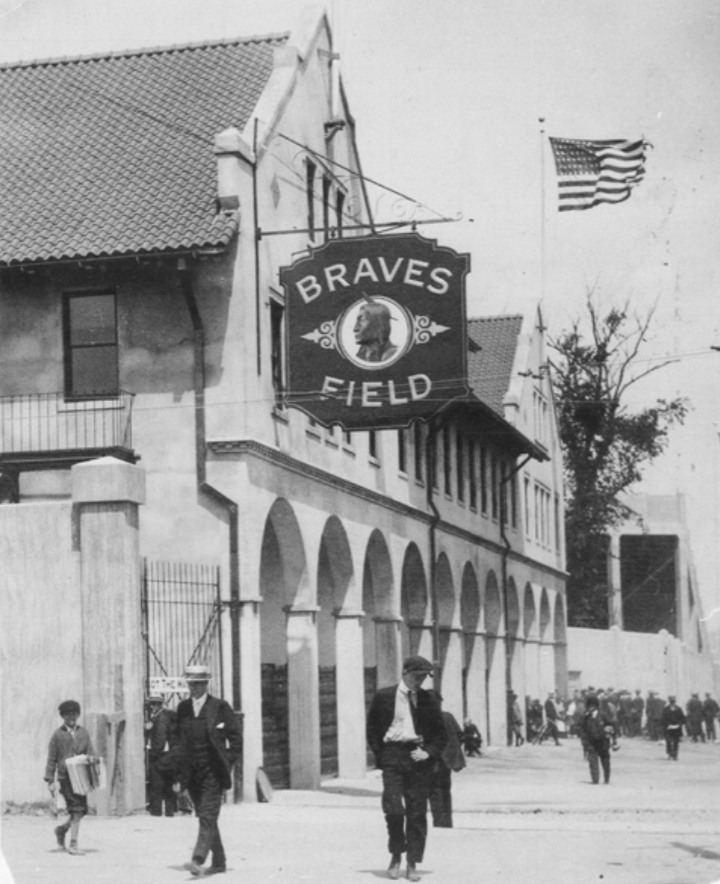 A brief glance at the box score for the mid-August game between the Boston Braves and the St. Louis Cardinals makes it appear that the Braves’ 3-1 win was a standard affair. However, the August 18, 1915, contest between these two teams was anything but normal. While the game flowed in fairly typical fashion, with a nice pitchers’ duel resulting in only a handful of hits and few runs, it was the rest of the occasion that made this game stand out in the history of the Boston Braves.

On a fair day by most accounts, the game proceeded in fairly usual fashion. Braves starter Dick Rudolph threw a complete game, holding the Cardinals to eight hits and one walk while striking out six. Rudolph wasn’t the only one who turned in decent pitching either. While giving up three runs, the Cardinals’ Harry “Slim” Sallee held the Braves to five hits while striking out two before being relieved by Lee Meadows in the top of the eighth inning. Were it not for the five walks surrendered by Sallee, the outcome of the game may have been different. As it happened though, the Braves took a three-run lead into the ninth inning before the Cardinals’ Tom Long was able to drive in Bob Bescher for a meaningless run.

The Braves, on the other hand, started their scoring early. In the second inning, “[Braves left fielder Sherry] Magee hit a fly, which Bescher came in from deep left for and, after a long run, got his hands on, but could not hold.”1 This Texas Leaguer, combined with a poor throw to the infield, allowed Boston’s Magee to advance to second. After a sacrifice by Butch Schmidt advanced Magee to third, Rabbit Maranville used one of his two hits in the game to drive in the Braves’ first run. The Braves finished their scoring in the fourth inning when catcher Hank Gowdy plated two by hitting a double to the right-field gap. This proved to be more than enough scoring, allowing the Braves to emerge victorious. However, neither the pitching of Rudolph nor the offense of Maranville and Gowdy was the star that day. Instead, the star of the day was the field itself –this was the first game played at the new Braves Field. The Braves had played the earlier portion of the season at nearby Fenway Park, courtesy of the Boston Red Sox.2

Located just off Commonwealth Avenue in Allston, Braves Field was hailed as “the finest baseball park in the world.”3 Construction under owner James E. Gaffney commenced just before the 1915 season, in March.4 And even though Gaffney built the biggest ballpark of the time, the expansive facility turned out not to be big enough to hold all who were interested in attending. With seating for between 43,000 and 45,000, by far the largest in baseball at the time, the Braves still ended up turning away 6,000 fans, even after they exceeded capacity by allowing an estimated 46,000 fans through the gates.5 Those who were able to get through the turnstiles were not your typical crowd, either. A host of dignitaries were there, including Boston Mayor James Michael Curley, along with 12 other Massachusetts mayors.6 In addition to political notables, a number of baseball men were present for the opening game. These included Charles Ebbets, president of the Brooklyn Robins; Chicago Cubs president Charles Thomas; National League President John Tener; and National League Secretary John Heydler.7

The special guests weren’t only in the stands. The first pitch, a strike, was thrown out by Washington manager Clark Griffith and caught by Braves manager George “The Miracle Man” Stallings.8 In addition to the baseball and political dignitaries among the 46,000 in attendance were 10,000 children from the Boston area.9 Also there were 300 members of the Royal Rooters who “as usual, were quick to appreciate the good plays and to encourage anything that looked like a rally.”10 In addition to the Royal Rooter band, who “were out full force with their band and singers and making themselves heard as in the days when ‘Tessie’ was new,”11 the 9th Regiment Band was also on hand to add to the cacophony of the day.12 Finally, according to the Boston Globe, “there were fans from every walk, oldtimers galore, and probably not less than 6000 women, the greatest outpouring of the fair sex that the game probably ever has known.”13

While the game and the crowd were something to see, the field itself was what really took the day. With ceremonies that included the raising of the world’s championship pennant, the field itself was massive. Sod from the Braves’ former home at the South End Grounds had been transported to help form the infield at the new park. The distance down the foul lines was 375 feet to both poles. Dead center was 440 feet and right center was a monstrous 520 feet.14 None other than Ty Cobb declared that a ball could not be hit over the fence at the new park.15 In addition to Cobb, other baseball notables, including Hughie Jennings and Clark Griffith, claimed “that it is all that a modern baseball plant should be.”16 The greatness of the park extended beyond the field as well; the clubhouses under the grandstands were equipped with showers, there was plenty of office space, and there were 22 box offices and 28 turnstiles to allow for the large crowds to be accommodated.17

Even though the afternoon started out in spectacular fashion, with opening ceremonies that included raising the championship flag, followed by a great performance by the Braves, it had to come to an end. With a 3-0 lead in hand heading into the seventh, many of the Braves fans began to leave as quickly as they had arrived.18 While the splendor of the new park was something to behold, at the end of the day this was another ballgame and another Braves win. As a result, the fans left happy and “the pleasure was due mainly to the fact that the Boston club won from St Louis by a score of 3 to 1; that there was a lot of good playing and very little that was not up to standard.”19

The rivet tappers are silent,
Thee grumbling crusher is still
And here is the thing they’ve fashioned, the work of the noisesome mill.
Tier upon tier it rises,
A gray and a lofty pile,
As grim in its stony casings
As the mark of a Gorgon smile.

But it ain’t any further, kid, from the plate to second;
It’s big an’ gran’ an’ elegant, but get this in yer dome:
Them sacks are measured out jus’ like you always reckined
And it’s the same ol’ erround’ from home-ta-home.

2 See Bill Nowlin, “The Time(s) the Braves Played Home Games at Fenway Park,” in The Miracle Braves of 1914: Boston’s Original Worst-to-First World Series Champions (Phoenix, Arizona: SABR, 2014), 320-327.The Braves were able to return the favor by allowing the Red Sox to play the 1915 World Series in the larger-capacity Braves Field.