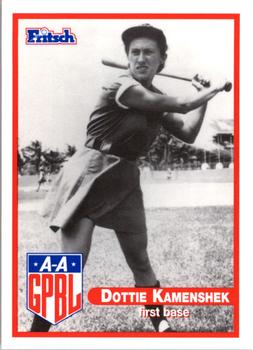 The under-achieving Rockford Peaches were for all intents and purposes playing out the string on the 1947 season. Heading into their August 18 doubleheader against the Racine Belles, they were 13½ games out of the final playoff spot with two weeks remaining on the All-American Girls Professional Baseball League (AAGPBL) schedule.1 The Peaches were left playing for pride and, in some cases, individual honors. One such case was Dorothy “Dottie” Kamenshek’s quest for her second consecutive batting title.

The 21-year-old Kamenshek had firmly established herself as one of the AAGPBL’s biggest stars.2 A left-handed first baseman, she was already in her fifth season in the league after breaking in with the Peaches in 1943 at age 17. In addition to being a great hitter, Kamenshek was widely regarded as the best fielding first baseman in the league,3 and she was also an adept baserunner, having stolen 109 bases in 1946.4 “Kammie had no weakness,” said Lavonne “Pepper” Paire, an AAGPBL player for 10 seasons. “She hit left-handed line drives and was a complete ballplayer.”5

Star hurler Jean Faut described Kamenshek as a “punch hitter” who hit the ball where it was pitched.6 That approach helped earn her the 1946 batting championship with a .316 average, which was an impressive 113 percentage points better than the league batting average. Kamenshek was the only hitter to break the .300 mark that season.

The Peaches appeared to have plenty of talent to compete for the pennant in 1947, but they struggled under rookie manager Eddie Ainsmith.7 After Rockford went into a prolonged midseason slump, Ainsmith was axed on August 2 and replaced by Bill Edwards.8 The managerial change seemed to give the Peaches a boost, and they were playing better baseball by the time they faced the defending champion Belles on August 18.9

Racine, with a 59-38 record, came into the doubleheader a half-game behind the first-place Muskegon Lassies.

Rockford won the first game of the twin bill, 1-0, on a five-hit shutout by Lois “Flash” Florreich.10

The nightcap featured a pitching matchup between a pair of right-handed side-armers.11 Nineteen-year-old rookie Lorraine Fisher (later Stevens) took to the mound for the Peaches, while the Belles countered with Anna May Hutchison, their ace. Hutchison had been Racine’s backup catcher for two seasons before being converted into a side-arm pitcher in 1946.12 She went 26-14 with a 1.59 ERA that season, and she was even better in 1947.13

Fisher and Hutchison engaged in a scoreless duel for the first 3½ innings of the second game.

The Peaches had a three-run outburst against Hutchison in the top of the seventh. With runners on second and third, Harrell hit a fly ball to deep center field to bring home the go-ahead run and give her three RBIs in the game.16 The cleanup hitter, Kamenshek, who had singled in each of her three previous at-bats, came to the plate next. She drove the ball deep to left field and over the head of Edie Perlick (later Keating) for a two-run homer.17

Racine scored a single run in the bottom of the seventh, cutting Rockford’s lead to 5-3.18

Fisher continued to falter in the bottom of the eighth. Betty “Moe” Trezza walked and stole second to open the inning.19 After Paire was retired on a popup, Perlick tripled to left field, scoring Trezza. Edwards pulled his rookie hurler in favor of Florreich, who had pitched seven shutout innings in the first game of the twin bill.20 The first batter Florreich faced, Eleanor Dapkus (later Wolf), laid down a perfect squeeze bunt,21 and Perlick scampered home with the tying run.

Racine’s workhorse, Hutchison, went back out to the mound for the ninth.22 After getting the first two outs of the inning, she hit Harrell with a pitch, bringing the dangerous Kamenshek to the plate for the fifth time. Kamenshek slammed a Hutchison offering to the same spot as in her previous at-bat – over Perlick’s head in left field – for another two-run homer.23 Her second consecutive opposite-field round-tripper gave the Peaches a 7-5 lead.

Florreich kept Racine off the scoresheet in the bottom of the ninth, giving her the win in both ends of the twin bill.

That same night, Doris Sams pitched a perfect game for the Muskegon Lassies, making the doubleheader sweep by the Peaches particularly costly for the Belles.24 The 1½-game swing left Racine two full games behind Muskegon, which held onto first place for the remainder of the season.

Racine finished in a second-place tie with the Grand Rapids Chicks, four games behind the Lassies. After losing a coin flip,25 Racine was forced to play Muskegon in the first round of the playoffs.26 The Belles upset the Lassies in the best-of-five series thanks to three victories from the indefatigable Hutchison. The 22-year-old hurler won two more games in the best-of-seven championship series against Grand Rapids, although it wasn’t enough. Hutchison was beaten by Mildred Earp, 1-0, in a heartbreaking Game Seven loss.27

Kamenshek and Audrey Wagner of the Kenosha Comets battled tooth and nail for the batting championship down the stretch. Their respective teams squared off in a four-game series in Rockford on the last weekend of the season, and the outcome wasn’t decided until the final inning.28 In the bottom of the ninth in the second game of a Labor Day doubleheader, Kamenshek came to the plate needing a hit to pull ahead in the batting race. The duo had been held hitless up to that point in the twin bill, dropping Wagner’s average to .305 and Kamenshek’s to .304.29 Kamenshek beat out an infield single, raising her average to .306. When the game ended moments later, she had won her second consecutive batting title.

The clutch hit did more than clinch the batting title – it denied Wagner the Triple Crown. The Kenosha outfielder finished the season with a league-leading 7 home runs and 53 RBIs in 390 at-bats. If Kamenshek had not registered a hit in her final at-bat, Wagner would have been the only batter to win the Triple Crown in AAGPBL history.30

Rockford finished a disappointing sixth in the standings with a 48-63 record.

The Peaches bounced back to win the playoff championship in each of the next three seasons, giving them four such titles in a six-year period (1945, 1948-50). Kamenshek was one of the big reasons why Rockford became the most successful team in AAGPBL history.

The team paid tribute to its star player by holding a “Kamenshek Night” on August 19, 1950, and over 3,000 fans came out to show their appreciation.31 She was given $800 in cash and a literal truckload of other gifts when the game was paused after the fifth inning.32 Kamenshek, who had started on a physical-education degree at the University of Cincinnati during the previous offseason, planned to use the funds to further her studies.33

Kamenshek was chosen as the AAGPBL’s All-Star first baseman from 1946 until 1951, and she would have garnered several more selections had the league not started naming All-Star teams until 1946. Her streak of six straight All-Star selections was broken when she sat out the 1952 season because of a back injury.34

She made a comeback attempt in 1953, but injuries limited her to only 188 at-bats, forcing her to retire permanently after the season. “I had a back injury, and I just couldn’t keep going,” she recalled. “I was physically hurting – it wasn’t fun anymore.”35

After a physical therapist helped Kamenshek recover from a knee injury, she decided to change her area of study. She enrolled at Marquette University, graduating in 1958 with a degree in physical therapy.38 She moved to California in 1961 and worked as a staff physical therapist, supervisor, and chief of therapy services for the Los Angeles County children’s services agency.39 She retired in 1980, working part-time with acute-care patients for another six years.

Kamenshek recognized that her AAGPBL experience had a big impact on the rest of her life. “Baseball gave a lot of us the courage to go on to professional careers at a time when women didn’t do things like that,” she said.40

In addition to the sources cited in the Notes, the author consulted AAGPBL.org and The All-American Girls Professional Baseball League Record Book. Box scores and standings were referenced in the Kenosha Evening News, South Bend Tribune, and Racine Journal-Times. 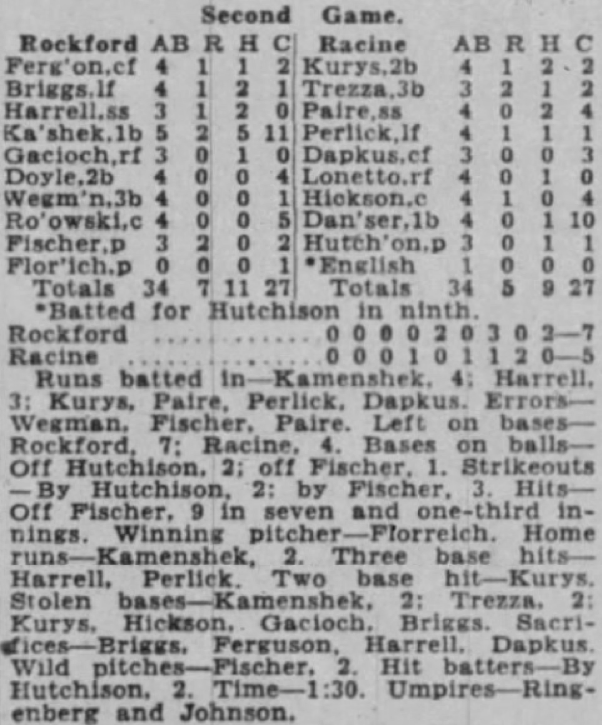 1 The top four teams in the All-American Girls Professional Baseball League qualified for the playoffs in 1947.

2 Kamenshek had won the batting championship and been named the league’s All-Star first baseman in 1946.

4 “I could have stolen more, but our manager wouldn’t let us steal unless it meant something in the game,” Kamenshek once said. Holway, “Kamenshek, the All-American: Was This Baseball’s Greatest Fielding First Baseman?”

7 Bill Allington had managed the Peaches in 1945 and 1946. They won the league championship in 1945 and went all the way to the final round of the 1946 playoffs before losing to the Racine Belles. Allington didn’t manage in 1947 because he had a job as a technician in a Hollywood movie studio and he needed two more months of service to earn his union card. He returned to manage the Peaches from 1948 to 1952, and they won the league championship in three consecutive seasons (1948-50). He also managed the Fort Wayne Daisies in 1953-54. Allington is the winningest manager in AAGPBL history. Jim Costin, “Jim Costin Says,” South Bend Tribune, April 18, 1947: 33.

9 Rockford had a 31-47 record when Ainsmith was fired. The Peaches had gone 8-10 under Edwards between August 3 and August 17, including winning four of five games from first-place Muskegon just prior to their series with Racine. Edwards finished the season with a managerial record of 17-16. “Peaches Back on Wednesday,” Rockford Register-Republic, August 19, 1947: 13.

11 All AAGPBL pitchers were required to throw side-arm in 1947. Overhand pitching was introduced in 1948.

12 Side-arm pitching with certain restrictions was introduced to the AAGPBL in 1946. Since not all underhand pitchers were able to effectively transition to the side-arm delivery, it was relatively common for hard-throwing position players to be converted into pitchers in 1946. “Four AAGL Hurlers on All-Star Squad,” Racine Journal-Times, December 19, 1946: 36; Sargent, We Were the All-American Girls: Interviews with Players of the AAGPBL, 1943-1954, 12.

15 The box score in the Racine Journal-Times showed the Belles scoring a run in the bottom of the sixth, but according to the game story in the Rockford Morning Star, that run scored in the bottom of the fifth inning. The box scores in the Rockford Morning Star and Rockford Register-Republic also showed Racine scoring a run in the fifth and none in the sixth. The three newspapers offered no details on how the run scored. Sophie Kurys had an RBI in the game, although she could have driven in a run in either the fifth or seventh inning.

18 The Racine Journal-Times, Rockford Morning Star, and Rockford Register-Republic provided no details on how the Racine run was scored in the bottom of the seventh.

19 The author deduced that Trezza led off the inning. Paire popped out for the first out of the inning and Eleanor Dapkus (later Wolf) made the second out of the inning with her sacrifice bunt. “Belles Drop Doubleheader to Rockford, 1 to 0, 7 to 5.”

20 The author deduced that Fisher was pulled immediately after the Perlick triple. According to the box score, Florreich recorded two outs in the eighth inning and she didn’t give up any hits in the game. “Belles Drop Doubleheader to Rockford, 1 to 0, 7 to 5.”

21 The game story in the Racine Journal-Times did not mention if it was a suicide squeeze or a safety squeeze.

24 Doris Sams tossed her perfect game against the Fort Wayne Daisies. It was the third perfect game in the history of the AAGPBL. The previous two were thrown by Annabelle Lee of the Minneapolis Millerettes against the Kenosha Comets on July 29, 1944, and Carolyn Morris of the Rockford Peaches against Fort Wayne on July 6, 1945. “Sams, Lassie Pitcher, Hurls Perfect Game,” South Bend Tribune, August 19, 1947: 13.

26 Under the Shaughnessy playoff system, the first-place team played the third-place squad in one series and the second- and fourth-ranked teams squared off in the other.

30 Racine’s Joanne Winter was five RBIs short of the Triple Crown in 1954.

38 Etter, “A League of Her Own; Marquette Alumna Dorothy ‘Kammie’ Kamenshek, PT ’58, Is Said to Have Inspired Geena Davis’ Character in the Classic Movie.”