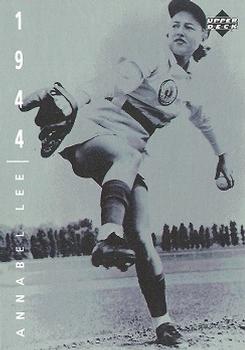 After a successful inaugural season in 1943, the All-American Girls Professional Baseball League (AAGPBL) expanded into Milwaukee and Minneapolis.1 It soon became obvious that the move into larger metropolitan areas was a mistake, as both teams struggled to draw fans.2 The Minneapolis entry, which had been previously known as the Millerettes and Lakers, picked up a third nickname in late July: the Orphans.3 The team drew so poorly at home that the original four franchises balked at the lengthy trips to Minnesota that yielded only a share of minuscule gate receipts.4 On July 22 the league decided that Minneapolis would play the remainder of its games on the road.5

The bad news kept coming for the Millerettes. In the next two days, center fielder Faye Dancer and catcher Lavonne “Pepper” Paire − both star players − were injured.6 On July 23 Dancer slammed into her teammate, shortstop Betty “Moe” Trezza, while in pursuit of a batted ball and injured her back.7 The next day Paire suffered a season-ending injury when she broke her collarbone in a home-plate collision with Racine’s Charlotte Smith.8

Minneapolis, made up almost entirely of AAGPBL rookies,9 had finished dead last in the season’s first half.10 The second-half outlook was equally bleak, especially with the team living out of suitcases for the remainder of the season. The Millerettes came into their July 29 game against the Kenosha Comets mired in the cellar with a 2-7 record.

The pitching matchup featured a pair of southpaws. Annabelle “Lefty” Lee (later Harmon) got the start for Minneapolis. Lee, a 5-foot-2 junkballer from North Hollywood, was part of the first wave of Californians to come into the league when it expanded to six teams in 1944.11 The 22-year-old’s repertoire included a dizzying array of off-speed pitches and a knuckleball.12

The Millerettes were looking for revenge against Kenosha’s starter, Mary Pratt.13 Minneapolis had jumped out to a 12-9 start in the first half, which was good enough for a share of first place on the morning of June 14. Later that day, Pratt tossed a seven-inning no-hitter against Minneapolis in the first game of a doubleheader.14 Pratt’s victory, coupled with a lopsided Kenosha win in the nightcap, knocked the Millerettes out of first place and helped send them into a first-half tailspin.

The Comets, winners of the first-half title, had gotten off to a slow start in the second half. Their 3-7 record had them in fifth place, five games behind the league-leading South Bend Blue Sox. Kenosha was decimated by injuries,15 leaving it without the services of four players, including outfielder Shirley Jameson and third baseman Ann “Tootie” Harnett.16 As a result, the Comets were forced to call on two Kenosha city league players to shore up their sparse bench.17

Minneapolis opened the scoring in the top of the first with a single run.18 The score remained 1-0 until the top of the third, when the floodgates opened against Pratt. Minneapolis scored five in the third, four in the fourth, and two more in the fifth to take a commanding 12-0 lead. Dancer’s replacement in center field, Margaret Wigiser, delivered the big blast with a grand slam to left field in the top of the fourth inning.19 Trezza also touched Pratt for a two-run shot.20 After giving up 11 hits and two walks in five innings of work, the shell-shocked hurler was replaced by Rose Folder (later Powell).

Lee, meanwhile, was cruising. She used a “change of pace and an assortment of baffling curves” to retire all 15 Kenosha batters through five.21

Folder temporarily stemmed the bleeding in the top of the sixth; the Millerettes resumed the onslaught in the next inning by scoring a single run. They followed that up with five more runs in the eighth, thanks in part to Trezza’s second round-tripper of the game, a three-run shot.22 The Orphans now led, 18-0.

Lee continued to completely shut down Kenosha. After extending her dominance to 24 consecutive outs, she turned her attention to the bottom of the order for the ninth inning. Lee set down Ruth Radatz,23 Lucille Colacito (later Appugliese), and Joyce Hill (later Westerman) in order, clinching the first perfect game in AAGPBL history.24

Lee struck out five Kenosha batters, and only three balls were hit out of the infield − all were caught by the center fielder, Wigiser.25 Minneapolis infielders made several “flashy” plays behind Lee to preserve the perfect game.26

Only 8 of the 18 Minneapolis runs were earned, as Kenosha committed nine errors. Four of those miscues were charged to Phyllis “Sugar” Koehn, who had been moved from her regular outfield post to cover third base for the injured Harnett.

The Comets wound up in fourth place in the second half with a 62-54 record, 8½ games behind the first-place Milwaukee Chicks. The winners of each half met in the championship series,28 and for the second year in a row Kenosha came out on the losing end.29 The Comets remained in the league until the end of the 1951 season, although they never appeared in the championship series again.

Minneapolis finished last in the second-half standings with a dismal 22-36 mark.

Despite a 2.43 ERA that was ninth best in the league, Lee ended up with a losing record (11-14). Her perfect game was one of the few highlights of the team’s trying season, but all was not lost. “We were young, we were having a good time, and we had money in our pockets,” recalled Dorothy “Dottie” Wiltse decades later.30 “I mean, what more could you ask for? We didn’t care that we were the Orphans.”31

The Minneapolis team was moved to Fort Wayne, Indiana, for the 1945 season and renamed the Daisies. The solid nucleus of talent that had been assembled for the expansion Millerettes blossomed in Indiana. The Daisies, who were warmly embraced by the local community,32 advanced all the way to the championship series in 1945. They went on to become one of the most successful franchises in the AAGPBL. In the Daisies’ 10 seasons in Fort Wayne, they won three regular-season titles (1952-54) and made the playoffs eight times. But to the chagrin of their fans, they never won it all. The Daisies lost all five championship series in which they played.33

Lee had a career year in 1945 for Fort Wayne, posting a 1.56 ERA, which was sixth best in the league.34 On July 7 against the Grand Rapids Chicks, Lee narrowly missed throwing a second perfect game and settled for a no-hitter.35 Thelma “Tiby” Eisen, on a second-inning error by Paire, was the only Grand Rapids batter to reached base in the game.

A little more than a year after Lee’s no-hitter in Grand Rapids, her sister-in-law, Paula, gave birth to a son, William Francis Lee III.36 Annabelle passed on her pitching knowledge to the youngster, gave him his first left-handed glove, and became one of the biggest influences in his life.37 He grew up to become a lefty junkballer just like his Aunt Annabelle. Better known as Bill “Spaceman” Lee, he spent 14 years in the major leagues pitching for the Boston Red Sox and Montreal Expos. “I like to think I got my competitive nature from her,” he explained. Bill described her as “the best baseball player in the family, including me.”38

Annabelle was one of the few AAGPBL pitchers to successfully transition from underhand to side-arm and then overhand pitching.39 In addition to playing for Minneapolis and Fort Wayne, she also had stints with the Peoria Redwings (1946-47, 1949-50) and Grand Rapids Chicks (1947). She wrapped up her seven-year AAGPBL career after the 1950 season having compiled a 2.25 ERA and a 63-96 record.

She was married to US Army Technician Lloyd Harmon from November 1957 until his death in 1974. After her baseball playing days ended, she worked for two electronics companies in Los Angeles, retiring in 1985.40 Annabelle spent her retirement years in Costa Mesa, California, enjoying hobbies that included golf, knitting, and cooking.

On July 3, 2008, Annabelle “Lefty” Harmon died of breast cancer in a Vermont hospital not far from her nephew Bill’s home. She was 86 years old.

In addition to the sources cited in the Notes, the author consulted AAGPBL.org, The All-American Girls Professional Baseball League Record Book, and Ancestry.com. Box scores and standings were referenced in the Kenosha Evening News and South Bend Tribune. 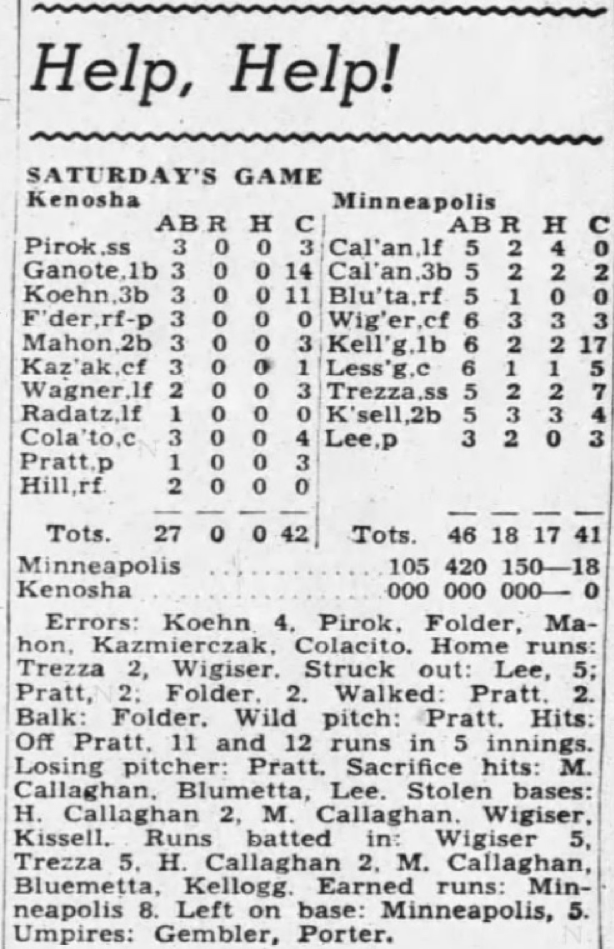 1 The expansion into Milwaukee and Minneapolis made the AAGPBL a six-team league in 1944. The original four teams were the Kenosha Comets, Racine Belles, Rockford Peaches, and South Bend Blue Sox.

6 On top of playing stellar defense, Dancer had led the league in hitting in the first half with a .313 batting average. Eddie McKenna, “Dancer, Paire, Injured Millers, Healing Here,” Kenosha Evening News, July 27, 1944: 10.

9 Utility player Irene Ruhnke played for the Rockford Peaches in 1943. All other Minneapolis players were AAGPBL rookies in 1944.

11 There were four Californians on the Minneapolis Millerettes: Lee, Faye Dancer, Pepper Paire, and Dorothy “Dottie” Wiltse. Lois Browne, Girls of Summer; In Their Own League (Toronto: HarperCollins Publishers Ltd., 1992), 50-52.

13 Pratt started the season with Rockford. She was reassigned to Kenosha on June 6 because of injuries to the top two pitchers on the Comets, Helen Nicol and Elise “Lee” Harney. The AAGPBL reserved the right to reassign players from one team to another whenever it was in the league’s best interests. Eddie McKenna, “Mary Pratt, Southpaw Pitcher, Newest Comet,” Kenosha Evening News, June 7, 1944: 8.

16 Kay Heim (later McDaniel) and Janice “Jerry” O’Hara were also out with injuries. Jameson and Harnett were key components of Kenosha’s offense.

17 The two players added to the Kenosha roster were Joyce Hill (later Westerman) and Ruth Radatz. Both players made their AAGPBL debut in this game. Hill came in and replaced Folder in right field when the latter came in to pitch in the sixth inning. She went 0-for-2 in the game. Radatz entered in the late innings to play left field; she went 0-for-1. Neither player had signed an AAGPBL contract. Eddie McKenna, “Lee, Minneapolis, in Perfect Pitching Victory Saturday; VFW Program Carded Tonight,” Kenosha Evening News, July 31, 1944: 5.

18 Play-by-play descriptions of this game in the Kenosha Evening News and South Bend Tribune were not detailed.

20 The Kenosha Evening News reported that Trezza homered off Pratt in the fifth inning. The South Bend Tribune said it was in the third. Based on the line score, either was possible.

22 The Kenosha Evening News reported it as a three-run home run, while the South Bend Tribune said it was a two-run shot. The home runs were the only two Trezza hit all season (194 at-bats).

23 As of November 2021, this was believed to be Radatz’s only career plate appearance in the league. No other AAGPBL box scores containing her name had been uncovered. Radatz went on to have a distinguished career in local politics. She became a city alderman in 1964 and became the first female president of the Kenosha city council. “Ruth M. Radatz, Ex-city Official,” Kenosha News, November 3, 1997: B3.

27 Roughly 16½ years after this game, Helen Candaele gave birth to a son, Casey. Casey Candaele went on to have a nine-year major-league career with the Montreal Expos, Houston Astros, and Cleveland Indians. As of 2021, they were the only mother-son combination to play professional baseball.

28 The league began using the Shaughnessy playoff format in 1945. The playoff series played in 1943 and 1944 was called the “Scholarship Series.” The winning team was awarded a $1,000 scholarship to be given to a local high-school student. W.C. Madden, The All-American Girls Professional Baseball League Record Book (Jefferson, North Carolina: McFarland & Company, 2000), 2-3.