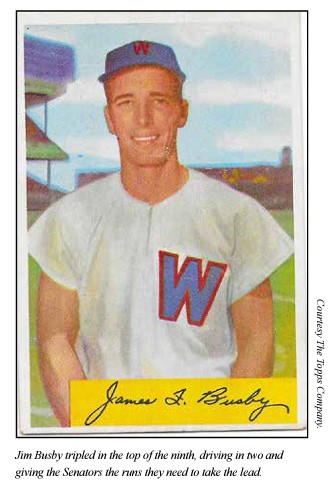 The Yankees were cruising to their fifth straight AL pennant in 1953 when they took on the Senators in New York for a three-game series beginning on August 18. The Nats1 had just split a doubleheader in Boston with the Red Sox, while the Yankees had won four straight after pummeling the sixth-place A’s in both ends of a doubleheader in Philadelphia.

New York, a winner of 18 in a row beginning in late May, stood at 79-37, nine games ahead of second-place Chicago. Washington was 58-60 in fifth place. The Senators had lost seven of eight meetings at Yankee Stadium and had won just five of 17 games between the two teams thus far.

The Yankees could be merciless on second-division teams. After losing to the Nats in Washington, 2-1, on August 11, the Yanks crushed the Senators 22-1 the next night and beat them 6-1 the following night. After a 9-8 loss to the Athletics on August 15, the Yankees rode roughshod over the A’s in doubleheaders the next two days (8-0, 7-3 and 10-3, 9-0).

A paid crowd of 24,599 came to the Tuesday night contest, which featured a pregame performance by the popular baseball acrobat Jackie Price.2 Although baseball broadcasts had become a TV staple in New York, this game was blacked out.3

Left-hander Bill Miller, called up two weeks earlier from Kansas City, started for New York. Veteran lefty Johnny Schmitz, waived by the Yankees in May, was Washington’s starter. Schmitz had beaten the Yankees with six innings in relief on July 5, but lost to them in a four-inning relief stint a week later. New York had scored only two runs against him in 10 innings.

The Nats’ shoddy fielding led to the Yankees scoring twice in the first. With a runner on and one out, shortstop Pompeyo Davalillo4 booted Mickey Mantle’s double-play grounder. Schmitz then walked Yogi Berra. Hank Bauer grounded to Nats first baseman Mickey Vernon, who “made an indecisive play … finally tossing to Schmitz, who was charged with an error when he failed to touch the bag,” the Washington Post’s  Shirley Povich wrote.5 Gil McDougald scored on the play. Gus Triandos hit a slow grounder that Davalillo also mishandled. Mantle scored on what was ruled an infield single, but Berra rounded third too far and was caught in a rundown and tagged out. Both runs were unearned.

Schmitz walked Phil Rizzuto to lead off the second. Miller tried to sacrifice, but Rizzuto was forced out. Singles by McDougald and Bill Renna scored Miller. Then Mantle again grounded to Davalillo. From second, Renna ran into the shortstop as he fielded the ball. Davalillo tagged Renna and threw on to first in time to get Mantle. A double play would have ended the inning, but Renna was called out for interference, and the ball was dead. The fielder’s choice put Mantle on first. “A lucky break on an umpire’s call helped the Bombers,” Roger Kahn wrote in the New York Herald Tribune. It allowed Berra to bat with two men on. His line-drive homer into the right-field seats, Berra’s 22nd and his eighth against Washington, put New York up 6-0.

Clyde Vollmer’s homer to left with one out in the fourth was all the Nats could muster against Miller through seven innings. The Yankees, meanwhile, scored twice more in the fifth against Sonny Dixon, who had taken over for Schmitz.

Berra led off the fifth with a bloop double to center “on which (Jim) Busby did not distinguish himself,” Povich wrote. Bauer followed with a homer to right, his eighth of the season, making the score 8-1. The homer extended Bauer’s modest hitting streak to 13 games.6

“Soon afterwards, complacent Yankee fans started filing toward the exits to miss one of the most uproarious finishes seen at the Stadium in a long time,” Kahn wrote.7

The Yanks threatened again in the sixth. Two leadoff singles put runners on the corners, but Mantle lined to Vernon, who turned it into a double play. A groundball double play helped keep New York off the board in the seventh after the first two batters reached.

Washington chipped away with two solo home runs in the eighth against Miller. With one out Vernon, 3-for-18 in the past four games, “hit a whistling homer into the right-field seats,” Povich wrote. With two outs, Vollmer hit his second homer of the game, deep to left.

Righty Jerry Lane, a rookie called up in July, retired the Yankees in order in the eighth. The game went to the ninth with New York leading 8-3.

When Nats catcher Ed Fitz Gerald led off the top of the ninth with a single, Yankees manager Casey Stengel went to the mound to lift Miller, “to the annoyance of the crowd,” Joseph M. Sheehan wrote in the New York Times.8

Stengel brought in Allie Reynolds, the Yankees’ most effective late-inning reliever that season. It’s likely that with a five-run lead, Reynolds had little time to warm up in the bullpen. He threw a wild pitch before walking pinch-hitter Gil Coan. Having used three pinch-hitters already, Nats manager Bucky Harris sent up ace starter Bob Porterfield to bat for Lane. Reynolds struck out Porterfield on three fastballs.9

Eddie Yost began the scoring onslaught with a single that brought in Fitz Gerald. A walk to Mel Hoderlein loaded the bases for Vernon, still the league’s leading hitter at .330. Reynolds fell behind 3-and-1 before Vernon hit a ball off the wall in the right-field corner that caromed away from Bauer. Vernon cleared the bases and ended up with a triple, where he represented the tying run.

“Out dashed Stengel to the mound to a chorus of boos,” Sheehan wrote.10 Right-hander Tom Gorman came in and got two quick strikes on Jackie Jensen before walking him.11 Vollmer’s ground single to left scored Vernon and tied the game.12

“Casey came back on the field to the tune of even louder derisive hooting” and brought in veteran righty Johnny Sain.13 Busby, his first batter, fouled off two pitches before hitting “a long drive to center that should have been caught,” Sheehan wrote. Mantle, “back in the lineup after ten days … with a wrenched knee,” had persuaded Stengel that he was well enough to return to center field .14 Stengel “can now tell Mantle to save his suggestions,” Kahn wrote.15

Busby’s triple scored Vollmer and Jensen. Mantle recovered in time to relay to Billy Martin at second, who threw out Busby trying for an inside-parker, at home, but the damage was done.

Connie Marrero, a 42-year-old Cuban right-hander, retired Mantle and Berra in the bottom of the ninth.16 Then Yost ended the game, diving to his left to snare Bauer’s sharp liner. Lane was the winning pitcher, the first of his two major-league victories. Gorman was charged with the loss.

The Senators finished at 76-76, the last time while in Washington that the team avoided a losing record. The Yankees ended the season with 99 victories and won the World Series. So if nothing else, this game kept them from winning 100 in the regular season.

1 Washington was still officially the Nationals, which accounts for the shorthand “Nats” and subsequent references to the team in game stories. Yet just about everybody called them the Senators. The name Nationals was not officially abandoned until after longtime owner Clark Griffith’s death in October 1955.

2 Price, who played with the 1946 Indians, could do amazing things with baseballs in incredibly absurd positions. He could bat or throw strikes with his body upside down and, among other things, catch long fly balls in the outfield while riding a jeep. As it was said then, you had to see it (youtube.com/watch?v=_Jflun5CyIc) to believe it. But as fewer people attended the mostly minor-league games at which he would perform, he couldn’t make a living. He took his own life in 1967.

4 Davalillo, nicknamed Yo-Yo, stood just 5-feet-3. He had been called up and made his debut on August 1. The brother of Vic Davalillo, he appeared in 19 games in 1953, his only time in the majors.

6 Bauer was hitless the next day, as was Irv Noren, who extended his hitting streak to 11 games in this one.

16 Marrero was almost 103 years old when died in Cuba in 2014, the oldest former player at the time. This was one of two games the 5-foot-5 right-hander saved in 1953 and the only two games in which he appeared in relief.