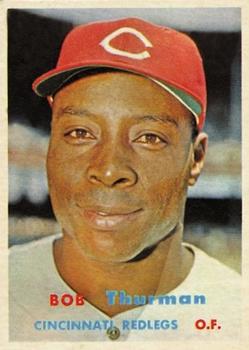 On Saturday, August 18, 1956, the Cincinnati Redlegs and Milwaukee Braves combined to hit 10 home runs, tying a major-league record (at the time) as the Redlegs came away with a 13-4 victory at Crosley Field in front of a crowd of 30,244, fans, including 8,772 ladies night guests. It was an early-arriving crowd; the bleachers were jammed to capacity half an hour before game time.

The Braves starter, Ray Crone, whom the Redlegs had defeated 8-1 in Milwaukee on August 10, came into the game with a 9-7 record. Cincinnati’s John Klippstein, with an 11-9 record, toed the rubber for the home team. The National League race was very tight. The Braves were in first place with a 68-44 record; the Redlegs were in second place, 2½ games back at 67-48, and the Brooklyn Dodgers were 3 games back at 65-47.

The Braves’ Danny O’Connell led off the game with a double to left, running his hitting streak to 14 games. Johnny Logan followed with a single, moving O’Connell to third. Henry Aaron struck out, but the Braves scored when Eddie Mathews hit a sacrifice fly to center field. Joe Adcock popped out to the catcher, ending the inning. Crone set the Redlegs down in order in the bottom of the first.

Bobby Thomson singled to lead off the second inning for the Braves and advanced to second on Billy Bruton’s single. Toby Atwell, in the starting lineup replacing Del Crandall, who had been injured the night before, fouled out to the catcher. Crone’s bunt by Crone advanced the runners, but O’Connell popped out to shortstop for the third out.

The Redlegs tied the game in the bottom of the second inning but it could have been worse. Cincinnati loaded the bases with nobody out on singles by Ted Kluszewski, Wally Post, and Ed Bailey. Kluszewski scored on a fly to left by Alex Grammas, but Crone got Roy McMillan out on a fly ball and Klippstein on a force-play grounder to third.

After a three-up-three down by the Braves in the top of the third inning, the Redlegs broke through for four runs and a 5-1 lead in the bottom of the inning. After Johnny Temple flied out to right, Frank Robinson hit a solid line-drive homer over the left-field fence that landed on the roof of “The Laundry,” the Superior Towel and Linen Service building across the street. Bob Thurman doubled and Kluszewski homered to center field, right near the right-field goat run. The goat run was one of the changes made to Crosley Field when in 1946 seats were added in right field in front of the right-field fence. Braves manager Fred Haney brought in Bob Buhl to relieve Crone, and he was greeted by a towering home run over the 380-foot marker in right-center by Post. Buhl retired the next two batters, Bailey and Grammas, on groundouts to the pitcher.

Aided by the home-run ball, the Braves came right back, scoring three runs in the top of the fourth and narrowing the Redlegs’ lead to 5-4. Adcock led off the inning with a round-tripper that went over the scoreboard just to the right of the clock. Thompson grounded out to short but Bruton doubled and Atwell homered. Buhl and O’Connell grounded out to end the inning. The Redlegs went down in order in the bottom of the inning.

Logan led off the Braves’ fifth inning with a double and Cincinnati manager Birdie Tebbetts went to the bullpen for Hal Jeffcoat. With Aaron at bat Jeffcoat threw a wild pitch, advancing Logan to third base. But Jeffcoat shut the door, getting Aaron and Mathews had infield grounders and Adcock on a fly to right. In the bottom of the inning, Cincinnati made it 6-4 when Thurman homered.

Thomson walked to lead off the sixth inning, and was forced out on a Bruton groundball to second. Bruton advanced to second on Atwell’s grounder, and to third on Jeffcoat’s wild pitch while Wes Covington was batting for Buhl. Covington walked, putting runners on the corners, but O’Connell’s grounder to second forced Covington and ended the inning.

After Logan grounded out to lead off the Braves’ seventh inning and Aaron flied out to right, Mathews doubled to center, but was stranded when Adcock grounded out. The Redlegs added three runs to their lead in the bottom of the seventh by, how else? Home runs! Temple lined out to center, Robinson walked, and Thurman hit his second home run of the game into the right-field goat run. The next batter, Kluszewski, hit his second  home run of the game, giving the Redlegs a 9-4 lead.

After the Braves went down in order in the top of the eighth, the Redlegs padded their lead with four unearned runs off reliever Gene Conley in the bottom of the inning. Grammas reached base on an error by Logan and advanced to second on McMillan’s single to right. Jeffcoat sacrificed the runners to second and third. After Temple lined out to right, Frank Robinson hit a three-run home run, his 29th of the season. For rookie Robinson, 1956 was a great year. He batted .290 and hit 38 round-trippers, earning himself National League Rookie of the Year honors. Thurman was next up, and he smacked his third home run of the game. Dave Jolly replaced Conley and he walked Kluszewski and surrendered a single to Post, but got Bailey on a popup to third.

Jeffcoat got the Braves in order on three groundouts in the top of the ninth, and the Redlegs were 13-4 victors. Jeffcoat, who had given up just one hit in five innings after relieving Klippstein, got the win, making his record 4-2. Crone was tagged with the defeat, and his record fell to 9-8.

Fifteen of the 17 runs scored in the game were driven in by home runs: 12 of the 13 Redlegs runs, and three of the four Braves runs. Kluszewski and Robinson had two homers each and Thurman hit three, going 4-for-5 with four runs batted in and four runs scored.

Some interesting observations about the home runs: Thurman’s three homers gave him eight for the season. He didn’t hit any more for the remaining six weeks of the season. After the barrage of home runs, Cincinnati had 166 in 116 games. The record-holding 1947 New York Giants, who hit 221, didn’t reach that total until their 120th game. The Redlegs ended the season with 221 round-trippers, tied with the Giants. Their 221 total would remain a team record until 2005, when it was eclipsed by one. The Redlegs hit 44 homers against the Dodgers in 1956, a record for home runs against a team in a season that still stood as of 2017.

There were some fireworks after the game when manager Tebbetts got into a war of words with the Braves Joe Adcock. Afterward, Tebbetts said, “I was standing outside our clubhouse talking to someone when I heard someone yell: ‘Let me at the so-and-so.’ Who should it turn out to be but Joe Adcock. He apparently got sore because we had been yelling at him during the ballgame. Someone held him back by the little finger and he didn’t keep coming. But I didn’t back up. Let him go. It’s been a long time since my last fight, but I’ve never walked away from one yet.”1

In addition to the source cited in the Notes, the author also accessed Retrosheet.org and Baseball-Reference.com.