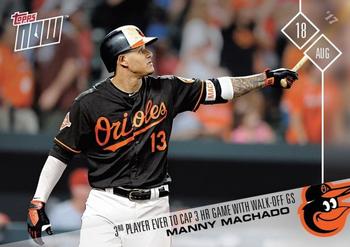 “It’s always good when you get into a situation where you can put your team on top. It was a good day. Our ballclub, we kept fighting to the end. That’s what we do. We fight till the last out is made, and we’re not going to stop fighting.” – Manny Machado1

For much of the 2017 season, the bullpen had been the Angels’ strong suit and a big reason why they were in the second wild-card spot. They had plenty of company, though, as there were seven teams within three games of the Angels, including this night’s opponent, the Baltimore Orioles.

The Angels’ strong bullpen started to crack by the end of July as they lost not one, but two games in a most improbable fashion, allowing a walk-off grand slam. On July 25 Edwin Encarnacion hit a game-winning grand slam off Bud Norris in the bottom of the 11th, giving the Cleveland Indians an 11-7 victory. Five days later, Norris gave up another walk-off grand slam, to Toronto’s Steve Pearce, making the Blue Jays 11-10 victors. To add insult to injury, the Angels led 10-4 in bottom of the ninth.

The two walk-off slams cost Norris his job as closer and sent the Angels bullpen into disarray, as none of them had an assigned role. The Angels were going to need their bullpen to be strong for this game; their starter, Andrew Heaney, was making his first start since returning from Tommy John surgery. At the hitter-friendly Camden Yards, asking for length from Heaney was not a realistic request.

The Angels wasted no time providing Heaney with run support. Ben Revere led off the game with a double off Orioles starter Jeremy Hellickson, the 2011 AL Rookie of the Year who had been acquired at the trade deadline from the Philadelphia Phillies. Two batters later, Albert Pujols ripped a line drive that just cleared the left-field fence, giving the Angels a 2-0 lead. Pujols’ 609th career home run tied him with Sammy Sosa at eighth on the all-time list and also tied him with fellow Dominican Republic native Sosa for the most home runs by a foreign-born player. Kole Calhoun followed Pujols with a blast to center field, giving the Angels a 3-0 lead.

Leading off the top of the second, C.J. Cron blasted another shot into the left-field seats, and the Angels led 4-0. Two batters later, Kaleb Cowart crushed a Hellickson fastball into the right-field seats, and it was 5-0. At this point, Hellickson had surrendered four home runs and secured only four outs.

Former Angel Mark Trumbo got the Orioles on the board in the bottom of the second with a towering solo home run to left.

Caleb Joseph’s leadoff fly ball in the third just cleared the left-field fence, nudging the Orioles a little closer at 5-2. After Tim Beckham singled to right, Manny Machado deposited a 2-and-2 offering from Heaney into the right-center-field seats, cutting the Angels lead to 5-4.

After an uneventful fourth inning, the Angels got back to teeing off Hellickson with Revere smacking another double. After working a full count, Mike Trout crushed a pitch into the left-field seats, extending the Angels’ lead to 7-4. Calhoun’s single chased Hellickson, who finished the night with 4⅔ innings pitched and seven runs allowed on eight hits, five of which were home runs.

Machado led off the bottom of the fifth with his second home run of the game, this time a blast to left-center field, bringing the Orioles a little closer, 7-5. Heaney retired the next three Orioles and ended his night with five innings pitched and five runs allowed on seven hits, four of which were home runs. The teams had combined for nine home runs through five innings.

Heaney did strike out five Orioles. “It was good to see him out there,” manager Mike Scioscia said. “Everything we’re looking for is there with the exception of when he had chances to put some guys away, he wasn’t able to make pitches. As he gets into his next start, he’ll get better.”2 Of his first major-league start since Tommy John surgery, Heaney said, “Those guys went out and put up five runs in the blink of an eye. It’s my job to make that stick. I didn’t do that. I didn’t really develop a feel for a breaking ball. I threw a lot of two-strike pitches in the strike zone. Really never got into a rhythm. My tempo was pretty terrible. All those things lead to bad pitches and lead to big innings. That’s on me.”3

Petit took the mound in the bottom of the ninth and gave up a single to Anthony Santander, a Rule 5 draft pick making his major-league debut. (Santander had made a great diving catch robbing Trout of an extra-base hit to end the top of the second inning.) Petit walked Seth Smith, who was pinch-hitting for Craig Gentry, to put the tying runs on base with one out. Scioscia called on 23-year-old Keynan Middleton and his 99 mph fastball to close out the game. Middleton fell behind 2-and-0 to Tim Beckham before giving up a single to right field and loading the bases for Machado, who had already homered twice. Machado crushed a 98 mph fastball that caught too much of the plate into the Orioles bullpen, where it was caught by pitcher Zack Britton. Machado’s third home run of the game was a walk-off grand slam.

Machado’s slam was the 10th home run of the game. “It was like a [basketball] game where everybody’s dunking,” Orioles manager Buck Showalter said. “What was it, 10 home runs? It was like, ‘No shots tonight from the field, everybody dunk.’”4

To Middleton’s credit, he wouldn’t allow the tough ending to get the best of him. “I’ll go home and get some sleep and be back tomorrow. Hopefully I’ll get the same opportunity tomorrow. I’m just going out and attacking hitters, doing what I do. I’ll come out tomorrow and do the exact same thing.”5

The loss dropped the Angels into a tie with the Minnesota Twins, who had defeated the Arizona Diamondbacks 10-3. The Twins eventually clinched the second wild-card spot.

In addition to the sources cited in the Notes, the author consulted Baseball-Reference.com and YouTube.