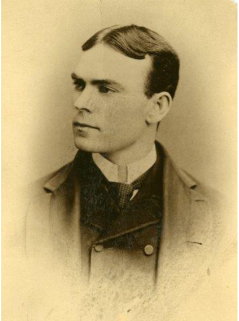 “The Reds were woefully weak with the willow, not being able to hit beyond the diamond and not scoring a base hit in thirty times at bat.”1 That was the brief description by the Boston Globe of Larry Corcoran’s no-hitter on August 19, 1880, the first of three in his career. These were the days before the phrase “no-hitter” was even used. The Cincinnati Enquirer wrote “There were no special features of interest,” although “the Bostons received a most thorough trouncing from the Chicagos today, the visitors failing to secure a single hit off Corcoran.”2 While a modern no-hitter would be analyzed by studio hosts and top defensive plays of the game regularly repeated, in 1880 most newspapers didn’t have a summary of the game, let alone a mention of a great pitching feat.

The Chicago Tribune gave a little more detail, writing that the 2,000 fans present “saw something that never before occurred on the Chicago grounds — that is, a game in which the defeated team obtained neither a tally nor a base-hit.”3 The Cincinnati Commercial Tribune spent two of its six sentences of coverage in a lackluster comment that “Rain also caused a cessation of play. All this prolonged the game to nearly three hours.”4

While a pitcher throwing a no-hitter today is a top story on sports stations, the Tribune simply concluded, “the game of yesterday merits little in the way of description.”5 The Chicago Inter-Ocean said, “The Boston nine were treated to a fine, though unwelcome, basketful of goose-eggs.”6 They surely didn’t make much ado about nothing … nothing in the hit column, that is. In his short career, Corcoran still became the first pitcher to throw three no-hit gems, a feat matched only by Cy Young and Bob Feller, and surpassed by Sandy Koufax and Nolan Ryan.

Corcoran had actually thrown a one-hitter nine days earlier against Providence, “but it remained for the Bostons to suffer the extreme effect of his great skills as a pitcher,” the Tribune wrote.7 His rookie season of 1880 saw him throwing (unfathomable by today’s standards) 536⅓ innings, on his way to a 43-14 record and a 1.95 ERA with 268 strikeouts. He completed 57 of 60 starts. Keeping up this torrid pace for five years, Corcoran was essentially finished because of a dead arm at the age of 25.

The White Stockings at 47-11 and 12½ games ahead of second-place Providence had all but won the National League pennant already. They had taken sole possession of first place on May 13 and hadn’t looked back since. They had a 21-game winning streak from June 2 to July 8, and finished the season an amazing 50 games over .500 (67-17). It was a Chicago year, as were the next two seasons, as the White Stockings won three pennants in a row.

The Red Caps had struggled the entire season, and were entering the game 26-32 and in the sixth-place position they would finish the year in. Boston pitching allowed the most earned runs and had the second highest ERA in the league, 3.08 (Buffalo had 3.09). That looks excellent to the modern fan, but in 1880 three clubs had ERAs below 2.00. The Red Caps’s starting pitcher this day, Tommy Bond, had also been a workhorse the past three years, throwing over 500 innings and winning over 40 games each year.

Chicago scored a run in the first inning “through a base-hit and [Abner] Dalrymple’s good running,”8 along with a muffed throw by John Morrill at first base. In the third inning Joe Quest singled and stole second, and Dalrymple walked. Hits by George Gore and Ed Williamson brought in two runs, only one being earned. “A fine running catch by [Charley] Jones was much applauded.”9 Chicago took a 3-0 lead. The rain delay in the third inning made the ball “mushy and shapeless for the greater part of the play,” the Tribune commented, “but that did not prevent the White Stockings from making eleven hits and thirteen totals off Bond and [Curry] Foley.”10 It is not known when right fielder Foley and Bond swapped places. Chicago, wrote the Inter Ocean, “batted Bond freely and would have similarly treated Foley, but for the soggy condition of the ball in the last two innings.”11

In the fourth inning Boston shortstop John Richmond, who had sprained a knee in Cincinnati the week before, reinjured himself and had to leave the game. Jim O’Rourke moved to center field and his brother John took over at shortstop.

Chicago scored three more runs in the sixth inning. Tom Burns singled, stole second, and scored on Corcoran’s hit. Corcoran wound up at third on Morrill’s muff of a throw from Tommy Bond. Corcoran scored on Quest’s single. Dalrymple reached on Jim O’Rourke’s error. Gore “sent the mushy ball over to [the] right-field fence for two bases,”12 and Quest scored. Gore went 4-for-4 in the game with two doubles.

The Red Caps were retired in order in seven of their nine innings. They had their first real chance in the ninth, courtesy of two errors.

With one out in the ninth, John O’ Rourke grounded to Quest, who bobbled the ball and threw wildly to first. O’Rourke made second. Jim O’Rourke followed with a grounder of his own to Quest “and he muffed this one too,” wrote the Tribune, placing the brothers at first and third. Sometime during the inning, Chicago catcher Silver Flint had “his right thumb put out of joint in the ninth inning, and in trying to pull it back to place the flesh was badly lacerated. It will probably disable Flint altogether for a fortnight at least.”13 Jim O’Rourke raced to second on an attempted hit-and-run, but Jack Burdock “batted Quest a fly, and Joe had the satisfaction of closing the inning and atoning for his bungling by a clever double play.”14 Jim O’Rourke was doubled up, the game was over, and Corcoran had his no-hitter on the wet Chicago grounds.

Others injured besides Flint were Boston’s second baseman Burdock, catcher Sam Trott, and Corcoran himself. Burdock “was hit in the ribs by one of Corcoran’s twisters. Trott had his finger banged by a foul tip … and Corcoran injured his ankle in running the bases — quite enough accidents for one day,” wrote the Inter Ocean. 15

The Inter Ocean noted that Chicago’s King Kelly “had neither run, base-hit, fielding play, nor error,” but Cap Anson “retired twenty-one of the twenty-seven Boston men without an error, equaling the best first-base record ever made. Add to these unusual features the fact that four men were seriously injured during its progress, and it might truly be said that it was a remarkable game.”16

The time of game was 2 hours and 30 minutes. “The umpiring was unexceptional,” the Inter Ocean commented.17

1 “What Is the Score? The Bostons Chicagoed and the Providences Winners,” Boston Globe, August 20, 1880.

6 “Boston’s Goose Eggs, Which the Hub Nine Received Yesterday at the Hands of the Chicago Club,” Inter-Ocean (Chicago), August 20, 1880.