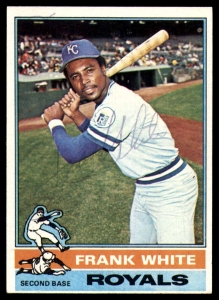 Motivated by the unusual antics of opposing rookie pitcher Mike Loynd, Kansas City Royals second baseman Frank White took a frenzied game into his own hands and powered the Royals to a come-from-behind win over Texas on August 19, 1986. However, White’s record-setting game would be squandered by the Royals in a disheartening season.

Mired in third place in the American League West Division, 12½ games behind the division-leading California Angels, the Royals were looking for something positive in their disappointing season. After all, they were the defending World Series champions.

The Royals had been playing near .500 through late June, before they suffered a disastrous 11-game losing streak. Then they lost popular manager Dick Howser at the All-Star break after it was discovered that he had a malignant brain tumor that required surgery.1 Mike Ferraro filled in as interim manager for the balance of the season, but the Royals could never get back on a winning track.

The night game on August 19 was played before 26,716 fans in Royals Stadium. Division rival Texas was in second place, 4½ games behind the Angels.

Loynd was the starting pitcher for Rangers manager Bobby Valentine. It was his sixth major-league start since he was drafted out of Florida State University in June. The 22-year-old right-hander had won the Golden Spikes Award as the best college player and had two major-league wins to his credit going into the game.

Ferraro went with Alan Hargesheimer as his starter. The 31-year-old righty had not started a major-league game since October 3, 1981, although he had made four relief appearances for the Royals this season.

In addition to Loynd, the Rangers had other recent college stars Pete Incaviglia and Oddibe McDowell, as well as 20-year-old rookie Ruben Sierra, in their lineup.

Each team scored a run in the first inning. Incaviglia drove in the Rangers’ run with a single, while White’s single plated the Royals’ score. The fireworks started early in the game when Ferraro was ejected in the first inning. He had objected to a call by second-base umpire Richie Garcia, who called Smith out attempting to steal.

In the top of the second inning, Hargesheimer fell apart on the mound. Sierra doubled and Harrah was hit by a pitch. McDowell doubled to score Sierra, and Scott Fletcher singled Harrah and McDowell home. Hargesheimer was replaced by Steve Farr after walking Incaviglia. Ward’s single scored Fletcher to make the score 5-1. An ineffective Hargesheimer gave up five earned runs on five hits and two walks in 1⅔ innings pitched. He would never appear in another major-league game.

Loynd struck out White to end the third inning, and, according to White, the rookie pitcher began yelling at him in what he thought was an attempt to show him up.2 Loynd’s supposed behavior would come back to haunt him later in the game.

The Rangers scored two more runs in the fourth inning with four singles off Farr, making the score 7-1. They appeared to have the game under control, and spectators began heading for the exits after the inning.3

But in the bottom of the fifth, Loynd gave up a double to Brett and walked Orta. Facing Loynd for the third time in the game, White slammed a double that scored both runners and cut the Rangers’ lead to 7-3.

In the top of the sixth inning, the Royals again skirmished with the umpires. Replacing Farr, Royals pitcher Dennis Leonard faced Pete O’Brien as the first batter. On a 2-and-1 count, Leonard threw a pitch at which O’Brien began to swing and stopped. Home-plate umpire Rick Reed asked third-base umpire Dale Ford to make the call, and Ford signaled that O’Brien had held up his swing, calling it a ball. Arguments ensued with the umpires involving Leonard, Brett, and White, with Brett being ejected from the game by Ford.4 After the imbroglio, O’Brien doubled and went to third on Incaviglia’s grounder, but he was caught off third on Tom Paciorek’s groundball and Paciorek was out trying to go to second.

After the game, Ford said, “(Brett) didn’t like the no-swing call. He said three or four times it was a bad call. Then he called me a (obscenity). If my mother calls me that, she has to go.”

The incident with the umpires seemed to light a fire under the Royals in the bottom of the sixth. Aided by a couple of Rangers miscues, Kansas City scored five runs and took an 8-7 lead.

Rangers reliever Jeff Russell replaced Loynd and walked Buddy Biancalana with one out. Smith doubled, sending Biancalana to third base. When Wilson hit a blooper to shallow center field, Biancalana waited to see if the ball would drop before running home. But Smith went to third immediately, and the Royals had two runners standing on the base. But when the ball dropped for a single, Biancalana scored without a throw from center fielder McDowell.5

Greg Pryor, who had replaced Brett, reached on an error by second baseman Harrah, who mishandled a flip from shortstop Fletcher on a groundball. Smith scored. After Orta hit into a force play, White came through again with a three-run home run into the left-field seats to give the Royals the lead, 8-7.

The Royals’ lead didn’t last long: Sierra tripled and Don Slaught singled to tie the score in the top of the seventh inning. The Royals got two runners on in the bottom of the inning but failed to push across a run.

Neither team scored again until the bottom of the 11th inning. White’s heroics emerged once more as he led off with a dramatic walk-off home run off Dale Mohorcic to give the Royals a 9-8 victory.

Altogether, White had four hits in the game and drove in a career-high seven runs, tying a Royals record for the most RBIs in a game held by Brett in 1983, Willie Aikens (1982), and Jerry Grote (1981).6 Smith, Wilson, and Brett each had two hits as part of the Royals’ total of 14.

White commented after the game, “After (Loynd) struck me out he tried to show me up. It perked me up; it got my adrenaline going.” He added, “It was a night where I thought I was concentrating, but I probably wasn’t until then. After that I wanted to be at the plate all of the time.”7

Ferraro said, “Their pitcher was making noises on the mound. He hollered something at White after he struck him out. White stared at him. That was the first time I’d seen White stare at a pitcher. Frank usually doesn’t do that.”8

Royals catcher Sundberg blamed Loynd for White’s reaction. “I couldn’t believe it,” he said of Loynd’s antics. “In my 13 years I’ve never seen anything like it. Not even for a veteran, let alone a college kid.”9

Royals reliever Dan Quisenberry pitched two perfect innings to finish the game and claimed his first victory of the season. Mohorcic was charged with the loss.

Ferraro summed up the Royals’ effort: “I’ve seen some wild games, but this has to be the wildest. Nothing amazes me what they do anymore. It shows everyone that even though we’re 12 games out, no one’s going to lie down.”10

Despite Ferraro’s optimistic outlook, the Royals finished the season in third place in the AL West, six games under .500 and 16 games behind the Angels.

Dick Howser underwent a second surgery on December 5 for additional cancer treatment known as immunostimulation.11 He died on June 17, 1987.

White tied his career high for home runs (22) and set a career high for RBIs (84). He collected an American League record seventh Gold Glove for second basemen. He was named the Royals Player of the Year by the Kansas City chapter of the Baseball Writers Association of America.12