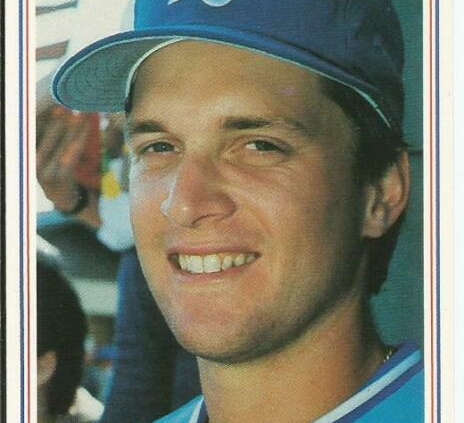 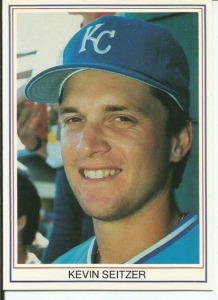 The Kansas City Royals were undergoing a transition in 1986-87. The Royals had won the World Series in 1985, but were slow getting out of the gate in 1986. Shortly after the All-Star break, manager Dick Howser was diagnosed with a brain tumor. He stepped down as manager to undergo treatment, and Mike Ferraro finished out the lackluster season as Royals manager. Howser tried to come back in the spring of 1987, but soon discovered that he was too weak to put up with the strains of managing a major-league ballclub, and was replaced by Billy Gardner. Howser died in June of 1987.

The other big transition that occurred during this time was the shifting of future Hall of Famer George Brett from third base to first base with Kevin Seitzer taking over for Brett at the hot corner. Seitzer was drafted by the Royals in the 11th round of the 1983 draft out of Eastern Illinois University, where he hit over .400 all three years he was there.1 Since being drafted, Seitzer had done nothing but hit in the minor leagues, posting on-base percentages of .453, .432, .456, and .442 in his first four years. This earned him a call-up to the big club in September of 1986. Seitzer didn’t stop hitting when he reached the majors, posting a .323 average and .440 on-base percentage in 28 September games.

Seitzer opened the 1987 season as the starting first baseman, with Steve Balboni moving to designated hitter and Brett still entrenched at third. Third base was Seitzer’s natural position, however, and by May, Seitzer was playing third on a full-time basis with Brett moving to first. Seitzer started the year red-hot, hitting .382 in the month of April. He continued to post solid numbers as the season wore on, and was hitting .313 when the Royals took the field on Sunday, August 2, to close out a three-game series with the Boston Red Sox.

The day was brutally hot with the temperature at game time a torrid 103 degrees. The Royals Stadium artificial turf made things that much hotter, and a thermometer placed near the third-base coach’s box registered 160 degrees. A crowd of 29,154 hardy souls braved the heat to watch Mark Gubicza face off against Boston’s Bob Stanley.2

Seitzer was hitting second for the Royals, and in the bottom of the first inning with one out, he beat out an infield single to shortstop. George Brett followed with a ground-rule double, and a grounder by Danny Tartabull drove in Seitzer with the game’s first run.

The Red Sox scored two runs in the top of the second and led 2-1 when Seitzer came up to lead off the third inning. Seitzer belted a home run to tie the game at 2-2.

The score was still deadlocked when the Royals came to bat in the bottom of the fourth. Ross Jones led off with a single and, after a sacrifice bunt by catcher Larry Owen, Lonnie Smith singled, advancing Jones to third. Seitzer then singled to right, scoring Jones. After a fly out by Brett advanced Smith to third, Danny Tartabull rolled an infield single to score Smith and give the Royals a 4-2 lead. That was all for Bob Stanley as Red Sox manager John McNamara brought in Steve Crawford to get the final out in the fourth and keep Boston in the game.

Boston scored a run in the top of the fifth inning on a couple of singles and a sacrifice fly by Marc Sullivan to cut the Royals lead to 4-3. Crawford issued a leadoff walk to Bill Pecota to open the fifth, and Steve Balboni followed with a double to score Pecota. Ross Jones grounded to third baseman Wade Boggs, who looked up to see Balboni lumbering toward him. Boggs easily tagged Balboni for the first out of the inning. After a fly out by Owen, Lonnie Smith banged out a single to bring Seitzer up with two on and two out. Seitzer launched a three-run homer for his fourth hit of the game and his third, fourth, and fifth RBIs. The Royals now led 8-3.

Gubicza retired the Red Sox in order in the sixth and seventh innings and the top of the order was due up for the Royals in the seventh with the Royals still up 8-3 and reliever Tom Bolton on the mound for the Red Sox. Smith flied to right, and Seitzer grounded a single to center for his fifth hit of the game. Brett grounded out and, following a walk to Danny Tartabull, Bo Jackson grounded out to end the inning.

Gubicza again held the Red Sox scoreless in the eighth inning. With the Royals up by five runs and Seitzer due up sixth in the Royals half of the eighth, Seitzer would need some help from his teammates if he was going to get his chance at a sixth hit. Calvin Schiraldi replaced Bolton on the hill for the Red Sox to face Bill Pecota, Steve Balboni, and Ross Jones. Pecota led off with a single, stole second, and scored when Balboni lined a single to left. Jones and Larry Owen both struck out, and that left things up to Lonnie Smith to get on so Seitzer could come to the plate. Smith doubled to left, putting runners on second and third to bring Seitzer to the plate for his sixth at-bat of the game.

Only the specter of George Brett looming in the on-deck circle likely kept the Red Sox from intentionally walking such a hot hitter. Seitzer lifted a high fly to deep right that Mike Greenwell appeared to be moving under to catch. The sun was bright, and Greenwell lost sight of the ball. “I lost it in the sun.,” Greenwell said. “At any other angle, I would have had it. I saw the ball go right into the sun. I didn’t see the ball again until it was like a foot from the ground. You can’t fight nature. (The sun) was just too bright.”3 The ball bounced off the artificial turf and into the right field stands for a ground-rule double. Seitzer had his sixth hit of the game and his sixth and seventh RBIs. Brett followed with a homer, and the Royals romped to a 13-5 victory.4

After the game, Seitzer was modest about his accomplishment. “I was just trying to do my job,” he said. “I’m not an RBI man. I’m not a home-run man. I’m what you call a set-up man. I hit in the second hole and allow guys to get into scoring position. I just kind of go in there with a job in mind every time and to accomplish whatever I’m asked to do. If nobody is on, I’ll try and start it.”5

Kevin Seitzer finished the 1987 season with a .323 average and 207 hits, a record that in most years would easily win the Rookie of the Year award. Unfortunately for Seitzer, Oakland first baseman Mark McGwire set a rookie record with 49 home runs and garnered all the first-place votes with Seitzer finishing second in the voting. After Seitzer’s playing career, he was able to teach his hitting skills to others, becoming a respected hitting coach, and teaming up with former Royal Mike Macfarlane to open the Mac N Seitz Baseball and Softball Academy in Kansas City.6

4 “Kevin Seitzer Picks Up His Sixth Hit of the Game,” youtube.com/watch?v=v0Guz52OsQI.