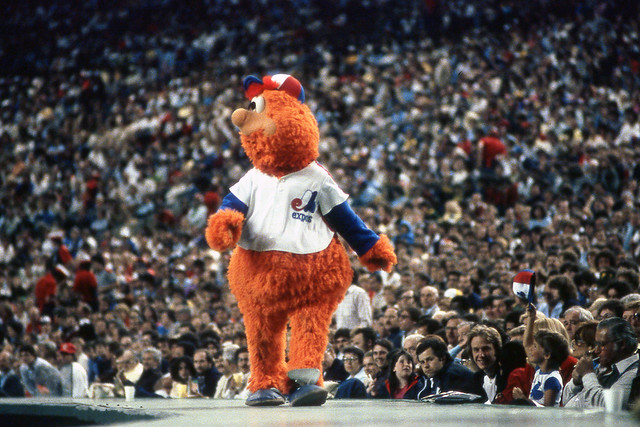 There are many things that can be said about this game. “The fans didn’t get their money’s worth” is not one of them. Any stalwart fan among the 21,742 in attendance at Olympic Stadium who stayed for the entire game saw one for the record books.

The Montreal Expos (69-57) were hoping to gain on the New York Mets (also 69-57) and the Chicago Cubs (71-56) in the close NL East race since both had lost day games before this one started. The visiting Los Angeles Dodgers (59-67) were fifth in the NL West, 13 games back of their rival San Francisco Giants.

The game started in the usual way: Pascual Pérez (7-12, 3.68 ERA) took the mound for the top of the first for Montreal. He faced the minimum on nine pitches. The Dodgers’ reigning Cy Young Award winner, Orel Hershiser, had a little more trouble with the Expos: He started by walking Dave Martinez on four pitches. Martinez made it to third before Tim Raines struck out to end the inning, but he was the only baserunner.

That inning set the pattern for most of the game: Either there were no baserunners at all in an inning, or the pitcher would allow one and then slam the door.

The first time there were two baserunners was the bottom of the sixth. Hershiser started the inning by walking Martinez again, but he was stuck there for two more batters on a groundout and a foul pop to first. Raines singled on the next pitch allowing Martinez to make it to third, but he was left there when Tim Wallach struck out looking.

The Dodgers started the seventh with two singles. The Expos thought they had turned a triple play in the next at-bat and headed for the dugout, but the umpire ruled that Willie Randolph beat the throw to second,1 so it was only a double play followed by a fly out. Hershiser got three groundouts in the bottom of the seventh.

Mike Scioscia singled to open the eighth inning, then was pulled for a pinch-runner when he strained his hamstring. (He said the game went on so long it was healed by the 17th.2) After Jeff Hamilton popped out to the catcher, José González singled then advanced to second on a throwing error by center fielder Martinez. (He hit the cutoff man — literally. Spike Owen was running toward third, and Martinez’s throw hit him in the rear.3) With runners on second and third with only one out, Dodgers manager Tommy Lasorda decided to pinch hit for Hershiser even though he’d thrown only 77 pitches. But pinch hitter Mike Sharperson struck out and Alfredo Griffin lined out to second to kill the rally. The Expos opened their half of the eighth with a single by Wallace Johnson off Jay Howell, but Johnson only made it to second. Howell needed only six pitches for the whole inning.

Each team had three batters in the ninth: Each had a single which was erased on a groundball double play. At the end of regulation there had been 16 baserunners between the two teams, four of whom had made it as far as third base but no further.

The Dodgers threatened again in the top of the 10th: A baserunner made it to third against the Expos’ Tim Burke in his second inning of work. But Burke got Dave Anderson to ground out and keep the score tied. Nothing for the Expos in the bottom of the frame although they made Alejandro Peña throw 19 pitches to get the three outs.

Bryn Smith, the third Expos pitcher (making his first relief appearance since 1983), started the 11th with a strikeout. With Randolph batting, Lasorda complained to umpire Bob Davidson about the Expos mascot, Youppi, who was “napping” on the roof of the visitors’ dugout. Youppi had changed into his nightgown and nightcap and brought his pillow along as well. Davidson ejected Youppi, who like any ejected player, took advantage of the situation and tossed his nightcap and pillow. Unlike ejected players, Youppi was allowed to stay in the ballpark as long as he stayed away from the Dodgers’ dugout.4

Undaunted by the kerfuffle, Smith pitched to Randolph. Randolph fouled off the first pitch: Expos catcher Mike Fitzgerald had a chance at it but lost the ball to a fan — who turned out to be Expos President Claude Bouchu.5 After Randolph grounded out, Lenny Harris and Eddie Murray singled but Mickey Hatcher struck out on three pitches to waste the baserunners.

From the bottom of the 11th through the top of the 16th no runner reached third base, although three made it as far as second. Expos manager Buck Rodgers admitted he lost track after the 15th inning.6 Peña pitched four innings for the Dodgers and collected his first hit while pitching as a reliever. He had no other plate appearance for the year so he finished 1989 batting 1.000.

The game looked as if it might be over in the bottom of the 16th when the Expos loaded the bases with no outs. Wallach hit a fly to center but too shallow to allow Larry Walker to score from third. Fitzgerald’s fly was deeper, and Walker avoided Dempsey’s tag at home. The Expos jumped out of the dugout to celebrate, but Dempsey threw the ball back to third in case Walker had left early. On the Dodgers’ appeal to umpire Davidson, Walker was indeed held to have left early, so he was out and the inning was over with the score still a pristine 0-0.

And the top of the 19th (in which the Dodgers did get a runner to third).

And bottom of the 19th, the 20th, and the top of the 21st (in which there were exactly zero baserunners).

As the midnight hour passed the press corps asked Expos publicity director Richard Griffith if they would raise the roof for sunrise. “Only if we get a favorable weather report,” he responded.7

The Expos threatened again in the bottom of the 21st, in front of an ever-diminishing crowd. With two out John Wetteland, the Dodgers fifth and final pitcher (and usual starter), intentionally walked Raines to pitch to Wallach. He didn’t have to pitch to him: Dempsey picked Raines off first to end the inning.

The first and only score came in the top of the 22nd: Dempsey opened the inning by homering off Dennis Martínez (another starter being used in relief), although Martínez allowed no other hits. Dempsey had started the game with a .168 BA, lower than starting pitcher Hershiser. This was only his second homer of 1989.

In the bottom of the frame, Wetteland continued pitching for the Dodgers. Wallach flied out; Fitzgerald struck out. Down to the last out, Rex Hudler singled to center. But that was all for the Expos: With Owen at the plate Hudler was caught stealing second for the final out.

After 6 hours and 14 minutes, at nearly 2 A.M., the game was finally over. The Dodgers could catch their long-delayed charter flight back to Los Angeles with a 1-1 record in 22-inning games (they had lost a 22-inning game to the Astros on June 3). They arrived home in time to get caught in rush-hour traffic.8

The Expos for their part had to head home, pack, and be ready for their 3 P.M. flight to San Francisco — which took less time than the game.9 They also had to reset their rotation since they had used three starters in this game, and the fourth (Mark Langston) was warming up in the bullpen as the game ended. Apparently they figured out how to score while on the flight: they beat the Giants 12-2 in their first game in SF.

Luckily, both teams and the umpiring crew were off on August 24.

Some records and other notes from the game:

The Dodgers went 22 innings without drawing a walk, breaking a record set on July 17, 1914, by the Giants against Pittsburgh’s Babe Adams, who pitched 21 innings without allowing a base on balls.10

This was the second-longest shutout game at that time, second to the 24-inning Astros-Mets game on April 15, 1968,11  although this game was eight minutes longer.

Dodger Lenny Harris played the outfield for the first time since high school and went 5-for-9. His five hits were more than the Expos outfield combined.12

Seven Dodgers and seven Expos played the entire 22 innings. They included Alfredo Griffin, the Dodgers leadoff hitter, who went 0-for-9, lowering his average from .269 to .263. It was never above .263 for the rest of the season. Larry Walker, the Expos right fielder, debuted the previous week: This was only his seventh major-league game.

12  Apparently, Lasorda liked the results of the experiment: Harris started playing the outfield regularly through the rest of his career.