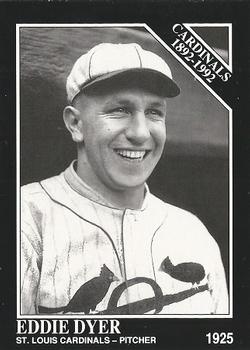 The Cardinals entered the 2 P.M. doubleheader with the Brooklyn Robins far off the pace in the National League race. Winners of only 50 of their 118 games to this point in the season, the disappointing club was sixth in the National League, ahead of only the Philadelphia Phillies and Boston Braves. The third-place Robins, on the other hand, were hoping to stay in the thick of the pennant race. They were 67-52, seven games behind the first-place New York Giants with just over one month to go.

The Cardinals’ offense was led by their hitting sensation, second baseman Rogers Hornsby. Entering the doubleheader, Hornsby was leading the National League in hitting at .423, was second in runs scored with 92 and third in home runs with 19. The Cardinals’ other hitting star, first baseman Jim Bottomley, led the team in RBIs with 78. After taking the first game from the Robins in dramatic fashion, 7-6, on a home run by Hornsby in the bottom of the ninth, St. Louis sent 24-year-old Eddie Dyer to the mound in the second contest. Dyer entered the game with a record of 5-10 and an ERA of 5.28, having pitching very poorly in his five previous games (32 hits and 20 earned runs over 18⅔ innings). He was opposed by Robins rookie starter Jim Roberts, 0-2 with an ERA of 7.08. It figured to be a high-scoring affair — and it was, at least on one side of the line score.

In a quick 1-hour and 43-minute effort, Dyer had his best stuff as he walked two and scattered seven singles to pick up his sixth win and his only shutout of the season as the Cardinals smoked the Robins, 17-0. Still officially a rookie after only short stints with the Cardinals in 1922 and 1923, Dyer was in command throughout the game and was aided by four Cardinals double plays.

Roberts did not fare nearly as well. The Cardinals sent 49 batters to the plate, getting 25 hits and two walks off Roberts and reliever Tiny Osborne. Hornsby started the scoring with a first-inning triple and came home on Bottomley’s single.1 After picking up single tallies in each of the first two innings, the Cardinals rocked Brooklyn for seven more in the fourth, aided by a critical error by shortstop Johnny Mitchell. The outburst chased Roberts, who would not win a game in his short major-league career. Against Osborne the Cardinals added a single run in the fifth, two in the seventh, and five in the bottom of the eighth to close the scoring. Osborne took one for the team, getting tagged with 8 runs and 15 hits in 4⅓ innings of work.

Reserve catcher Verne Clemons, giving a breather to first-stringer Mike Gonzalez, who was behind the plate in the opener, led the Cardinals offense with a double and four singles in five plate appearances. Bottomley and reserve shortstop Specs Toporcer each had four hits. Hornsby, the hero of the first game, and left fielder Ray Blades each contributed three hits. Dyer, not a bad hitter himself, chipped in at the plate with a double, a walk, a sacrifice, and three RBIs in his five plate appearances, raising his batting average for the season to .254. The whitewash ranked as the third most lopsided shutout in National League history and the fourth most lopsided in major-league history to that point.2

The Cardinals were playing with a patchwork crew in this second game of the doubleheader. In the first game starting pitcher Leo Dickerman was hit by a pitch and suffered a broken arm, and starting shortstop Jimmy Cooney dislocated his thumb on a play at third base. The injuries continued in the nightcap as Wattie Holm, an outfielder who was filling in at third base, broke a bone in his right foot while fielding a groundball.3

The 17-0 shutout ranked among Dyer’s most memorable mound performances. While pitching for Rice Institute (later Rice University) in 1921, Dyer threw a no-hitter, besting future White Sox Hall of Famer Ted Lyons of Baylor.4 In his first major-league start with the Cardinals, Dyer shut out the Chicago Cubs 3-0 on September 9, 1923, scattering eight hits.5 The lopsided victory over Brooklyn was Dyer’s only other major-league shutout.

In 1928 Dyer began a new career as a manager in the Cardinals’ budding farm system. In 1946 he succeeded Billy Southworth as manager of the Cardinals and the team won the World Series against the Boston Red Sox that year. He managed the team through the 1950 season.

Unfazed after their humiliating defeat, the Robins immediately went on a 15-game winning streak, which placed them virtually even with the first-place Giants on September 6 as they approached the final three weeks of the regular season. However, the Giants closed the season with wins in 11 of their last 17 games to capture the NL pennant by 1½ games. The Cardinals, meanwhile, finished their season with 25 of 32 games on the road and limped in with a disappointing record of 65-89 (.422), 28½ games behind the first-place Giants.