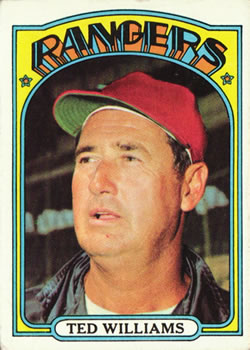 As Red Sox owner Tom Yawkey was sometimes wont to do, the Boston Red Sox announced that all proceeds from the Friday night, August 25 game against the visiting Texas Rangers would go to the Jimmy Fund, to aid in the fight against cancer in children. The Jimmy Fund was a favored cause of Ted Williams, dating back to 1947, and the official charity of the Red Sox since they inherited the mantle after the Boston Braves left town in 1953. There was a hitting contest scheduled before the game with older players such as Dom DiMaggio, Walt Dropo, Ted Lepcio, Frank Malzone, and Johnny Pesky.

Ted Williams was in town as manager of the Texas Rangers. It was far from the first time he’d visited Fenway with another team; he’d managed the Washington Senators in 1969, 1970, and 1971. The Rangers had been to Fenway in mid-June, but this time there was the Jimmy Fund component. And a hitting contest.

Ben Bradlee Jr. writes that Tom Yawkey had paid a visit to Ted before the contest.1 It wasn’t a total surprise that Ted took up a bat; he’d told Clif Keane of the Boston Globe the day before that he’d be taking at least half a dozen swings.2

Williams had been out of the game for a dozen years and was just five days shy of turning 54 years old. The old slugger said, “I may have a heart attack. I haven’t swung all year, so it may be tough.” Keane suspected he might have done a little hitting the day before, when the Rangers were in Milwaukee.

The 6:30 P.M. contest before the regularly scheduled game was to feature some 10 radio personalities and former Red Sox players.

The others all took their cuts, but around 7:15 the crowd started chanting, “We want Ted!”

It made it appear that he hadn’t been scheduled to be in the competition but was drafted by popular acclaim. Williams was described by the Globe‘s Keane as “obese” and by the Boston Herald‘s Fred Ciampa as “portly.” Keane said Ted “dragged his bat, as ever, shaking his head and pointing out to [pitcher] Lee Stange of the Red Sox to ‘bring it.’” 3

Williams didn’t just grab any old bat, apparently. Bill Ziegler handed him one of Tom Grieve‘s bats, a W183 Louisville Slugger, the same model Williams had used as a player. He was wearing number 9, but his jersey bore the name “Williams” on the back; it was a Rangers jersey. The Red Sox, even more than 40 years later, do not wear their names on their uniforms at home.

Texas Rangers catcher-left fielder Dick Billings said, “It was the most electrifying thing I’ve even seen in my life. He hit line drive after line drive. He hit them everywhere. He hit them off the wall. He hit a home run that was just foul [to right field]. Everything was a shot. Guys in the dugout were just looking at each other. Staring. How old was he? You would have thought he was 22. I never have seen a batting practice exhibition like that from anyone of any age.”4

Though Williams struck the ball well, Billings may have been guilty of a bit of hyperbole. The one he said was off the wall was actually off the front wall of the Rangers bullpen, hitting it on one bounce. The Boston Herald did write that he hit one “clearing the right-field fence.”5 The Los Angeles Times wrote that Number 9’s timing was understandably off: “He fouled off several pitches, but also hit some solid shots, including one to the base of the 380-foot sign in right field. Ted also pulled one down the right-field line which appeared foul by inches.”6

So maybe he didn’t actually hit a home run. Everyone felt good. And regarding the ball that went near the Pesky Pole, it was ruled a home run. “[T]he ‘official scorer’ ruled that the drive hit the foul pole, so the Jimmy Fund, Ted’s pet charity, was enriched by another $250 donation from Yawkey for the ‘homer.’”7 Ted Lepcio did hit a homer, into the netting atop the left-field wall. Walt Dropo hit one out, too. (It was noted that Lepcio had been working out at Fenway for two weeks.)

Keane concluded, “Layoffs don’t mean a thing if you still have that swing.” Tom Grieve of the Rangers had a memory paralleling that of Billings. “The players were just stunned.”8

In the game that followed, Luis Tiant threw a four-hitter and the Red Sox won, 4-0. It was his fourth start in a row that resulted in a complete-game win. He’d allowed a total of 16 hits in the four games. His next two starts were shutouts as well.

Ted’s hitting well after a layoff was reminiscent of the show he put on back in 1953 for a nearly empty ballpark and not the 33,551 present in 1972. He’d just come back from serving in the Korean War, including 39 combat missions, forced to crash-land his jet once and barely limping back with a badly damaged plane another time. He hadn’t held a bat, or been on a ballfield, for more than a year. Cambridge Chronicle reporter George Sullivan recalled that Williams took a few swings at Paul Schreiber‘s pitches … and then hit nine balls in a row out of the park. “It was one of the greatest things I ever saw. I always said it was one of the greatest things I ever saw, how many balls he hit out of the ballpark. My nose was up almost to that batting cage. I noticed during the end of it that there was blood streaming down Ted’s hands. Just superficial, from his hands not being calloused from hitting a baseball.”9