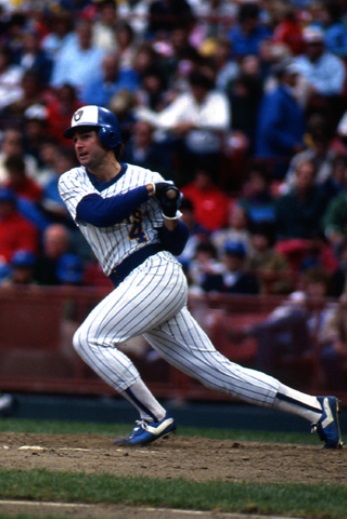 When an injury (or a sullen attitude) forced Robin Yount out of the lineup for the start of the 1978 season, the Brewers felt so strongly about the potential of Paul Molitor that they handed the second-year pro, who had never been out of Class A baseball, the role of starting big-league shortstop.1 To Molitor, this was because his aggressive style of play fit with the vision of general manager Harry Dalton.2 Still, despite what productivity he achieved in his first nine years in the big leagues including helping the Brewers get to the World Series, there was a nagging belief that Molitor, thanks to a series of nagging injuries and a not-so-private drug problem, had not lived up to the potential that he showed as a rookie. That all changed in the late summer of 1987.

At that point, Molitor embarked on the kind of hot streak that few in baseball history had rivaled. It began harmlessly enough with a 1-for-4 night against the California Angels at County Stadium. After that, however, Molitor kicked into overdrive and recorded at least one hit for the next 38 games. To be sure, the pressure was unbelievable for both Molitor and those around him. However, every day he continued to check in. On August 22 the Brewers DH extended the streak to 36 games against the Kansas City Royals. The entertainment department at County Stadium took to playing the “The Beat Goes On” by Sonny and Cher after every hit. After Molitor posted a hit in his 38th straight game, with a single off the Royals’ Charlie Leibrandt, he was fourth on the all-time American League consecutive games hit list behind Ty Cobb (40) and Joe DiMaggio (56).

Despite Molitor’s run at history, the crowds that cane to see him still fluctuated. August 25 was no different. That night the Cleveland Indians came to County Stadium and only 15,580 were there to see if Molitor could ring the bell. As for why this was, perhaps the weather had something to do with it. From the beginning, the night was dark and gray and rain dotted the forecast. So much so that there was speculation that the game could be called after five innings.

On the field it did not look as if Molitor would get any help either. In the bottom of the first, the man they called “The Igniter” lined out to right field to lead off the inning as the Brewers went quietly in a scoreless first against Tribe starter Ken Schrom. Then in the second inning, with Milwaukee trailing 1-0, a Cleveland error opened the floodgates to a five-run inning. In that rally, Molitor walked. Then, in the fourth, with the Brewers leading 5-1, Molitor grounded out to second base against veteran Jamie Easterly. This start guaranteed that by the time he came up in the sixth, with the Brewers leading 8-4, the tension was palpable. Luckily for fans and teammates alike, Molitor cut the tension on the first pitch from Indians reliever Don Gordon. “In the two or three times that I’ve faced him he’s come in with a slider and I thought he might do it again,” said Molitor.3 This time, however, Gordon attempted to bust Molitor inside with a fastball. This fooled him but the pitch got enough of the plate that Molitor was able to hit a one-hop smash between first and second that made its way into right field.

At that moment, the 15,580 in attendance seemed like double that. “Celebration” by Kool and the Gang reverberated through the cheers and the party was on. You would not know it by looking at Molitor, however. As he stood at first, his face was calm, almost devoid of emotion. After the game, which turned out to be a tense 10-9 Brewers victory after three Indians home runs in the eighth inning off Brewers starter and winner Juan Nieves, Molitor was much the same way. He told sportswriters that he did not know if he was going to get a hit despite good numbers against Cleveland. As for continuing the streak, Molitor acknowledged that he looked at the papers and did think ahead. “Forty-four [straight games with a hit, which would have tied him for second all-time with Pete Rose] is a very nice number … but I can only cause problems looking too far ahead.”4 Of course, the future Hall of Famer never got to find out if that was the case. The next day, Molitor went 0-for-4 against John Farrell of the Indians and he was left in the on-deck circle when Rick Manning drove in the winning run in the 10th inning of a 1-0 Brewer win.

1 According to Molitor, Yount was out due to injury. However, Daniel Okrent wrote that Yount sat out because he was unhappy with the Brewers fawning over Molitor. See Josh Lewin, You Never Forget Your First (Dulles, Virginia: Potomac Books, 2005), and Daniel Okrent, Nine Innings: The Anatomy of a Baseball Game (New York: Houghton Mifflin Harcourt, 1985).