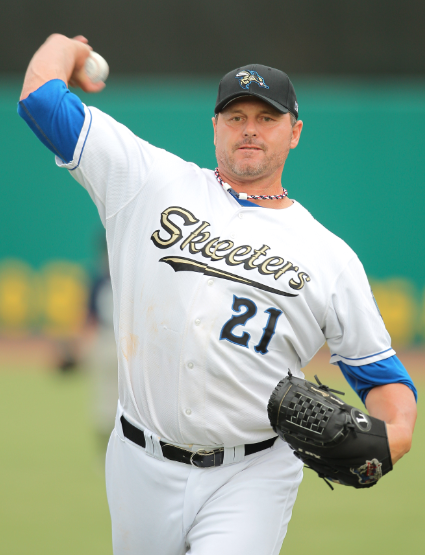 The major leagues are often referred to as “The Show” because they represent the highest level of competition in baseball. The games of the teams’ minor-league affiliates also provide their share of entertainment, showcasing rising stars as well as the occasional major leaguer on a rehabilitation assignment. In addition, there exist independent minor-league teams that, in many people’s perception, consist largely of what are derisively called “has beens” and “never weres,” though the quality of play is often still above average. On August 25, 2012, the unaffiliated Sugar Land (Texas) Skeeters brought “The Show” to town when Roger Clemens – he of the 354 victories and seven Cy Young Awards – pitched for the team at its ballpark, Constellation Field.

Sugar Land, a suburb southwest of Houston, is where Clemens first lived upon moving to Texas when he was 15. The city’s franchise was in the midst of its inaugural season in the Atlantic League of Professional Baseball and was already leading the league in attendance when it received a national publicity boost from the announcement that Clemens would come out of retirement at the age of 50 to pitch one game for the team. The effect of the news was immediate: Box-seat tickets that cost $12 were being sold on internet outlets for $200, more than 100 press credentials were issued, and ESPN announced that it would broadcast the game live on ESPN Classic.

The foremost question on everyone’s minds concerned Clemens’ motivation to play the game. Reports stated that former major leaguer Gary Gaetti, who was the Skeeters’ manager and had been a coach with the Houston Astros during Clemens’ time with that franchise, had talked him into it. Clemens, a Houston resident, and his agent claimed that he merely wanted to have fun and to do something positive for the community. However, he had been acquitted of lying to Congress only two months earlier and many people still considered him a PED-tainted star. Cynics suspected that he was planning a late-season major-league comeback to push back his eligibility for the Hall of Fame another five years. Such critics thought he was engaged in a publicity stunt and was using the Skeeters to work himself back into playing shape.

Adding fuel to the speculation that Clemens was planning a comeback was the fact that scouts from the Astros and the Kansas City Royals were among the crowd at Constellation Field, where 7,724 spectators overflowed a venue that had a normal capacity of 7,500.

Clemens wore the number 21 – the same number he had worn as a young star with the Boston Red Sox – as he took the mound for the Skeeters against the Bridgeport (Connecticut) Bluefish. In his final major-league game – an October 7, 2007, start for the New York Yankees against the Cleveland Indians in the American League Division Series – he had struck out the final batter he had faced, Indians catcher Victor Martinez. On this night, almost five full years later, he picked up where he had left off by striking out the first Bluefish batter, former major leaguer Joey Gathright.

Over the course of 3? innings, Clemens threw 37 pitches, allowed one hit and no walks, and struck out two batters. James Simmons was the sole Bluefish player to get a hit off Clemens when he singled with two outs in the second inning. Simmons, a Texas native who had advanced as far as Triple-A but never to the majors, was thrilled and said of his hit, “I definitely will remember that.”1

The Skeeters scored in the bottom of the second and won the game by a final score of 1-0, but Clemens received no decision since he had not pitched the minimum five innings required of a starter. He had retired one batter in the fourth when he exited the game to a standing ovation. Clemens indicated that he might have pitched longer but for the fact that he was feeling sore. He said, “I probably overextended myself a little bit.”2

None of the fans present felt slighted by the relatively brief performance and there was no negativity in the air that night. “It was awesome,” raved one fan, while another acknowledged, “We wouldn’t have been here tonight if it wasn’t for Roger,” and a third declared, “We support him. We’re excited for him.”3 Even the Skeeters’ team president, Matt O’Brien, was caught up in moment and said, “The ovation he got when he tipped his cap when he came out of the game gave you goose bumps.”4

As for the evaluations of the scouts, the Kansas City Royals’ Ron Toenjes thought Clemens did all right. “The thing that I was impressed with is you have a 50-year-old man out there throwing 87-88 (mph) most of the night, and he’s got a real good splitter,” Toenjes said, but “His command wasn’t as good as it could have been.”5

Clemens continued to deflect all questions about the possibility of a major-league comeback after the game, but he did indicate that he might pitch for the Skeeters again. He did so two weeks later, on September 7, when he pitched 4? shutout innings against the Long Island (New York) Ducks, with his oldest son, Koby, as his batterymate. Though Clemens pitched no more after that, both his reputation and the Skeeters’ renown benefited from the two times that he brought “The Show” to Sugar Land.