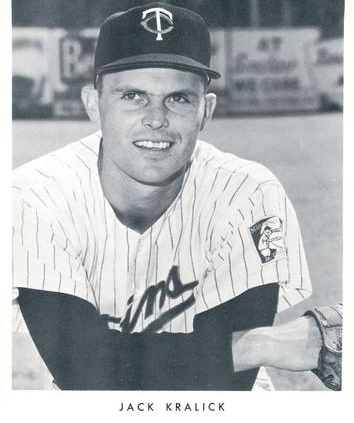 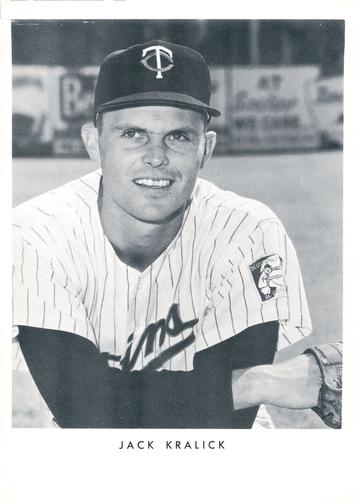 Although the 1961 Twins had finished their inaugural season in Minnesota with a won-lost record of 70-90, seventh in the American League, Twins owner Calvin Griffith was optimistic heading into the 1962 season. “We’re bound to show youthful improvement. Established American League performers Pascual, Ramos, Kralick, Battey, Killebrew and Allison haven’t reached their peaks yet. They’ll get better and we’ll rise to the first division with their improvement.”1

Jack Kralick had become a regular member of the Twins’ starting rotation in his sophomore season, posting a won-lost record of 13-11 and an earned-run average of 3.61 in 1961. He gave credit to pitching coach Eddie Lopat. “I learned a lot of pitching theory from Lopat.”2 Griffith rewarded Kralick’s progress with a salary increase to $12,500 before the start of spring training. “I went in expecting a battle for the money I wanted,” Kralick said. “He named the exact figure I had in mind and I was signed in three minutes.”3 Griffith said, “With better defense and better luck, he’s a potential 20-game winner.”4

A better infield defense appeared possible as the season began. Rookie Rich Rollins had won the third-base job, allowing Harmon Killebrew to move to left field. Another rookie, Bernie Allen, was now the starting second baseman. Improvement from shortstop Zoilo Versalles, in his second full season, could be expected. On April 2 the Twins obtained first basemen Vic Power and left-handed pitcher Dick Stigman from the Indians in exchange for starting pitcher Pedro Ramos. “Power should be a steadying influence on the kids,” said Twins manager Sam Mele. “They won’t have to worry about making perfect throws. If it’s within Power’s reach, he’ll come up with the ball.”5

After losing six of their first eight games, the Twins showed the improvement their owner had predicted. Minnesota won 34 of it next 53 games and was alone in first place on June 14, a half-game ahead of the defending World Series champion New York Yankees. Although the Twins dropped out of first place after losing the next three games at Kansas City, Minnesota was never more than two games out of first place until the Yankees swept a three-games series at Metropolitan Stadium on July 6, 7, and 8.

Kralick, however, was not having the success Griffith had predicted for him. Through the end of July, he had only one complete game in 24 starts. His record stood at 6-8, and his ERA had ballooned to 4.55. But from August 3 through 21, Kralick posted a 3-0 record in five starts, with two complete games and a 3.00 ERA. What was the reason for his turnaround? Kralick explained, “I’ve got my curve ball again. When my curve was hanging, I had to depend on my slider and they were long-balling me.”6

Kralick’s next start was at home against Kansas City on Sunday, August 26. After splitting the first two games of the weekend series, the Twins were tied for second with the Angels, four games behind the first-place Yankees. The Athletics, although ninth in the standings, were leading the American League in batting average.7 Kralick had last faced the A’s on August 8 in Kansas City. The A’s George Alusik hit a two-run homer off him in a seven inning, no-decision effort that the Twins lost in the bottom of the ninth, 4-3.

A crowd of 23,224 was settling into their seats as Kralick faced the first Kansas City batter, Bobby Del Greco. A 15 mile-per-hour wind blowing in from center held up Del Greco’s drive to left for the first out. “It would have been out of there except for the wind,” Kralick said after the game.8 The next two batters were retired on routine plays. In the bottom of the first, Power hit a one-out single and advanced to second on left fielder Manny Jimenez’s error. A’s starting pitcher Bill Fischer retired Rollins on a grounder to third and Killebrew on a called third strike to leave Power stranded at second base.

A similar pattern played out over the next three innings. Kralick retired the A’s in order in the second on a strikeout and two groundballs hit back to him. One-out singles by Battey and Allen were wasted when Versalles hit into a double play to end the Twins half of the inning. In the third the A’s again were retired in order on two groundouts and a strikeout. Kralick started the bottom of the third inning by reaching on an infield single. One out later Power’s single to left put runners on first and second, but neither advanced on Rollins’s fly out to center. Killebrew ended the inning by lining out to left.

In the top of the fourth, the A’s Ed Charles hit a drive to deep right-center. Bob Allison leaped at the fence to rob Charles of a home run.9 The next batter, Jerry Lumpe, grounded to Power, with Kralick covering first base, to end the inning, as the A’s again went down in order. With two outs in the bottom of the inning, Allen and Versalles singled but were left on base when Kralick grounded out to second.

The fifth and sixth innings saw each team retired in order. After the A’s half of the seventh, Kralick had retired all 21 batters he had faced. “I first noticed that I had a no-hitter going in the fifth inning,” Kralick said after the game. “I wasn’t even thinking about a perfect game until the seventh or eighth, when I couldn’t remember pitching from a stretch.”10

The Athletics’ Fischer had allowed seven singles over the first six innings but had given up no walks or runs. The Twins finally scored in the bottom of the seventh. After Allen’s leadoff single, Versalles bunted in front of the plate. Catcher Billy Bryan’s throw to second was late, and both runners were safe. Kralick’s sacrifice bunt moved both runners into scoring position, and Lenny Green’s fly out to center was deep enough to score Allen.

With the Twins now leading by a score of 1-0, Kralick ended the A’s half of the eighth inning by retiring Manny Jimenez on a groundball fielded by Power, who flipped to Kralick covering the base for the 24th out in a row. The Twins made three routine outs in the bottom of the eighth, and the score remained 1-0 heading into the final inning.

Kralick took the mound in the ninth three outs away from a perfect game. Wayne Causey, leading off for the A’s, grounded to Allen for the first out. Alusik, who had homered off Kralick  on August 8, pinch-hit for the A’s eighth-place hitter, Bryan. The first pitch to the right-handed batter was a strike on the inside corner. The next pitch was close to the plate, but inside for a ball. Another ball followed, a little farther inside. Alusik hit the next pitch on the ground past third base, but foul, to even the count at two balls and two strikes. The count went to 3-and-2 when Kralick’s next pitch was just outside at the letters. Alusik then fouled a fastball back to the screen. Another fastball missed high and outside, and the A’s had their first baserunner of the game.

Dick Howser ran for Alusik, and Billy Consolo batted for Fischer. After a called strike on a fastball, Kralick’s next pitch was high for a ball. Battey’s attempted pickoff throw to first got away from Power, but Howser couldn’t advance when Power quickly retrieved the ball. Consolo then hit a foul popup that was caught by Power near the Twins dugout. After a ball high and outside, Del Greco hit a popup in almost the exact place that Consolo had. When Power caught the ball, the Twins dugout emptied, as the team celebrated the first no-hit game at Metropolitan Stadium and the first by a Twins pitcher.

Kralick complimented his batterymate after the game: “Battey caught a whale of a game. He realized in the first inning that my curve wasn’t breaking well, so he called for a lot of sliders and fastballs with an occasional changeup.” Commenting on his ninth-inning battle with Alusik, Kralick said, “I didn’t want to give him anything too good to hit. He hit one pretty good off me in Kansas City.”11 Asked whether he was disappointed about not pitching a perfect game, Kralick replied, “I suppose it’s a little nicer to have a perfect game, but it really makes no difference to me.”12

3 Tom Briere, “Kralick Fattens Up in Pocketbook and Weight Department.”

4 Tom Briere, “Kralick Fattens Up in Pocketbook and Weight Department.”