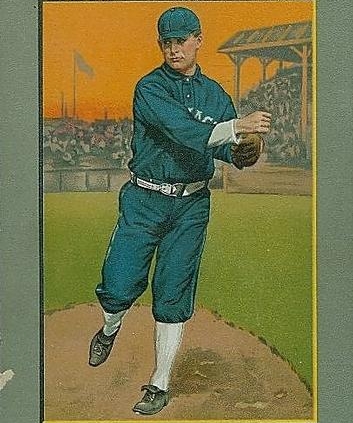 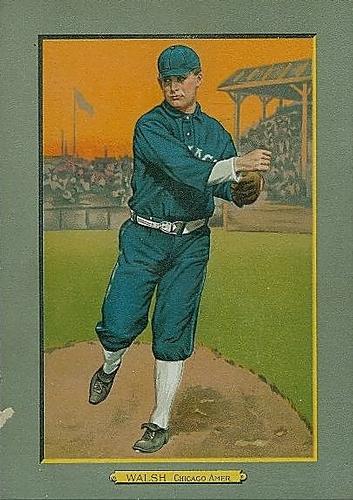 The Chicago White Sox right-hander Big Ed Walsh “slobber-balled along,” gushed Windy City sportswriter Henry David, “his flow of expectoration kept up round after round.”1 Beat reporter I.E. Sanborn of the Tribune was equally excited about the hurler’s wet ones, declaring that Walsh pitched “steadily, deliberately, and carefully with his spitball breaking wonderfully.”2

Big Ed had accomplished almost everything on the diamond when he took the mound at White Sox Park on the last Saturday afternoon in August 1911. [The ballpark was renamed Comiskey Park, after the team’s owner and founder, Charles Comiskey, for the 1913 season]. Sportswriter Fred J. Hewitt of the Inter Ocean declared that Walsh “is one of those carefully developed instruments that has been good for years and never loses class.”3 Few could disagree. Considered among the best and most durable hurlers of his generation, the 30-year-old Pennsylvanian boasted a 23-14 record, which pushed his career slate to 151-97 in parts of eight seasons. Three years earlier, Walsh had won 40 games (the last big leaguer to win that many) while completing 42 starts, tossing 11 shutouts, and logging a staggering 464 innings. Among baseball’s hardest throwers, he also led that majors that season with 269 strikeouts, and had twice punched out 15 batters in his career. He had three one-hitters to his credit, the last of which came just 12 days before his fateful start against the Red Sox, when he added the final notch in his eventual Hall of Fame résumé: his first and only no-hitter.

The “Base Ball Palace of the World” drew a robust crowd of 18,000 fans to the intersection of 35th Street and Shields Avenue on Chicago’s South Side for the first contest of a three-game series between the White Sox and Red Sox. Skipper Hugh Duffy’s fifth-place Pale Hose (59-59) were in the midst of a six-team, 21-game homestand that the former Boston Braves outfielder hoped would catapult his club into the first division. Pilot Patsy Donovan’s Red Sox (61-56) were in third place, trailing the front-running Philadelphia Athletics by 15½ games.

The Chicagoans wasted little time taking their whacks against 24-year-old southpaw Ray Collins, who, according to Hewitt, did not appear to be the intended starter.4 Smoky Joe Wood, the brilliant 21-year-old phenom who had won his 20th game in a start against the St. Louis Browns three days earlier, had been warming up in the bullpen. He was replaced shortly before the 3 P.M. start time by Collins (9-9), a trusty hurler in his own right, coming off a season in which he posted a minuscule 1.62 ERA. Perhaps Collins was not yet adequately loose and lathered up, because the White Sox “pounded him hard enough to have driven any one [sic] else to the woods,” opined Sanborn in the Tribune.5 Matty McIntyre led off with a triple and scored two batters later when former pitcher and two-time 20-game winner-turned-outfielder Nixey Callahan, playing in his first game in 10 days after a severe case of the boils,6 caught everyone off guard with a bunt. All infielders charged and first baseman Clyde Engle fielded the ball cleanly, but no one covered first, reported the Tribune.7 After Ping Bodie singled, Amby McConnell cracked a double to right field, scoring Callahan. While Bodie stopped on third, McConnell overran second, but when shortstop Steve Yerkes muffed the relay throw, Bodie scampered home for the third run, according to the Tribune.8 [No error was given on this play.

A serious outfield collision interrupted the game for several minutes in the bottom of the third and sent the crowd into a collective gasp. With two outs, Lee Tannehill smacked a fly to deep right-center field. As Tris Speaker caught the ball, Danish-born rookie Olaf Henriksen, making just his 12th start in right field, barreled into him. A “terrific impact jarred the ball out of Speaker’s hands,” reported the Tribune, as both players crashed violently to the ground.9 Second baseman Heinie Wagner sprinted to the orb and heaved it back to the infield and time was quickly called. As both Speaker and Henriksen lay momentarily unconscious, players from both benches rushed to them. The Boston Globe suggested that the impact was so vicious, it appeared to be fatal for Henriksen, who was carried off the field.10 Both players were replaced. [Henriksen was ultimately diagnosed with a wrenched shoulder and bruised stomach and missed a week; Speaker was back in action the next day.] The Red Sox were gifted an out when the next batter, Charlie Mullen, hit a screaming grounder off third baseman Larry Gardner’s arm into Yerkes’s mitt for an easier throw to first.11

The Pale Hose tacked on two more late-game runs. Bodie’s single plated Walsh in the seventh while Bruno Block’s single drove in Lee Tannehill, who had led off the eighth with a double. Collins went the distance, serving up 11 safeties.

Given a first-inning lead, Walsh toyed with the Red Sox all afternoon. The Donovans batted .275 as a team in 1911 (fourth best in the AL), but had no answer for Big Ed’s spitter, heater, and occasional curve. Walsh’s only blemish was a fourth-inning walk to Engle.

The outfield scoreboard tracked only the score, not hits, and word gradually spread around the ballpark that Walsh was working on a no-hitter. By the eighth inning, reported the Tribune, the White Sox faithful were “rooting for [Walsh] madly as if a world’s pennant depended on his right arm.”12 After Walsh fanned Gardner, Bill Carrigan “almost broke up the party,” opined Sanborn, when his grounder sped over the pitcher’s mound.13 In the defensive highlight of the game, shortstop Tannehill scooped up the ball behind second base and in one motion threw it to Mullen at first, beating the runner by “half an inch.”14 Mullen ended the frame by fielding Wagner’s weak roller.

As the crowd stood for every pitch, Walsh began the ninth by retiring Yerkes on a meek grounder, then punched out rookie Les Nunamaker, pinch-hitting for Collins. Joe Riggert, who had replaced Henriksen in right field, hit an infield chopper that “looked a hit for sure,” asserted Sanborn, perhaps with some dramatic exaggeration.15 McConnell fielded it easily on the hop and fired to Mullen to end the game in 1 hour and 50 minutes. Walsh “seemed to do it with so little effort,” declared scribe Henry David, noting the hurler needed only five pitches (three spitters) to retire the side in the ninth.16

As teammates rushed to congratulate Walsh for his no-hitter, hundreds of fans poured onto the field. The Inter Ocean reported that a throng of 1,000 fans greeted Walsh, then in street clothes, after the game.17

Walsh struck out eight and faced 28 batters en route to tossing the first no-hitter in Comiskey Park, and the fourth in franchise history. Nixey Callahan tossed the first, in 1902, at South Side Park, where the White Sox played from their inaugural season in 1901 through June 27, 1910. Frank Smith authored a pair, the first in Detroit’s Bennett Park in 1905 and the latter in South Side Park in 1908. By the time Comiskey Park closed after the 1990 season, five more Pale Hose hurlers had added their names to the list of no-hit-game hurlers: Joe Benz (1914), Vern Kennedy (1935), Bill Dietrich (1937), Bob Keegan (1957), and Joe Horlen (1967).

Walsh continued his dominant pitching through the end of the season despite playing for a mediocre fourth-place team (77-74). Big Ed finished with 27 wins (one fewer than Jack Coombs, who hurled for the 101-50, world-champion Athletics), completed more games (33) than anyone in baseball except Walter Johnson, and led all big-league pitchers with 56 appearances (37 starts), innings (368⅔), and strikeouts (255) to finish runner-up to the Detroit Tigers’ Ty Cobb for AL MVP.