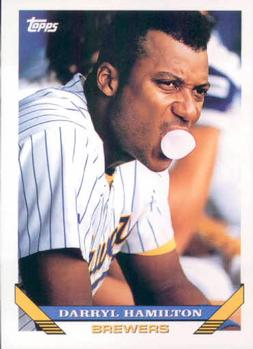 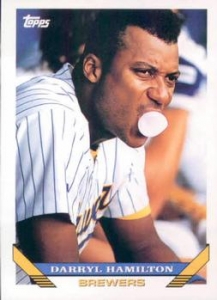 As he sat on the Toronto Blue Jays bench for the first time on August 28, 1992, David Cone was assigned to chart pitches against the visiting Milwaukee Brewers. The previous day the Jays traded infielder Jeff Kent and a player to be named later (outfielder Ryan Thompson) to the New York Mets for the right-handed starter, adding pitching strength for a possible post-season run. Cone was scheduled to pitch the following day.

The Brewers limped into Toronto for a four-game stand on the final August weekend. The Blue Jays won the first game, 5-4, with Jack Morris picking up his 17th victory, to stretch their American League East lead over the idle Baltimore Orioles to 2½ games and push the third-place Brewers to 5½ back. The defeat was Milwaukee’s fifth straight, and its 10th consecutive loss on the road. The home team was cruising into overdrive for the stretch run, while the visitors were sputtering.

Before the day was over, however, the home team would have used six pitchers to throw 255 pitches, one of which, struck by Paul Molitor, was a home run. Milwaukee batters smacked 30 other hits (four doubles and 26 singles). The last time a team had 31 hits in a nine-inning game was in 1901.

For Toronto’s pitching staff, the disaster was not a sudden event like an earthquake. Rather, it was nine innings of agony, as no one seemed capable of taming the Brewers.

“Whoever we threw out there, they hit,” Toronto starter Jimmy Key said after the game.1

Key had a quick night and not in a good way. Milwaukee’s leadoff batter, Pat Listach, opened with a single, stealing second as Darryl Hamilton struck out. Molitor’s homer spotted the Brewers a 2-0 lead. Key, a laconic lefty from Alabama, got Robin Yount to fly out to right field before ending the inning by getting John Jaha on a called third strike.

The Blue Jays went quietly in the bottom of the first with Brewers rookie starter Cal Eldred sandwiching a fly out by Roberto Alomar between strikeouts of Devon White and Joe Carter.

In the second, Key gave up a run on a walk, a double, and a groundout. Key got a second groundout (with a runner staying at third) but was pulled by manager Cito Gaston after issuing his second walk of the inning. Mike Timlinprevented further damage by coaxing a groundout from Yount with two on to end the inning.

Timlin opened the third inning by getting Mo Vaughn on a called third strike. The pitcher would finish the inning but not before a walk and five singles scored four more runs to put the Brewers ahead by 7-0.

A pair of singles and some astute baserunning by Kelly Gruber got the Jays their first run in the bottom of the third.

Doug Linton came on in relief of Timlin to start the fourth. Vaughn lined out to center. This was followed by Yount’s double, walks to Jaha and B.J. Surhoff walk, and singles by Kevin Seitzer, Scott Fletcher, Listach (now 3-for-4 by only the fourth inning), Hamilton, and Molitor. Gaston had little choice but to go to a fourth pitcher. Bob Macdonald came in with two on and still only one out with the Brewers about to bat around. He got Vaughn swinging (his second time to be put out in the inning) before getting Yount to fly to right. At 13-1, the game was assuredly a laugher.

Macdonald was the longest survivor of the Jays pitching staff in the game, lasting 3⅔ innings. He was touched for three runs on eight hits. He left with the score 16-2.

Mark Eichhorn, the fifth Jays pitcher, took the mound to open the eighth. The Brewers were neither sated nor yet tired from their exertions, though perhaps home-plate umpire Don Denkinger was. After giving up a single to Dante Bichette to open the inning, Eichhorn got Jaha to fly out. He then faced Surhoff. On a wild pitch, Bichette took second. Meanwhile, the umpire lost track of the count and Surhoff walked on the next pitch, which was ball five. The runners advanced and Seitzer was safe at first on an infield single to second base. A sacrifice fly by Fletcher followed by consecutive singles by Jim Gantner and Hamilton scored three more runs before Molitor grounded into an unassisted fielder’s choice to second baseman Alomar.

David “Boomer” Wells came on for the Blue Jays in the ninth. He got two outs before the Brewers began slapping the ball around again. Jaha singled, Surhoff singled, Seitzer doubled, and Fletcher singled. When Gantner singled to score Seitzer, it was his team’s 31st hit of the game, tying the record for the most hits in a nine-inning major-league game in the twentieth century. Wells finally earned his third out when he got Hamilton to ground into an unassisted fielder’s choice to Alomar at second. Some Toronto fans, eager to see more history, booed after the Blue Jays recorded the final out in the top of the ninth.

The Jays went quietly in the ninth. The final score: Milwaukee 22, Toronto 2.

Eldred’s record improved to 5-1, while loser Key fell to 8-12. He was stoic in the locker room after the game. He was asked what Cone, the Blue Jays’ new acquisition, might make of the game. The newest Blue Jay had stopped charting pitches sometime during the fifth inning.

“I guess he’s thinking, ‘Tough league.’ We’ll have to ice his wrist down after that one,” Key joked.2

According to a newspaper report, a fan posed in a window of the hotel visible to SkyDome patrons during the game with a noose around his neck. Brewers broadcaster Bob Uecker described the game as being “right up there with the ugliest.”3

The Brewers tied a standard set by the New York Giants on June 9, 1901, when the visitors pounded out 31 hits in Cincinnati off three Reds pitchers. The score was 25-13 for the Giants when fans ran onto the field with two outs in the ninth, causing umpire Bob Emslie to declare a 9-0 forfeit for the Giants.

Milwaukee’s 31 hits established an American League mark for the most hits in a nine-inning game. (Cleveland had 33 hits in an 18-inning game in Philadelphia in 1932.) The previous standard had been set by the New York Yankees in a 1923 game in Boston when they smacked 30 hits. Fletcher and Seitzer both had five hits for the Brewers, while Listach and Hamilton each had four. Molitor had three hits. Even though they scored 22 runs, Milwaukee batters also stranded 16 runners.

The attendance in Toronto was announced at 50,408. Among them was Arthur M. (né Knischewsky) Kenesky, a retired poultry farmer who was introduced on the scoreboard on the occasion of his 104th birthday. The aged fan would have been just 13 years old when the Giants enjoyed their 31-hit game. As it turned out, the aged Kenesky lived long enough to experience two World Series championships by the Blue Jays, the first of which they won just 57 days after the 22-2 drubbing.