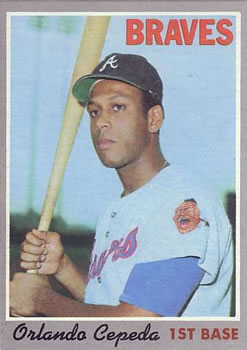 When a baseball fan heads to a ballgame, it’s usually to root for his/her favorite team or player. But many of us attend with the additional thought that we might see something we have never witnessed before. A crowd of 36,413 attended the game between the Chicago Cubs and Atlanta Braves at Atlanta Stadium on Friday night, August 29, 1969. Those who got there on time were treated to a bizarre baserunning demonstration by the Cubs in the first inning that resulted in a one-of-a-kind triple play.

The Cubs came into Atlanta with a two ½ -game lead in the National League East. 1 They would sweep the Braves that weekend, but on September 3 in Cincinnati they lost the first game in their epic collapse. The Braves were in second place in the National League West on the 29th and their weekend losses to Chicago dropped them into the fourth spot. While the Cubs’ fortunes went downhill after the weekend, the Braves regrouped with six- and then 10-game winning streaks that gave them the division title by three games.

The Braves sent Pat Jarvis to the hill to face Cubs leadoff hitter Don Kessinger. Kessinger singled and Glenn Beckert followed with a single. This brought Billy Williams to the plate. Jarvis balked the runners up a base, putting gray hairs onto Braves manager Lum Harris’s head. Williams hit a grounder to first baseman Orlando Cepeda, who took the play himself.

Cepeda looked up and saw that Beckert was heading to third. “It was a bonehead play on my part,” said Beckert.2 Cepeda threw to shortstop Gil Garrido to trap Beckert. During the rundown to catch Beckert, Kessinger took off for the plate and Garrido fired to catcher Bob Didier. A rundown to get Kessinger went from the catcher to Clete Boyer at third, back to Jarvis covering the plate and finally to second baseman Felix Millan at third. Millan tagged Kessinger and fired to second, where left fielder Rico Carty put the tag on Beckert for the third out.

The Braves had just completed a highly improbable 3-6-2-5-1-4-7 triple play. No major-league triple play has ever involved more defensive players.3 Manager Harris joked that “we’ve been practicing that one.”4 Williams had stood at first watching the whole event unfold. Just over two weeks earlier he had hit into a more conventional triple play in San Diego. On that occasion he had hit a line drive with the runners on the move.

The triple play had started with a groundout. Bill Hands, the Cubs starter, and Jarvis proceeded to pitch scoreless ball until the sixth. In the first five innings 19 groundball outs were recorded, not including the triple play. In the sixth, Kessinger launched a triple into center field and came home on Beckert’s sacrifice fly. The Braves responded with a leadoff double from Millan. He came home with one out on a single up the middle by Carty.

The Cubs had future Hall of Famers Ernie Banks and Williams in the lineup as well as fan favorites Beckert and Kessinger, but the hero of the day was Jim Hickman who started the season as a platooning right fielder. He won the everyday job and in August batted .301, hit 10 homers, and drove in 25 runs. He credited his turnaround to playing daily. His late-season breakout led to his career year in 1970, when he batted .315 and launched 32home runs.

Hickman led off the top of the seventh with a blast over the left-field fence off Jarvis’s first offering, making the score 2-1. Hands survived a seventh-inning error by Williams and an eighth-inning bobble by Kessinger to hurl scoreless ball the rest of the way for his 16th win of the season. It also snapped a five-game winning streak by the Braves. Cubs skipper Leo Durocher proclaimed after the game, “We needed that one. The win Thursday against Cincinnati and now this turns us around.”5 Little did he know what awaited his team.

3 The “longest” triple play also involved seven players like this one, but it took nine exchanges. It happened on May 16, 1913. The Philadelphia A’s were on defense versus Cleveland.