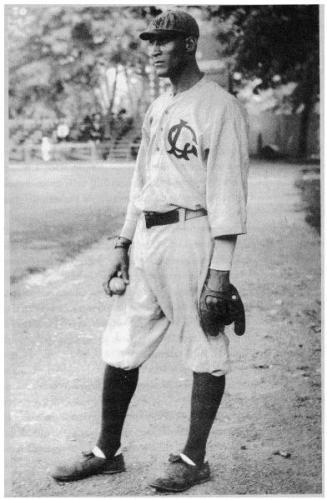 Four thousand fans arrived at Maryland Park on Sunday, August 3, 1924, for a doubleheader between the hometown Baltimore Black Sox and the visiting Brooklyn Royal Giants. The Black Sox were in third place in the eight-team Eastern Colored League (ECL) with a 22-16 record, and the Royal Giants were in sixth place with an 11-19 record.1

In the first game of the doubleheader, the Royal Giants sent a legend to the mound: Cyclone Joe Williams.The 6-foot-4 Texan had blazing speed and extraordinary control. He dominated Negro League hitters, and from 1912 to 1919 he compiled an 18-5 record against major-league opposition, beating Grover Cleveland Alexander, Chief Bender, Walter Johnson, and Rube Marquard.2 Williams was nearly 40 years old in 1924 (no one knew for sure exactly how old he was), but he could still pitch with the best of them.

Prepared to face the legend was Baltimore’s first baseman, Jud Wilson, “a veritable Babe Ruth with the bat.”3 Wilson led the ECL with a .373 batting average in 1923.4 His nickname was “Boojum” for the sound his line drives made when they caromed off the fence.5

Brooklyn’s Bobby Scott and Bunny Downs started the game with singles off Baltimore’s pitcher, Bullet George Britt. Eddie Douglass, Brooklyn’s player-manager, helped Britt get out of the jam by grounding into a double play. In the bottom of the first inning, Cyclone Joe allowed a leadoff single to Wade Johnston, but Crush Holloway grounded into a double play and the mighty Wilson struck out. Three Baltimore errors in the third inning gave Brooklyn the first run of the game. Britt and Williams stifled the hitters, and after five innings, the score was 1-0.

In the top of the sixth, Williams slugged a two-run homer into the right-field bleachers. In the bottom of the inning, he faced the heart of the Baltimore lineup. Holloway and Wilson singled. John Beckwith also singled, but Holloway was thrown out at the plate. Julio Rojo, a Cuban catcher, smacked a double to center field, scoring Wilson and Beckwith. After six innings, Brooklyn led 3-2.

In the top of the seventh, Brooklyn loaded the bases on two singles and an error. A pair of sacrifices brought in two runs. Williams then doubled to left field to drive in a third run. In the bottom of the inning, he retired the Black Sox in order. The Royal Giants led 6-2 after seven innings. Williams was getting it done on the mound and at the plate.

The Black Sox would not give up. With one out in the eighth inning, Holloway reached base on an error and Wilson drew a walk. Beckwith singled, driving in Holloway, and Rojo doubled to bring in two more runs. The Brooklyn lead was now 6-5. After Rojo advanced to third base on a sacrifice, Pete Hill stepped to the plate as a pinch-hitter. Hill was the 41-year-old manager of the Black Sox and a Negro League legend. He got his start in professional baseball with the Pittsburgh Keystones in 1899.6 Williams and Hill had faced each other many times over the years. This time Williams won the matchup, as Hill grounded out to the second baseman.

The Royal Giants scored an insurance run in the top of the ninth, and Cyclone Joe retired the Black Sox in order in the bottom half. The final score was Brooklyn 7, Baltimore 5.

“Those were great players back then. But nobody knows about us anymore. If you put all these stories in the sporting pages, they could read all about it and understand how it was. But that’s lost history, see? It’s just past, that’s all. Nobody’s going to dig it up.”7 — Crush Holloway, 1969

“When future baseball writers
Give honor men a crown,
The palm will go to Cyclone Joe,
He’ll wear the laurel crown.
When kiddies hug the wintry fire
And northern breezes blow,
They’ll sound his praise with one accord;
They’ll cheer for Cyclone Joe.”8

In preparing this article, the author relied on the game description given in the August 8, 1924, issue of The Afro-American, a Baltimore newspaper.