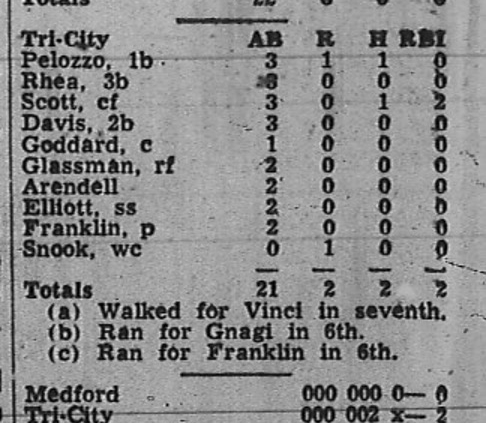 In the summer of 1971, Jay Franklin had the baseball world eating out of his hand. The first-round draft pick of the San Diego Padres signed a rich contract1 and joined the Tri-City2 Padres of the Class A Northwest League, where he set a league record for strikeouts. In his last minor-league appearance of the year, with a big-league call-up in his back pocket, the young fastballer pitched a no-hitter to clinch a pennant for his team. And — oh, yes — he was only 18 years old when all of this took place.

Injuries kept Franklin from fulfilling his potential, while personal problems have troubled the former Virginia high-school star off the field. But this story focuses on his day in the sun — his no-hitter of August 30, 1971, that capped a successful rookie season in the minors and sent him to the big leagues on a high note.

The Northwest League was a short-season league whose six teams played between 78 and 80 games apiece in 1971. Tri-City was by many measures the circuit’s best team. The Padres led the league in batting average, home runs, runs batted in, complete games, and shutouts, and were second in team earned-run average. As of August 30, Tri-City (at 47-29) held a 1½-game lead over the Walla Walla Phillies, who had completed their season with a record of 47-32.3 A win for the Padres in either game of their doubleheader against the Medford Dodgers would clinch the pennant. According to the box score, 576 spectators came out to Kennewick’s Sanders-Jacobs Field to watch. Medford, which came into the doubleheader with a record of 33-43, romped to a 9-2 win in the opener.

Seven players who appeared for the 1971 Tri-City Padres later reached the major leagues, and four of them started the second game on August 30. Center fielder John Scott hit third in the order, second baseman Bob Davis4 hit cleanup, catcher Joe Goddard hit fifth, and starting pitcher Franklin — who was notified three days earlier of his impending call-up to San Diego5 — hit ninth. Future big-league pitcher Frank Snook also appeared as a designated “wild-card runner” for Franklin in the sixth, a courtesy used by both teams when their pitchers reached base. The Tri-City manager was Cliff Ditto, a scout and minor-league manager in the Padres system for many years.6

Medford was managed by Bill Berrier, a former outfielder in the Dodgers system who managed Class A teams affiliated with the Dodgers for 10 seasons in the 1960s and ’70s. Only one member of the 1971 Medford team eventually reached the big leagues — 17-year-old catcher Kevin Pasley — and he did not play in either game on August 30.

Medford’s starting pitcher for the second game was righty Richard “Ric” Gnagi (pronounced “NAW-gee.”)7 The 1971 season was the 22-year-old Gnagi’s only year of affiliated minor-league ball. He split the year between two Class A teams, Bakersfield and Medford, putting up a combined record of 3-8 and a 4.50 ERA in 26 games, including 11 starts. Before going professional, he’d once been on the same American Legion team as future Dodgers pitcher Sandy Vance in Pasadena, California.8

Franklin got off to an unhittable start, striking out the first five Medford batters and eight of the first 11.9 Gnagi, while less dominant, was just as good. Through the first five innings, neither pitcher allowed a hit. Gnagi allowed only one baserunner in that stretch, while Franklin allowed two.10 Neither team scored.

In the sixth inning, the pitchers’ paths diverged just far enough to make the difference. In the top of the inning, Medford left fielder Bill Lawrence flared a ball into right field that looked as though it had a chance to drop. Tri-City right fielder Tony Glassman ran down the looper and caught it on the run to preserve Franklin’s no-no. The play was later described as Medford’s closest approach to a hit.11

Medford’s fielding was not as sharp in the bottom of the inning, and it cost them the game. Gnagi began by striking out Franklin, but the third strike got away from catcher Marty McCarter and Franklin took first base. (He was replaced on the basepaths by Snook, the “wild-card runner.”) Padres first baseman Nick Perlozzo12 grounded to his opposite number, Medford’s Tom Kostolsky, whose long home run had helped win the first game of the doubleheader. Kostolsky fielded the ball, but when Gnagi failed to cover first, Perlozzo reached safely for the first hit for either team. A passed ball moved both runners up, and center fielder Scott dropped a single in front of Medford right fielder Mike Vincy to score both runs and give Tri-City a 2-0 lead. It was the second and final hit of the game.13

Franklin began the seventh by striking out Kostolsky and shortstop Tim Evans, putting him one out away from a no-hitter. Third baseman John Lizalde was hit by a pitch, and pinch-hitter Mike Bubalo drew the fourth walk issued by Franklin. Franklin’s second wild pitch of the game put both runners in scoring position. But the rookie held on, striking out McCarter on a 1-and-2 pitch to seal the Northwest League’s first no-hitter in two years.14 It was Franklin’s 13th strikeout of the evening.

After the game, Franklin — only 90 days out of high school — said simply, “I just couldn’t believe it.”15 Manager Ditto had more to say. He praised Franklin’s development over the course of his rookie season, in which he went 8-4 with a 3.34 ERA and a league-leading 134 strikeouts in 104 innings.16 “Jay is no longer afraid to throw the ball like he can,” Ditto said. “He’s convinced now, I think, that he belongs in pro baseball and that he belongs in the majors as well.”17

The results of Franklin’s September cup of coffee with San Diego seemed to support that conclusion. In his first game, he pitched two shutout innings of relief against Atlanta. In his second, he surrendered one unearned run in 1⅓ innings against Cincinnati, striking out Johnny Bench. His third and last outing was less successful: Given a start against Atlanta, he gave up three homers in 2⅓ innings and took the loss. But being only 18, he appeared to have plenty of time to improve and figure things out.18

Then came a disastrous 1972. News accounts in mid-February noted that Franklin had hurt his elbow in an exhibition against San Diego State University, but was expected to improve with a week’s rest.19 By mid-May, reporters were noting that Franklin would miss the season and might never pitch again due to chronic elbow trouble.20 Returning to baseball in 1973, Franklin pitched five more seasons at Double A and Triple A in the Padres organization, compiling a lifetime minor-league record of 41-35 with a 4.44 ERA. He converted to a reliever, and later to a side-armer,21 but was never able to recapture the dominance or effectiveness he had before the injury.

After leaving baseball, Franklin’s personal life was upended by chronic mental illness, alcoholism, and the losses of several family members and close friends.22 His story is unfortunate, but it does not dim his accomplishments on the field, including his pennant-clinching moment of glory in August 1971 in Kennewick, Washington.

Neither Baseball-Reference nor Retrosheet provides box scores of minor-league games, but the August 31, 1971, editions of the Tri-City (Kennewick, Washington) Herald and Medford (Oregon) Mail-Tribune published box scores. The box score pictured here is from the latter newspaper.

The author thanks the staffs of the public libraries in Kennewick, Washington, and Medford, Oregon, for providing copies of the game stories and box scores from their local newspapers.

2 The three cities represented by Tri-City were Richland, Kennewick, and Pasco, Washington.

3 Northwest League standings as printed in the Spokane (Washington) Spokesman-Review, August 30, 1971: 10. The league was divided into two three-team divisions, with Tri-City and Walla Walla in the Northern Division. The top team in the Southern Division, the Bend Rainbows, had a record of 42-35 and would not have been able to catch Tri-City.

4 While Davis played exclusively at catcher during his eight-season big-league career, he played 12 games at second base with the 1971 Tri-City team. He also appeared at first base and third base and in the outfield during his minor-league career.

16 Franklin’s statistics at Tri-City are reproduced here as they were reported in several news accounts at the time, including “Franklin Bids Farewell with No-Hitter Finale” and “Jay Confident but ‘Can’t Believe’ Big League Job Comes So Soon.” Baseball-Reference.com lists Franklin’s record with Tri-City in 1971 as 8-1 rather than 8-4, with an ERA of 3.12 rather than 3.34.

18 Franklin’s catcher against Atlanta was 19-year-old Mike Ivie. Media reports of the game pointed out that Franklin and Ivie’s combined ages (37) were the same as that of Hank Aaron, who hit career home run number 638 off Franklin.

20 Bill Carter, “Padres’ Prize Battery Breaks Up,” Alexandria (Louisiana) Town Talk, May 13, 1972: A8. Franklin was assigned to a Padres farm club in Alexandria for 1972 after his initial injury, but never pitched there.