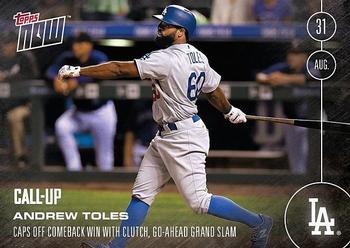 They just don’t make doubleheaders like they used to do; in fact, they hardly make them anymore. Long a fixture of the national pastime, the twin bill has become a relic; forgotten, antiquated, like wool uniforms and train travel. In 2016 only 14 “doubleheaders” were played, all due to weather-related rescheduling of prior games.1 None were true doubleheaders; all required separate admission to each game.

But on Wednesday night, August 31, this dinosaur roared, waking up a complacent club. While the Dodgers were far from struggling (they started the day with a .557 winning percentage), their NL West Division lead had shrunk to one game after they were shut out 7-0 in the day game against Colorado while the Giants beat the Diamondbacks. They still had another game to play: rain on Tuesday had pushed that night’s game to Wednesday night.

The Dodgers and Rockies shared 23 years of undistinguished history together since Colorado joined the National League in 1993. Unlike LA’s rivalry with the Giants, it did not start in New York City; unlike the Cubs and Cardinals, they were not bound by geographical proximity. Colorado entered the season 161-217 against the boys in blue; by the time the first game ended, they had split the season series. There was little reason to believe this makeup contest would be memorable. Official attendance was 22,683 though one would be hard pressed to find that many souls in the stands once the Rockies jumped to an 8-2 lead through seven innings.2 With just two innings remaining, any bettors left in Coors Field would have begun making plans for the Broncos, Avalanche, and Nuggets seasons.

Jeff Hoffman felt good. Despite throwing on only four days’ rest, he had kept Los Angeles to two runs in five innings, navigating through a powerful lineup relatively unscathed. He had been roughly welcomed by veteran Chase Utley, who swatted a home run to deep center field from the leadoff slot. Hoffman’s club had backed him up with lumber, knocking out starter Bud Norris (three innings, six runs, five of them earned) before the Dodgers clotted the bleeding. Stephen Cardullo, celebrating his 29th birthday and himself a rookie playing in only his fifth big-league game, clobbered a grand slam in the first after an earlier run had scored; it was a storybook day for the first baseman, who had slugged a pinch-hit homer in the first game.3 He had spent the last four years in the Independent League wilderness before the Colorado organization signed him to a Triple-A deal earlier in the year.

When Hoffman took the mound for the top of the second, he had a lead for the first time in his brief major-league career. Although the visitors added another run when Andrew Toles doubled in Yasmani Grandal, the Rockies riposted with an unearned run in the third to make it 6-2. Toles had been in the big leagues for less than two months, completing an unexpected progression by being promoted from Class A to Double A to Triple A and then the majors within the same year. “All I want to do is contribute,” the soft-spoken outfielder said after the game.4

As he hit the showers, Hoffman could feel satisfied that no matter what happened, he could not lose the game. Then again, he wanted to win it. Jordan Lyles (one inning, two walks) and Jake McGee (one inning, one strikeout) kept it in cruise control. In the seventh, Nolan Arenado added a two-run blast, padding the lead to six runs.

Major-league teams were 1-448 thus far in 2016 when trailing by six or more runs in the eighth inning.5 Perhaps no one told the Dodgers; maybe they did not want to hear it. Matt Carasiti began the eighth inning on the mound for the Rockies. Sporting an unsightly 10.61 ERA, he retired Justin Turner, then in his third year with the Dodgers. The tonsorially challenged third sacker battled to a full count but ended up meekly grounding to short. Veteran Adrián González, unfazed by an 0-and-2 hole, drilled a double to right field which was followed by another by Grandal, this one to center field, which scored González. A five-pitch walk to Josh Reddick ended Carasiti’s evening and brought in Carlos Estevez. The tall Dominican had worked a perfect inning in the first game, but Dodgers outfielder Joc Pederson laced the first offering to right field, scoring Grandal. Toles then loaded the bases with a single, bringing Howie Kendrick to the plate. The veteran contact hitter poked a sacrifice fly to right field, scoring Reddick, before Utley grounded out to second base.

Though the Dodgers scored three runs in the eighth, their win probability added increased only from 1 percent to 4 percent, hardly the stuff of motivational posters.6 But a comeback classic takes more than a highlight; it hinges on overconfident moves, poor positioning, or perhaps a blown call. It makes for a combustible mix, like Mentos and diet soda, agitated for explosion. In other words, it took the ninth inning.

Adam Ottavino faced eventual Rookie of the Year Corey Seager, who showed uncharacteristic plate discipline and took first base on five pitches. Turner struck out swinging and González lined out to short, putting the Rockies one defensive out from a doubleheader sweep. Seager moved to second on defensive indifference; he then daringly took third on Grandal’s single to left field. Reddick singled to center out of the reach of middle infielders DJ LeMahieu and Cristhian Adames, scoring Seager. Pederson, himself a free-swinger, was granted a base on balls in a five-pitch appearance, loading the bases for Toles.

In the visitors bullpen, All-Star Kenley Jansen had quickly begun to loosen up. He had not seen action in the first game, and with the Rockies’ six-run lead, he was not expecting to pitch. That all changed in a hurry. Ottavino’s second pitch was too close to the middle of the plate and Toles hammered the baseball to deep left field for his first (and only) career grand slam. A shell-shocked crowd watched in silence as Ottavino retired Kendrick on two pitches to close the inning, but the damage had been done. The scoreboard now read 10-8, Los Angeles.

Toles’s path to the majors had been both torturous and tortuous. His astonishing 2016 voyage was no overnight success. Selected by the Marlins in the 2010 draft, he chose to enroll at the University of Tennessee, though he transferred to Chipola College. Tampa Bay selected him two years later, and he signed with the Rays. He performed well across the Rookie and Class-A leagues but took a year off baseball in 2015, struggling with anxiety. Major leaguers have long battled mental issues by euphemisms, from the “yips” when throwing to a base to a seemingly overnight inability to throw strikes. Khalil Greene, Dontrelle Willis, and Zach Greinke have taken time off in their careers to deal with the lingering issues of anxiety and depression, among other ailments.7 The 24/7 coverage of social media has made their stories well-known, but others preceded them: Marty Bergen savagely assassinated his wife and children in 1900, but Jimmy Piersall beat the odds to enjoy an All-Star career.8

A converted catcher, Curaçao native Jensen wasted no time punching out Charlie Blackmon. LeMahieu gave him a tough, six-pitch at-bat but ultimately saw a third strike cross the plate. Arenado singled to left field but David Dahl struck out looking. In a scant 15 pitches, the game was over. Dodgers manager Dave Roberts was emphatic about Toles’s strong contributions down the stretch: “To see where he’s come from to now helping a contending team win games is remarkable. There’s no reason why this ride can’t stop for him. He’s opened up a lot of eyes.”9

Baseball, with seemingly unlimited scenarios, lends itself to “what ifs?” Would the game have ended differently had it been played on its original scheduled day? Perhaps. Maybe it would have been just as different had it been played a day later (September 1) when rosters expanded to 40 men. With more arms in the bullpen, Colorado could have mixed-and-matched lefties and righties and taken advantage of the matchups against new faces. Then again, the Dodgers could have done the same.

In addition to the sources cited in the Notes, the author consulted game information on Baseball-Reference.com and Retrosheet.org

6 “Win probability” calculates the specific probability added or subtracted by each possible play. Baseball-Reference shows the data in the game summary. baseball-reference.com/boxes/COL/COL201608312.shtml.