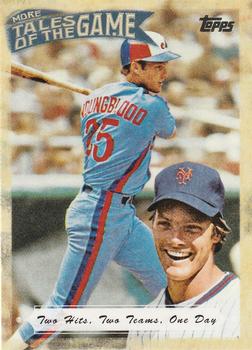 One of the more exciting days on the baseball calendar is the trade deadline on July 31.1 Networks and sports talk shows fuel the speculation and rumor mill about who could be on the move. Team officials must determine if their club is a pretender or a contender, a buyer or a seller. With the expanded playoffs as of 1995, and again in 2012 with the additional wild card team, there are more teams that consider a playoff berth as a viable option.

For many players the move is not a surprise. Perhaps their contract is too hefty for a team, or the lure of talented prospects sways a club to go into a rebuilding mode. There are times when a player is swapped and the move comes from out of the blue, with no advance indication. Either way, those fans who are lucky to be rooters for a contending team spend hours writing out various batting lineups, pitching moves, or bullpen availability depending on the acquisitions. Many times the forgettable “player to be named later” is thrown in the deal. By the time the trade is consummated, the tale of the season has been told and the new player may be long forgotten.

From 1923 to 1985, the deadline to make a nonwaiver transaction was June 15. It may have been difficult for clubs to make a decision so early in the year. On June 15, 1982, the New York Mets were in the thick of the National League East Division race. They were tied with Philadelphia for third place, just 5½ games behind front-running St. Louis. But as the season wound through the summer months, New York fell behind the pack.

At the end of July, the Mets and the Phillies had separated. Philadelphia was now in first place while New York slipped to fifth, 13½ games off the pace. The only team in the division who could break the Mets’ fall to the basement was the Chicago Cubs.

On August 3, New York visited Wrigley Field for a three-game series with Chicago. Both clubs were playing for pride at this point in the season. Chicago’s Doug Bird fired a three-hit shutout as the Cubs took the opener, 5-0. The second game of the series was another matinee at the “friendly confines”. The pitching matchup was Craig Swan (6-4, 3.59 ERA) and Ferguson Jenkins (6-12, 3.12 ERA).

The Mets were looking to deal, and the player they were dangling was Joel Youngblood.

Youngblood was a fine defensive outfielder who was capable of playing all three outfield positions as well as second base. He came up in 1976 as a bench player on Cincinnati’s “Big Red Machine.” Youngblood posted consecutive years of 18 outfield assists in 1979 and 1980. That figure dropped to 6 in the strike-shortened 1981 campaign. He was an adequate batsman, hitting around .260 for much of his career.

However, Youngblood had signed a three-year $300,000 contract with New York in 1980. The Mets were eager to dispose of Youngblood rather than lose him to free agency.

As the game got underway, a deal seemed imminent. “We hoped to make the deal by game time,” Mets general manager Frank Cashen said. “But there was a phone circuit problem, and we couldn’t complete it. (Mets manager George) Bamberger asked me what to do with Youngblood, and I told him to go ahead and start him, we’d take a chance on his getting hurt.”2

The Cubs struck first in the bottom of the second inning. Jenkins doubled to plate Jay Johnstone for the 1-0 lead. New York struck back quickly. With one man down in the top of the third, Bob Bailor singled. Swan also got a base hit to put runners on first and second. Wally Backman followed with a double. Bailor scored and Swan checked into third. John Stearns walked to load the bases. Youngblood stepped in and singled to score Swan and Backman. The Mets now led 3-1.

The base hit by Youngblood was his last in a Mets uniform. Word came down to the Mets dugout that Youngblood had indeed been traded. He was dealt to Montreal for the infamous player-to-be-named-later (pitcher Tom Gorman was sent to the Mets on August 16, 1982).

“This has nothing to do with Youngblood,” Bamberger said. “I told him that he has been super for us, and I hope he hits .350.”3

The Mets struck for two more in the top of fourth. Ellis Valentine led off with a single but was erased on a force out off the bat of Hubie Brooks. The speedy Brooks stole second base and then third. As it turned out, he could have stayed put, as Swan homered for the first time in his big-league career and the Mets now led 5-1.

Jenkins’ day was over as Chicago manager Lee Elia went to his bullpen and brought in right-handed reliever Mike Proly.

Mookie Wilson took over for Youngblood in center field. The Mets tacked on another run in the top of the fifth.

Chicago looked as if they might be getting to Swan in the bottom of the fifth inning. Ryne Sandberg led off with a double and scored on a single by Bill Buckner. But the Cubs did no further damage. Swan exited after six innings. He was charged with three earned runs, and struck out none, walked one. The Mets’ pen held the Cubs to one more run, and New York won, 7-4.

Meanwhile, Youngblood was on his way to Philadelphia, where the Expos were battling the Phillies in the third game of a four-game set. As the Mets and Cubs were playing out the regular season, the Phillies were looking down at the rest of the division. Montreal was making a final push, sitting in fourth place, seven games behind Philly. The Expos had dropped the first two games of the series. The pitching matchup for the third game was Scott Sanderson (6-9, 3.03 ERA) for the Expos and Steve Carlton (14-8, 3.08 ERA) was hurling for the Phillies.

“I got the word in the third inning at the Mets game in Chicago,” Youngblood said. “I made a plane reservation, went to the hotel to pack, realized I’d left my glove in the dugout, went back to the ballpark to get it, went to the airport, had dinner on the plane and took a cab to the ballpark. It was my idea to rush here. If I was a member of the Expos, I wanted to be here.”4

The Phillies answered with two in the bottom of the inning when George Vukovich singled home two runs. The Expos’ lead was cut to 3-2.

In the bottom of the sixth inning, Youngblood entered the game to replace Jerry White in left field. Philadelphia took the lead when Rob Dernier got aboard with an infield single. Pete Rose doubled to center to score Dernier. Gary Matthews walked. After the runners moved up on a groundout by Bo Díaz, Vukovich walked to load the bases. Manny Trillo singled home Rose and Matthews to give the Phillies a 5-3 lead.

In the top of the seventh, Youngblood singled with two out. He became the only person in major league history to get a base hit for two different teams, in two cities (and off two future members of the National Baseball Hall of Fame.)

Wallach connected for his 14th home run, a solo shot in the eighth. They were unable to score again, so Philadelphia won, 5-4.

The acquisition of Youngblood did not have the intended outcome for Montreal. He batted .200 for the Expos in 40 games. His overall batting average was .240 between New York and Montreal. St. Louis won the NL East in 1982, while Philadelphia finished in second place, three games out and Montreal ended their season in third, six games back.

Youngblood signed with San Francisco, playing the next six years on the bay. His last season was 1989, when he returned to Cincinnati.

Although such a trade had never happened before, something similar occurred decades earlier. On May 30, 1922, Max Flack was traded from the Chicago Cubs to the St. Louis Cardinals for outfielder Cliff Heathcote. On that day, the Cardinals and Cubs played a doubleheader at Cubs Park. Flack and Heathcote both played in the first game as well as the second, as the swap was made between games of the twin-bill.5

The author would like to thank SABR member Norm King for his help with this article.