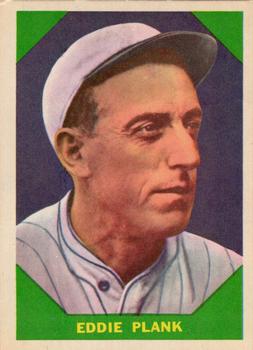 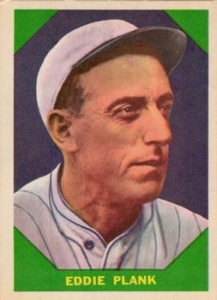 On July 23, 1917, Eddie Plank and his St. Louis Browns teammates boarded a train bound from St. Louis to Boston. In the age of railroad travel, the Browns – the American League’s westernmost franchise – were accustomed to lengthy homestands, and long road trips; and this trip would be long. St. Louis was not scheduled to play another home game until August 17, after visiting Boston, New York, Washington, Philadelphia, and Detroit.

Plank was undoubtedly cheerful as the train departed St. Louis. He had blanked the Washington Senators 4-0 at Sportsman’s Park on July 22 to raise his record to 5-3 and lower his earned-run average to 1.99. Plank was healthy and pitching well, and the Browns were playing better lately, winning five of their previous eight games. Plank was reserved by nature, but as the St. Louis Star and Tribune observed, “About the hotel and on Pullman cars, [41-year-old Plank] was as frisky and full of fun as the youngest member of the club.”1

Plank was not always healthy or happy in 1917. He had left the team in June complaining of stomach problems, prompting teammates to speculate that he would not return.2 Plank, after suffering a nervous breakdown on the team’s last East Coast trip,3 spent time with his wife and child in Gettysburg, Pennsylvania, before rejoining the Browns in Detroit in time to defeat the Tigers, 3-2 on June 20.

St. Louis arrived in Boston on July 25 clinging to seventh place by 10 percentage points over the Philadelphia Athletics, only to drop all five games to the Red Sox and fall into eighth. Plank’s hard-luck 12-inning, 3-2 loss in the opener of a July 28 doubleheader was the Browns’ fourth loss of that series.

Plank next pitched in the second game of an August 2 doubleheader in New York. He held the Yankees to four hits over seven innings before being lifted for a pinch-hitter, but lost, 3-1. The Browns were now 1-8 on the road trip, in last place with a 37-63 record, and 26 games behind the league-leading Chicago White Sox.

Plank’s next assignment – which turned out to be his last – was an August 6 rendezvous with Walter Johnson at Washington’s Griffith Stadium. The Browns had won the first game of the series 5-4, before losing 5-3 the next day, but the split was good enough to regain seventh place by 8 percentage points over the Athletics. Plank and Johnson had faced each other on several occasions, including a historic April 14, 1910, game at which William Howard Taft became the first US president to throw the season’s ceremonial first pitch.4

Johnson entered the showdown with Plank carrying an 11-13 record for the sixth-place Nationals, but his fortunes were on the upswing. He had won his last four decisions: two as a starter and two in relief. Nevertheless, with two-thirds of the schedule completed, Johnson’s record was below expectations; he had won at least 25 games in each of the previous eight seasons.

These pitching greats lured only 1,928 spectators to a Monday afternoon match between second-division teams. Among the crowd were 500 khaki-clad members of the District of Columbia National Guard, who employed a bugler, cheerleader, and booming voices throughout the afternoon – reminding one reporter of a college football rooting section.5

Neither team generated much offense through nine innings. Johnson relied on his fastball, Plank on his guile, and both men posted zeroes on the scoreboard.

Horace Milan singled off Plank to open the bottom of the first and advanced to second base on his brother Clyde Milan’s infield out, but he went no farther. The only other Washington threat before the fateful 11th came in the third inning when Eddie Ainsmith singled and stole second. After two outs, walks to Clyde Milan and Eddie Foster filled the bases, and Sam Rice slashed a hard grounder to the right side of the infield. But second baseman Del Pratt made a sensational stop and threw from the ground, nipping Rice at first for the third out.6

St. Louis mounted an attack against Johnson in the eighth, and only a great outfield throw preserved the shutout. Browns shortstop Doc Lavan doubled to center. Plank walked and Burt Shotton – who became Jackie Robinson’s first major-league manager 30 years later in Brooklyn – advanced the runners with a bunt. Earl Smith, recently rejoining the Browns from Omaha of the Western League, lifted a fly to center fielder Clyde Milan; Lavan waited for the catch, and charged for home. Milan fired a perfect strike to Ainsmith, who tagged Lavan inches from home plate to complete a double play.

That was the final offense by either side until the bottom of the 11th. Ainsmith started things with a walk, and Johnson popped a bunt to George Sisler for the first out. Horace Milan scorched a single to left on a hit-and-run, and Shotton bobbled the ball just enough for Ainsmith to beat Shotton’s throw to third.

Hoping for a play at the plate, St. Louis brought in the infielders, and Eddie Foster stepped into the batter’s box. Nearly one year earlier, on August 8, 1916, Foster doubled with one out in the ninth inning to foil Plank’s best shot at a no-hitter. On this afternoon Foster again disappointed Plank; sending a grounder skipping through the drawn-in infield and over second base, scoring Ainsmith to win the game, 1-0.

Johnson limited St. Louis to five hits and fanned three, improving to 12-13. He finished the season 23-16. Plank (5-6) also gave up five hits and struck out three but took the loss, sending the Browns back to the cellar. St. Louis ended 1917 in seventh place at 57-97.

During the game Johnson and Plank had been kidding each other, and Plank engaged in “friendly repartee” with Clyde Milan.7 In the ninth, Plank found humor in a blunder by Browns catcher Hank Severeid. The incident was described in this way: “[Plank] sent a floater up to Sam Rice [who] tried the darnedest to bunt the ball. Severeid saw what he was going to do, and instead of trying to catch the ball ran out to field it. As [Rice] didn’t connect with the slow one, Plank had a good laugh.” He laughed so hard, he lied [sic] down on the infield grass until he regained his composure.8

Plank pitched superbly and enjoyed himself at the ballpark, yet he retired within days. One sportswriter claimed Plank was often heard to say, “Unless I can be a winner, I don’t want to be in baseball.”9  Plank was certainly not winning.

Despite surrendering just four earned runs in 29 innings Plank had lost three consecutive starts, and the Browns had tumbled to the bottom of the standings. The stomach ailment that hounded Plank in June was back. Frustrated by his inability to win, and by the Browns’ futility, Plank called it quits.10

On August 11 a weeping Plank informed manager Fielder Jones he was retiring because the stress and strain of baseball was aggravating his stomach.11 Plank left the team, returned to Gettysburg, and Jones announced the retirement on August 14.

The Detroit Free Press told its readers Plank is “well fixed financially and will have nothing to worry about the rest of his days.”12 The Gettysburg Adams County News claimed Plank would “help direct the business of the garage recently purchased by his brother, Ira.”13 Plank also farmed, and led tours of the Gettysburg battlefield during retirement.14

Some doubted Plank’s retirement was on the up and up. “There are many who refuse to take this seriously,” said the St. Louis Post-Dispatch, and it explained its reasoning.15 According to the Post-Dispatch Plank had asked to be traded closer to his home after the 1916 season, and, when no trade was forthcoming, he reluctantly reported to St. Louis.16 Now, with his stellar pitching performance making him valuable to a contender, Plank’s announcement was viewed as a ploy to sign with a team closer to Gettysburg – and closer to first place. But scoffers were wrong; Plank’s retirement was final.

In addition to the Sources cited in the Notes, the author consulted the Baseball-Reference.com and Retrosheet.org websites for pertinent material and the box scores noted below, and obtained game-day information and descriptions of the play-by-play from newspapers listed in the Notes.

2 “Plank Quits Game Rather Than Play with Losing Club.”

3 “Plank Quits Game Rather Than Play with Losing Club.”

7 “Plank’s Change of Pace Bothers Griffmen for Longer Than an Ordinary Game.”

8 “Plank’s Change of Pace Bothers Griffmen for Longer Than an Ordinary Game.”

9 “Plank Quits Game Rather Than Play with Losing Club.”

10 “Plank Quits Game Rather Than Play with Losing Club.”