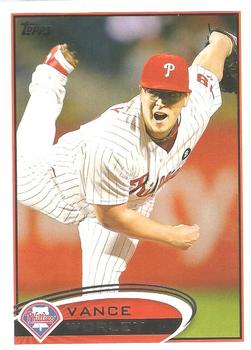 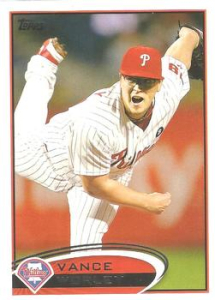 From 2007 to 2011, the Philadelphia Phillies won five consecutive division titles and two National League championships, highlighted with a World Series victory in 2008. The core of the team — first baseman Ryan Howard, second baseman Chase Utley, shortstop Jimmy Rollins, center fielder Shane Victorino and starter Cole Hamels — remained intact during this period, but by 2012 it was clear that the Phillies’ competitive window was closing because of injuries and age. Injuries sidelined two vital players the first half of the season. Howard was recovering from a torn Achilles tendon suffered in Philadelphia’s final postseason game of 2011 and Utley was receiving treatment for chronic knee problems.

With the team in last place in the NL East at the July 31 trade deadline, General Manager Ruben Amaro Jr. decided to make some changes, jettisoning two veteran outfielders for younger players under team control. Victorino, a member of the Phillies since 2005, was shipped to the Dodgers, and right fielder Hunter Pence, obtained in 2011 from the Houston Astros during Philadelphia’s push for the postseason, was sent to the San Francisco Giants. On the day he was traded, Pence said, “I don’t think anybody really anticipated the season that’s gone on. It was the perfect storm of injuries and things didn’t go right for us, so that’s the way the business of the game is and you have to understand that.”1

With key players missing because of injuries and popular players traded, apathy was emerging among Philadelphia’s fans. From July 6, 2009, until August 5, 2012, there was not an empty seat found during a game in Citizens Bank Park. But after 257 consecutive sellouts, Section 305 was barren for the Monday, August 6, game against the Atlanta Braves. Phillies manager Charlie Manuel said, “I’m sorry we didn’t sell out, because that just shows what kind of season we’ve had.”2

The Phillies took the field hoping to break a six-game losing streak to the Braves and lift themselves out of the cellar. Despite being under the weather, Vance Worley, who had won 11 games in 2011, started for the Phillies. After the game, the 24-year-old right-hander said, “I definitely wasn’t feeling my best, but I wanted to go out there and pitch for the team.”3 Veteran righty Ben Sheets was pitching for the Braves, having recently rejoined the rotation after recovering from Tommy John surgery. This was his fifth start of the year and second against the Phillies.

Both the Braves and Phillies were retired in the first inning, Domonic Brown’s double in the bottom half producing the only base-runner. Brown had been recalled from the minors on July 31 to fill one of the vacant outfield spots created by the trades of Victorino and Pence. His locker was placed next to that of Juan Pierre, a veteran outfielder Amaro acquired at the start of 2012, in the hope that Pierre’s work ethic would rub off on Brown. Refering to Pierre, Amaro said, “To be frank, he’s the guy I’d like to have most of our young guys most emulate.”4

Both teams mounted small threats in the second inning, but no scoring occurred until the Braves broke through in the third. With one out, leadoff hitter Michael Bourn drew a walk and moved to second on Martin Prado’s single. After Jason Heyward flied out to deep left, Freddie Freeman hit a grounder down the first-base line that appeared on replays to be foul. But the hard-hit ball was ruled a double and scored both runners. Freeman advanced to third on the throw from the outfield and scored on a wild pitch. Brian McCann walked, and Dan Uggla singled, but both were stranded when Juan Francisco grounded out. The inning ended with the Braves leading, 3-0.

The Phillies started a two-out rally in the bottom of the inning when Brown was hit by a pitch and Utley doubled, but the threat was quickly extinguished by Howard’s fly ball to left. In the fourth, the Braves continued the onslaught off Worley. Paul Janish doubled to deep left to start the inning. He went to third on Sheets’ sacrifice, and scored on a single by Bourn. After Prado flied out to deep left, Worley was done for the day. It was only the third time in 42 career starts that he pitched fewer than four innings. “It seemed every time I tried to let loose it didn’t go where I wanted,” said Worley. “I went out there with heart today.”5

Down by four runs, the Phillies mounted their best threat in the bottom of the fourth. John Mayberry Jr. led off with a home run to narrow the Braves’ lead to 4-1. The 28-year-old Mayberry had shown promise in his first three major-league seasons and was appointed a larger role in 2012.  Despite a disappointing season, he received more playing time after the trades. Kevin Frandsen kept the pressure on with a one-out single, but Sheets escaped without further damage by inducing a double play grounder off the bat of Brian Schneider.

Mayberry’s home run proved to be the only Phillies run of the game. The Braves added two more, on a single by McCann in the seventh inning and a home run by Heyward in the ninth. Sheets worked into the eighth inning, his longest outing of the year. Both managers talked glowingly about Sheets after the game. Braves manager Fredi Gonzalez said, “You can really tell the experience when he’s on the mound”6 and Manuel said that though Sheets had “lost a little pop on his fastball, he knows how to pitch and he worked us in and out.”7

The 6-1 win by the Braves was the Phillies’ 60th loss of the year, equaling their total from the prior year. As with many of the 2012 Phillies’games that came before, it featured bad pitching, coupled with an anemic offense. In the middle of the eighth inning, when the scoreboard showed the attendance as less than a sellout, everyone knew the streak was over. At the time it was the longest in the National League and the third longest in major-league history.8

Improving their play in the last two months of the season, the Phillies won 32 of their final 53 games to end the season in third place with an 81-81 record, missing the playoffs for the first time since 2006. Even though sellouts were no longer a regular occurrence, Philadelphia still ended the season with the largest average attendance in the major league. Phillies President David Montgomery summed up the team’s thoughts about the streak when he said, “The number of sellouts could not have been possible without the tremendous loyalty of our fans.”9