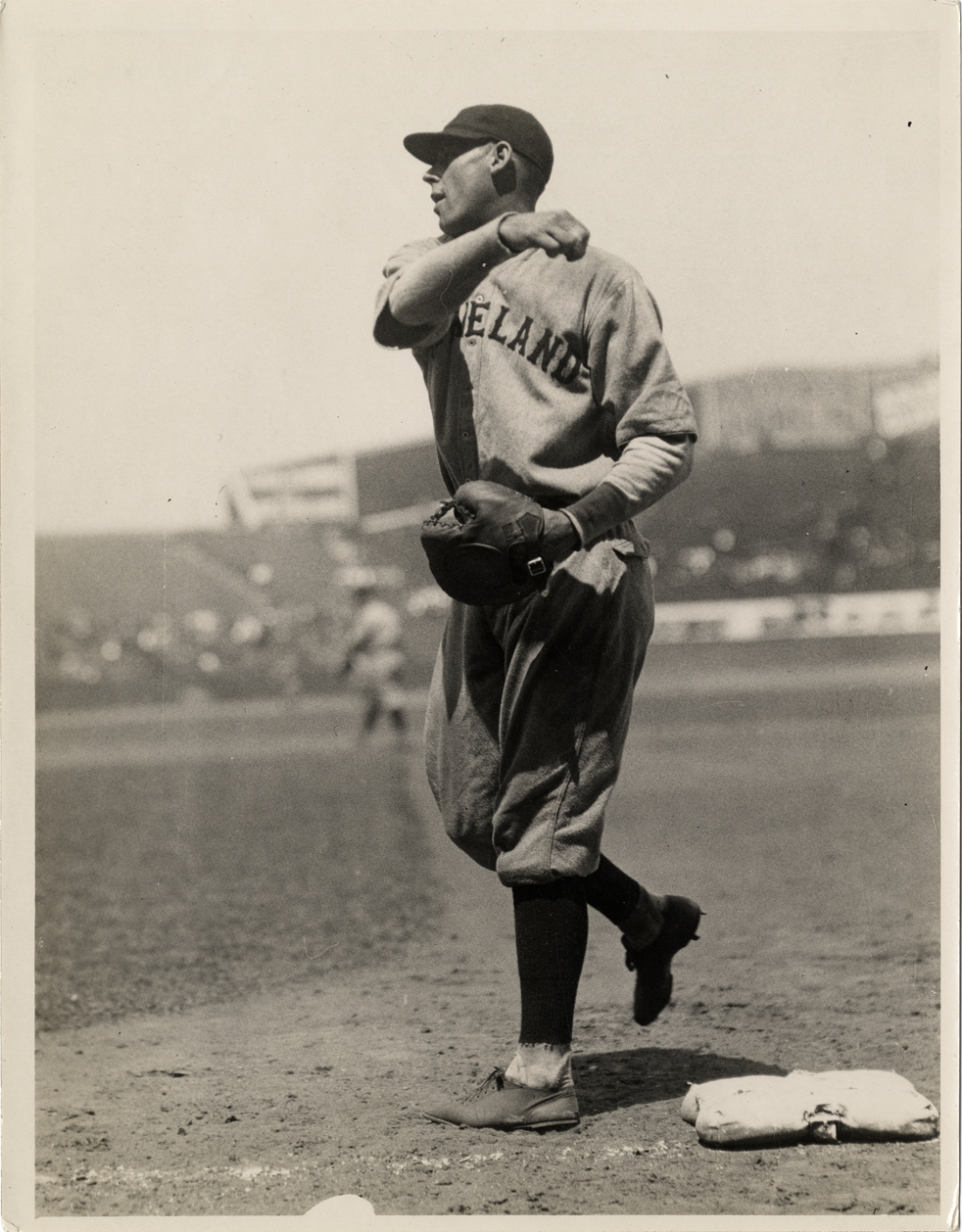 During early August 1923, the Cleveland Indians attempted to gain ground on the American League-leading New York Yankees. Entering the August 7 contest against the Washington Senators, Cleveland was mired in second place, 13½ games behind power-laden New York. The Indians started the season with a six-game winning streak and held first place throughout April, as the ballclub was credited with exceptional physical condition and esprit de corps.1

Losing records in May and June dropped the Indians into third place entering July. Cleveland compiled a 20-13 record in July and returned to second place on July 6. The following afternoon the Indians routed the Boston Red Sox 27-3 in the first game of a doubleheader, establishing the team record for the most runs scored in a game. Currently, the Indians were playing their 14th of a 17-game road trip that started July 23.

Cleveland’s offense was led by future Hall of Famers Tris Speaker and Joe Sewell, star outfielder Charlie Jamieson, hitting leadoff, and first baseman Frank Brower, enjoying the best season of his five-year career. Youngster George Uhle and veteran Stan Coveleski led the pitching staff, with Speaker serving in his fifth season as player-manager. Speaker, now 35 and playing in his 15th full major-league season, remained a dominant offensive and defensive force. He had paced AL hitters with a .474 on-base percentage and 48 doubles the previous season, and was “the best conditioned man on the Indian squad” and “a regular dynamo, and on the go every minute” throughout spring training.2

Washington opened the season with a three losses to the Philadelphia Athletics and remained in the second division throughout the summer. Washington dropped to the basement on June 17, and lingered in seventh place throughout July. The Senators opened August with a four-game winning streak and moved into sixth place. Future Hall of Famers Walter Johnson and Sam Rice, veteran hurler George Mogridge, and catcher Muddy Ruel starred for Washington, with rookie manager Donie Bush guiding the club.

The 24-year-old Uhle started for Cleveland. Uhle had matured into Cleveland’s ace, leading the rotation with a 22-16 record and 4.07 ERA over 287⅓ innings and pitching a no-hitter against the Yankees the preceding season. Building on previous successes, he was 17-10 with a 3.60 ERA in 215 innings heading into the contest. Uhle had won six of his previous seven decisions though he dropped his last two starts against Washington, including a 3⅓-inning start when Cleveland’s mental lapses and sloppy fielding led to his early exit. Uhle included a fastball and overhead curve in his pitching repertoire,3 and has been credited with inventing the slider later in his career.4

Twenty-one-year-old rookie right-hander Monroe Mitchell started for Washington. Mitchell was facing Cleveland for the first time. He debuted weeks earlier against the St. Louis Browns, when he allowed four runs (one earned) during the fourth through sixth innings.5 Through his first five games, he was 1-2 with a mediocre 3.81 ERA in 26 innings.

Cleveland quickly jumped on Washington pitching as Jamieson laced a leadoff triple to the scoreboard in right-center. Homer Summa’s hit plated Jamieson with the game’s first run and gave the Indians a lead they didn’t relinquish. Mitchell recovered with a groundout, popout, and fly out, but Cleveland had snagged an early 1-0 lead. Washington’s Roger Peckinpaugh and Rice both singled and Peckinpaugh reached third base, but was stranded on a groundout.

The Indians wasted no time generating offense in the second inning. Rube Lutzke singled to right, Brower singled to center, and Steve O’Neill walked to load the bases. Starting pitcher Uhle helped his cause by plating Lutzke and Brower on a single to left field, with O’Neill taking third base. Jamieson made the inning’s first out on a fly ball that scored O’Neill. After Summa singled, Mitchell was relieved by Skipper Friday. Like Mitchell, Friday was pitching in his only major-league season; this contest was his seventh big-league appearance. Friday walked Speaker and Sewell and the bases were again jammed. Riggs Stephenson crushed a bases-clearing triple to deep left field. With Cleveland now batting around, Lutzke hit an infield single and Brower dunked a single that scored Stephenson. With runners on first and second, Rice fielded O’Neill’s shallow fly into right field and forced out Brower at second base. The Indians’ huge inning ended when Uhle grounded out. Cleveland tallied eight runs on seven hits to take a commanding 9-0 lead heading into the bottom of the second inning.

After Bucky Harris’s groundout and Ossie Bluege’s infield popout, Washington pieced together a Patsy Gharrity walk, Friday’s solid single to right, and Nemo Leibold’s hard single to right to get on the scoreboard. Peckinpaugh ended the inning with a fielder’s choice. Cleveland now led 9-1.

Cleveland’s bats paused during the third and fourth innings, the only innings the Indians didn’t score. Washington managed one runner in each inning, though neither runner advanced beyond first base.

Brower opened the fifth inning with an infield single. After a fly out and a fielder’s choice, Jamieson, in his fourth plate appearance, tripled into the right-field corner and scored Uhle. Summa also tripled and scored when Harris’s wild relay landed in the Indians’ dugout.6 Adding three runs boosted Cleveland’s lead to 12-1. Uhle struggled in the Washington half. Leibold singled but was erased when Peck hit into a double play. Then Goslin doubled to center field, Rice walked, and rookie backup catcher Pinky Hargrave’s infield single loaded the bases. However, Harris’s infield groundout ended the threat. In the Cleveland sixth, Sewell doubled to lead off and, after Friday retired two Indians, scored on Brower’s fourth hit. O’Neill walked and Brower moved into scoring position, but Uhle flied out to end the inning. The Senators were retired in order with Cleveland up, 13-1.

The third Washington pitcher, Squire Potter, entered in the seventh. He was also a rookie slabman; this game constituted his lone major-league appearance.7 Potter struggled with control from his first pitch; he started by walking Jamieson and Summa. Rookie backup first baseman Ray Knode singled home Jamieson, Knode’s first major-league RBI in his sixth game. Potter walked Sewell to pack the bases and then unleashed a wild pitch that scored Summa. Potter struck out Stephenson for the inning’s first out and then issued his fourth walk, to Lutzke. With the bases loaded, Brower doubled Knode and Sewell home. O’Neill continued the merry-go-round by singling Lutzke and Brower home, making the score an embarrassing 19-1. Both O’Neill and Uhle were mercifully caught stealing to prevent further damage. In the bottom of the inning, the Senators were dismissed on two fly outs and a groundout.

Returning in the eighth for his second inning, Potter allowed singles to Summa and Knode; Cleveland’s 20th run scored when Sewell’s fly drove in Summa. Then Stephenson singled and scored on Lutzke’s double, though Lutzke was thrown out at third. Cleveland had increased the tally to 21-1. Washington found some offense in its half: Rice hit a leadoff single to right field. After two fly outs, Bluege tripled for Washington’s second run.

Potter didn’t escape trouble in the ninth inning. Brower delivered his sixth hit, a single to right; he stole second then scored Cleveland’s final run on Uhle’s single. Jamieson followed Uhle with his fourth, and Cleveland’s 26th, hit that afternoon. After Cleveland’s bats were finished for the day, Uhle retired Washington in order to end the game and earn the complete-game 22-2 win. The score could’ve been higher, but the day was extremely hot and humid, and Cleveland “allowed themselves to be put out in several instances.”8

Brower enjoyed a career performance, setting a personal high with six hits in six at-bats; as of 2019 he was one of seven Indians to collect six hits in nine innings, and was the first AL player since 1902 to accomplish the feat.9 Jamieson and Summa banged out four hits, while Summa paced Cleveland with four runs.10 Uhle, who improved to 18-10 while allowing two runs on 10 hits, contributed to the offense with three hits, two runs, and three RBIs.

The Indians never caught the Yankees and dropped to third with an 82-71 record, a half-game behind the surging Detroit Tigers. Brower established career highs with 16 home runs, 25 doubles, a .509 slugging percentage, and (retrospectively) 3.1 Wins Above Replacement. Summa completed his first full year and remained an integral part of Cleveland’s outfield for the decade. Uhle led major-league pitchers with 44 games started and 357⅔ innings pitched, and AL pitchers with 26 wins and 30 complete games that season. He finished eighth, and was the highest-ranking pitcher, in AL MVP voting. Uhle enjoyed an outstanding career, winning 200 games and pitching regularly until 1932. Bill James listed Uhle as the 91st top pitcher in major-league history based on his slider, his ability to overcome constant injuries, and his offensive abilities.11 Meanwhile, the Senators improved during the second half, finishing fourth with a 75-78 record.12