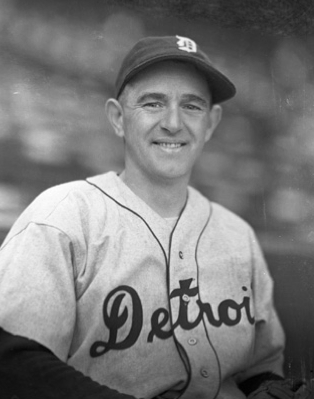 One day you will tell your grandchildren “of the glorious deeds of Homer Hank, the big Greenberg boy, of Machine Gunner Charlie Gehringer, of Fire Chief Rogell, the great hop expert, of Marvin Owen, the man with the magnetic mitts.” — Detroit Free Press, August 1, 1935

The Detroit Tigers won the 1934 American League pennant with the help of an outstanding infield: Hank Greenberg at first base, Charlie Gehringer at second, Billy Rogell at short, and Marv Owen at third. Dubbed the “Battalion of Death,” the quartet delivered offensive firepower and defended with military precision.

On August 7, 1935, the Tigers were in first place when the Chicago White Sox arrived in Detroit for a four-game series. The White Sox were a surprise in 1935: They had finished dead last the year before, but on August 7, they were in third place, eight games behind the Tigers. Moreover, they had won eight of 12 games against the defending champions.

Both teams were led by feisty playing managers, the Tigers by catcher Mickey Cochrane and the White Sox by third baseman Jimmy Dykes. Cochrane and Dykes were teammates for eight seasons on Connie Mack’s Philadelphia Athletics. Unlike the “quiet and dignified” Mack, Cochrane and Dykes were “hustling, barking, meddlesome young men with hair-trigger tempers and bruised shins,” said sportswriter John Lardner.1

The first game of the series was played on Thursday, August 8, with the temperature in the high 70s. Attendance at Navin Field was reported to be 22,000.2 Live play-by-play could be heard on radio in Michigan, from Ty Tyson on WWJ, and from former Tiger great Harry Heilmann on WXYZ.3

Detroit’s starting pitcher was Alvin “General” Crowder, a savvy 36-year-old right-hander who “relied on his pitching instincts, sliders, sinkers, and offspeed pitches.”4 Chicago’s starter was John Whitehead, a 26-year-old rookie nicknamed “Silent John” because he rarely said a word.5 The big right-hander reeled off eight consecutive victories at the start of the 1935 season but had since won only two of 11 decisions. He pitched side-arm to right-handed batters and overhand to lefties.6

The first three Chicago batters singled to start the game, and one run was quickly put on the board. With one out and men on the corners, Vern  “George” Washington stepped to the plate. Crowder was in a jam, but Washington grounded into a deft Gehringer-to-Rogell-to-Greenberg double play to end the threat.

The Detroit defense shined again in the second inning. Luke Appling led off with a fly ball to right-center field, where Tigers right fielder Pete Fox made an impressive running catch. After Dykes singled, Marv Owen fielded a hard grounder off the bat of Luke Sewell and fired to Gehringer, who relayed to Greenberg for another double play.

Greenberg led off the bottom of the second inning by lashing a double off the top of the scoreboard in left-center field; the ball “missed being a home run by less than two feet.”7 Goose Goslin drove him home with a single to right field.

The Tigers scored again in the fourth inning; Rogell doubled down the right-field line, moved to third base on Fox’s sacrifice bunt, and scored on Owen’s single to center field. The next inning, singles by Goslin and Rogell brought in two more runs. After six innings, with Detroit leading 4-1, Whitehead was relieved by Johnny Salveson, a 21-year-old right-hander.

With one out in the top of the eighth inning, Washington came to bat with the bases loaded and again grounded into a double play, this one going from Rogell-to-Gehringer-to-Greenberg. Burly Zeke Bonura attempted to break it up by diving headlong into second base, but Gehringer sidestepped him and the big man fell hard onto the bag, injuring his left shoulder.8

In the bottom of the eighth, Fox doubled off the loudspeaker at the top of the scoreboard. The hit extended his hitting streak to 15 games; he had a 29-game streak earlier in the season. He advanced to third on Owen’s sacrifice bunt, and came home on Crowder’s groundout.

The White Sox came to bat in the ninth, trailing 5-1. Appling doubled off the scoreboard to lead off and scored on Dykes’s single to center field. The General was tiring on the mound and appeared vulnerable, but he got Sewell to ground into a nifty Owen-to-Gehringer-to-Greenberg double play, the Battalion’s fourth twin killing of the game.

Pinch-hitter Jocko Conlan handcuffed Greenberg with a sharp grounder; the ball ricocheted off the big first baseman and bounded into the White Sox bullpen, allowing Conlan to take second base.9 But Greenberg grabbed Rip Radcliff’s grounder and tossed to Crowder covering first base for the third out. The final score was Tigers 5, White Sox 2.

From Charlie to Bill to Hank—

From Marv’ to Charlie to Hank,

From Bill to Charlie to Hank—

‘Twas the chant of the scorers’ song:

General, you got them to thank!

From Marv’ to Charlie to Hank!