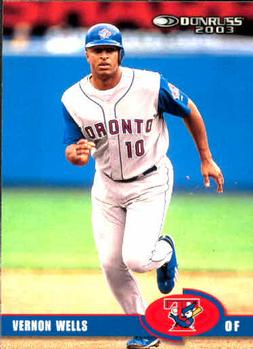 Two teams with tired bullpens arrived in Kansas City on a cool, wet spring evening for the opener of a three-game weekend series. The day before, five Toronto relievers pitched 7⅓ innings in a home loss to Tampa Bay while four Royals contributed 8⅔ relief innings in a 14-inning win at Minnesota.

Understandably, each club hoped its respective southpaw starter could pitch deep into this game. Chris George took the mound for the host Royals while 6-foot-9 rookie Mark Hendrickson toed the rubber for Toronto.

Although he was selected in every June amateur draft from 1992 to 1997, Hendrickson deferred his major-league dreams when he played college basketball at Washington State from 1992 to 1996. The Cougars’ starting power forward was named to the All-Pac-10 Conference First Team in his junior and senior seasons. At the 1996 NBA draft, after Philadelphia picked future 11-time All-Star Allen Iverson first overall, the 76ers drafted Hendrickson and another future major leaguer, Ryan Minor, in the second round.1

Hendrickson played the next four seasons in the NBA, mostly coming off the bench, and spent his summers slowly moving up in the Blue Jays’ minor-league system. When he debuted for Toronto in 2002, Hendrickson became the 12th athlete to play in both the NBA and major-league baseball.2

While Hendrickson sported a bloated 6.07 ERA in eight games for Toronto in 2003, his previous two appearances were quality starts and wins over the defending World Series champion Anaheim Angels.

After each team went down in order in the first inning, the Blue Jays opened the scoring in the second. Tom Wilson singled to right-center and moved to second on a wild pitch. After Josh Phelps walked and Frank Catalanotto struck out, Orlando Hudson drove home Wilson with a two-out line-drive single to center. George stranded the two Toronto baserunners after Chris Woodward fouled off five straight full-count pitches before finally striking out.

Despite a leadoff single by Mike Sweeney, Hendrickson needed only nine pitches to retire the home side in the second, sending George back to the mound for the third. The Kansas City hurler threw 35 pitches in his previous inning and, perhaps due to insufficient time to rest, allowed the first three Toronto batters to reach base. Leadoff man Shannon Stewart singled. Mike Bordick walked, and then Vernon Wells drove in a run with a double. Carlos Delgado lined the ball hard off George, who recovered and threw to first, but Bordick scored and Wells moved to third. Wilson hit a sacrifice fly to center to drive in the Jays’ third run of the frame.

George got two quick outs to start the fourth but Stewart lined a single to left and Bordick sent Stewart to third with an opposite-field single to right. Stewart scored when George uncorked a wild pitch on his first offering to Wells to give the visitors a 5-0 lead.

Reliever Jason Gilfillan, making his major-league debut, started the sixth for Kansas City, and Toronto took advantage of the newcomer with three straight singles off the bats of Hudson, Woodward, and Stewart to load the bases. Gilfillan struck out Bordick but then self-destructed against Wells. Like George two innings earlier, Gilfillan threw a run-scoring wild pitch on his first toss to Wells, allowing Hudson to race home. On the 2-and-1 pitch, Gilfillan threw another one in the dirt, scoring Woodward. Gilfillan’s next pitch was over the plate and Wells turned on it, belting his 11th home run of the season, a two-run shot, to make it 9-0, Toronto. Wells saw the irony in Gilfillan’s wildness costing him a grand slam. “Yeah, I thought about it. It was just a couple more runs, though. It was fun to watch. We’ve got a chance to score in every inning.”3

Meanwhile, Hendrickson pitched effectively for Toronto, scattering eight hits including three infield singles, allowing one run, which the Royals scored in his seventh and final inning pitched. “We all needed to prove something, that we weren’t as bad as we’d been showing,” Hendrickson said after the game, referring to Toronto’s substandard pitching. “Me, I just had to make a few adjustments, get back to my strengths.”4

“It’s nice to have a big lead. You want to pitch to the situation. You don’t want to get away from throwing strikes. I was pretty good with the rhythm and made them put the ball in play.”5

“[Hendrickson was] outstanding. One of the things he did tonight is pitch inside very well. It’s a thing he’s showed us he had an ability to do last year,” said Toronto manager Carlos Tosca.6

Despite an eight-run lead, the Blue Jays relentlessly attacked in the eighth inning. Kansas City reliever Albie Lopez, who pitched a scoreless seventh, yielded a leadoff double to Wells and a first-pitch single to Delgado to put runners on the corners. At some point in his appearance, Lopez pulled a groin muscle and exited the game after facing Delgado. Right-hander Sean Lowe entered and Toronto continued to tee off. Wilson lined a single to right, scoring Wells and moving Delgado to second base, and pushed the Jays’ run total into double digits. Once more a wild pitch – Kansas City’s fifth of the evening and an American League-high 25th of the season – hurt the Royals when Lowe’s 2-and-2 pitch to Phelps allowed both runners to move up 90 feet. Phelps walked on the next pitch, loading the bases, then Catalanotto cashed in two runners with a line-drive double to center. The first five Toronto batters had all reached base.

The Royals retired Hudson on a groundout for the first out of the inning, scoring Phelps while Catalanotto advanced to third. Woodward then drove home Catalanotto with a line single to left. With the score now 14-1 in favor of the Blue Jays, rookie outfielder Reed Johnson, recalled from Triple-A Syracuse that morning, pinch-hit for Stewart. Johnson doubled down the left-field line for his first big-league extra-base hit, moving Woodward to third. Bordick grounded out to second, yielding another run, then Johnson came home for his first career run when Wells, batting for the second time in the inning, lined a single to left-center. Finally, Delgado grounded out to end the inning. Eleven Toronto batters had produced seven more runs on seven hits.

Yet the visitors were not finished.

Kansas City closer Mike MacDougal entered in a mop-up role but Toronto refused to let up, adding two more runs. Phelps lined a single to center and advanced to second on a groundout, then Hudson was hit by a pitch. Woodward followed with a single to right, scoring Phelps and sending Hudson to third. With his second hit in as many innings, Johnson reached on an infield single back to the mound, bringing in Hudson with the Blue Jays’ 18th and final run of the night.

For Kansas City, this lopsided loss put an ugly exclamation point on their recent struggles. The Royals lost a franchise-worst 100 games in 2002 but had started 2003 with nine straight wins, giving their fans optimism that the team might substantially improve this season. That early-season hope was rapidly fading away; the thrashing Toronto inflicted on the Royals represented their 13th loss in the last 21 games following a 16-3 start.

The 17-run margin of victory set a Blue Jays record for winning-run differential, surpassing a 19-3 win in Yankee Stadium during Toronto’s inaugural season in 1977. Every Toronto batter contributed at least one hit and one run. Wells led the team with four hits, nine total bases, and four more runs driven in to increase his American League-leading total to 43 RBIs. Delgado was right behind him with 39 RBIs. Stewart’s three hits enabled him to join Catalanotto and Delgado as qualified American League players with a batting average better than .300 on the season.

Toronto’s offensive explosion vaulted the Blue Jays into the major-league lead for runs scored (252), an average of exactly six runs per game. However, Toronto was still two games under .500 and 7½ games behind New York in the AL East Division, largely due to allowing an almost equal number of runs (247) to opponents, the third worst mark in all of baseball.

Even so, the team’s prolific offense promised an exciting brand of baseball for the rest of the spring and summer in Toronto.

“With this lineup, once things get rolling, it’s fun to watch,” Wells said. “We’ve been swinging the bats well lately and this is just another game that we did. We put the ball in play. When you can do that consistently, hits just keep on rolling.”7

Besides the sources listed in the Notes, the author consulted Baseball-Reference.com and Retrosheet.org.

1 The undersized but tireless Iverson was part of a phenomenal 1996 draft class that also saw Kobe Bryant, Ray Allen, and Steve Nash join the NBA. Iverson was inducted into the Basketball Hall of Fame in 2016. Minor, a small forward and senior at Oklahoma, was selected by the 76ers one spot after Hendrickson but never played in the NBA. Ryan and his twin brother, Damon Minor, both eventually played major-league baseball. Ryan Minor’s third career game was his most famous. On September 20, 1998, Cal Ripken Jr. voluntarily sat out Baltimore’s final home game of the season, ending his record streak of consecutive games played at 2,632. Minor replaced him at third base.

2 baseball-almanac.com/legendary/baseball_and_basketball_players.shtml. Hendrickson is the only one of the 12 to play major-league baseball and NBA basketball in the same venue. As a member of the 76ers in 1997 and Sacramento Kings in 1998, he played against the Raptors at SkyDome in Toronto, then pitched 36 games in the same building in his major-league career.