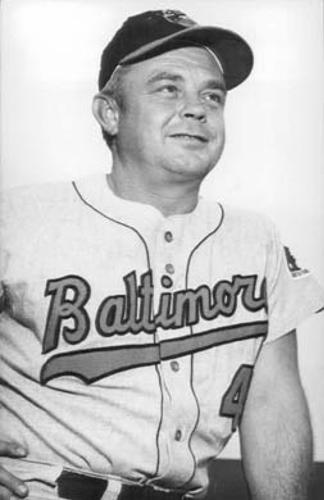 The managerial move was finally made during the All-Star break. By most accounts, it was not a surprise. Baltimore’s record in the first half of the 1968 season was 43-37, but the Orioles did not appear to be headed to the World Series. So, Orioles personnel director Harry Dalton promoted Earl Weaver to take the helm. He relieved Hank Bauer of his duties on July 10, not even two seasons after Bauer had led the Baltimore club to its first World Series title in 1966. However, the 1967 Orioles finished sixth (76-85), and Weaver “was one of three new coaches following a purge.”1 Bauer had been the O’s pilot for nearly five seasons, and as a former star with the New York Yankees, explained his firing this way: “Somebody had to be the fall guy. The Orioles are not winning because they’re not hitting, so I guess I’m to blame. But if I could still hit, I’d still be playing.”2

A small but vocal crowd of 6,499 was on hand at Baltimore’s Memorial Stadium for Weaver’s first game as skipper, and they witnessed what would become somewhat synonymous (or often expected) with Weaver-managed games − a Baltimore win and an ejection. Afterward, Weaver said, “I still feel we are a pennant contender. I don’t think first place is unrealistic, even though we are 9½ games out. I think I inherited a good ballclub. With one or two changes, I think it can be improved.”3

One of those changes involved moving Don Buford from left field to center. He was playing only his second game in center field as an Oriole, and Weaver made the move “to counter the slump of Paul Blair, which found Blair hitting only .196.”4 So, to start the second half of the season, Weaver sent Dave McNally to the mound in the night contest. The 25-year-old Baltimore southpaw had dropped his last two decisions, despite allowing only two earned runs in each game. He entered the action with an 8-8 record and a 2.23 ERA. McNally was opposed by Joe Coleman, whose 3.24 earned-run average should have provided him a better record than 5-9, but the 30-47 Senators were in last place. Coleman was coming off a complete-game victory over the Chicago White Sox.

Washington’s Cap Peterson doubled with one out in the top of the first, but he was stranded as McNally induced two ground-ball outs to Gold Glove third baseman Brooks Robinson. With two outs in the third, Del Unser singled to center. Those were the only two safeties of the game for the Senators. McNally “was coasting along on his two-hitter,”5 striking out six and issuing only two walks, en route to a shutout.

In the Orioles’ first, Buford led off with a walk. Mark Belanger singled to right, and Buford advanced to third. Buford scored as Frank Robinson grounded into a second-to-short-to-first double play. Baltimore led, 1-0.

In the fourth inning, Washington’s first-base coach, Nellie Fox (not Weaver, suprisingly), was ejected “for yelling from the bench to plate umpire John Stevens, whose checked-swing calls were being questioned.”6 Frank Howard had just struck out.

The Orioles came to bat in the bottom of the fifth still leading 1-0. Coleman had retired six in a row with three strikeouts as Buford came up with two outs. The center fielder swung at Coleman’s offering and his “homer to deep right on ‘an inside sinker or fastball’ clinched Weaver’s genius license.”7 Baltimore now led 2-0. Frank Robinson singled in the eighth inning with two outs for the Orioles’ fourth and final hit of the game. McNally had retired the final six Senators hitters, and had faced only three or four batters in each inning, with just Peterson and Ron Hansen (who walked in the fifth inning) getting as far as second base.

With the victory, Baltimore won its 10th straight game over Washington. It was McNally’s ninth victory of the season and third over the Senators, raising his lifetime record against them to 10-3. This was also the first in a 12-game win streak, as McNally went 14-2 in the second half, finishing the season with a 22-10 record and a 1.95 ERA. He was named the pitcher on The Sporting News American League All-Star Team and ended up fifth in the MVP voting for the 1968 season.

Perhaps as a sign of confidence in McNally and their new manager, the Orioles relievers went out to their left-field bullpen before the start of the game without any warm-up balls, prompting Lou Hatter of the Baltimore Sun to write, “Who needs baseballs for relief pitchers when Dave McNally pitches a stellar two-hit shut-out?”8

After this first victory, “Baltimore’s new baseball boss generally invited all visitors to help themselves to assorted tonsil coolers.”9When asked about his managing philosophy, Weaver told reporters, “I’m really a platoon man, but if somebody has a hot bat, I’m not going to take him out because a right-hander or a left-hander is pitching.”10 Buford, a switch-hitter, was not yet having the “hot bat”; he came into the game batting .234. But he went 1-for-2 with a walk and two runs scored in this contest. By August 1, he was hitting .275. Buford played 42 games in center in 1968, and he hammered out a .336 batting average and .529 slugging percentage while patrolling the middle of the outfield. He ended the season batting .282.

The Orioles went 48-34 (.585) under Weaver and finished second in the American League. This game started a 14½-year span during which Weaver guided Baltimore to six division titles, four American League pennants, and one World Series championship, with the Orioles winning more games than any other team.11

From 1968 through 1982, Weaver accumulated 85 ejections.12 If fact, it only took 19 days before he tallied his first ejection as the Baltimore skipper. On July 30, 1968, he was tossed by umpire Bill Valentine in the bottom of the eighth inning in a game against the Boston Red Sox for bench jockeying.13 Baltimore won that game, 8-3.

12 Weaver retired after the 1982 season, but was lured back to manage the Orioles during the 1985 season. He managed through 1986. In the rest of 1985 and through 1986, he was tossed another nine times, tying him for the third most career ejections (94) in the major leagues.