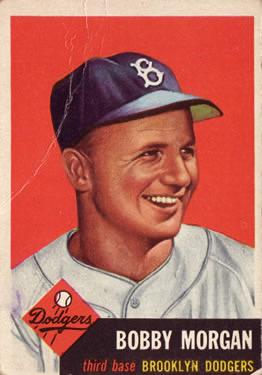 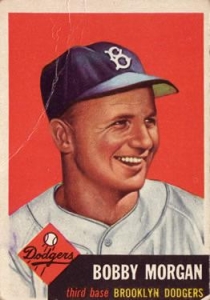 It was the Sunday afternoon before the All-Star Game break, the unofficial halfway mark in the regular season. In two days’ time, the Dodgers contingent – Gil Hodges, Roy Campanella, Jackie Robinson, Duke Snider, Carl Furillo, and Pee Wee Reese – would be at Crosley Field in Cincinnati representing Brooklyn for the National League against the American League.1 This was old hat! Hodges, Campanella, and Robinson were All-Stars for the fifth consecutive season. Snider was an All-Star four times running, and Furillo was playing in his second All-Star Game. The veteran Reese was playing in his ninth All-Star Game, a consecutive streak broken only by three years of military service.

The Dodgers (49-31) moved into first place in the National League in late June and were now two games ahead of the Milwaukee Braves. You might say that they were in the “catbird seat.”2 However, there was a game to be played today at Ebbets Field and it was against their fiercest adversary. The New York Giants were in fifth place in the National League, 5½ games behind the Dodgers, but had just beaten them in the first two games of the series to extend their winning streak to eight games. Giants pitchers Sal Maglie and Al Worthington both threw complete-game victories, limiting the Dodgers to just one run total.

The Giants sent Jim Hearn (6-5, 3.65 ERA) to the mound. Three years earlier at the All-Star Game break, the Cardinals sent Hearn to the Giants for the $10,000 waiver fee in a transaction that garnered little attention, but turned Hearn’s career around.3 His record against the Dodgers since then was even, seven wins and seven losses. Giant and Dodger fans alike remembered Hearn for his complete-game five-hitter, defeating the Dodgers, 3-1, in Game One of the 1951 National League best-of-three playoff, capping off a 17-9 record.

Carl Erskine (7-4, 5.13 ERA) started for the Dodgers. In Brooklyn, they called him “Oisk.” “They ask where I got my nickname, ‘Oisk.’ Of course, that’s a foreign language – ‘Brooklynese.’ The Brooklyn faithful pronounced Carl Erskine ‘Cal Oyskin,’ eventually shortened with yells from the very close Ebbets Field stands to ‘Hey,’Oisk, I’m witcha Babe, trow it tru his head,’ or, on a bad day, ‘Trade ’im to the Jints.’”4 Today, he was pitching against the “Jints.”

With Don Newcombe serving in the military for a second year, Erskine was clearly the leader of the Brooklyn pitching staff. His earned-run average was high, but the Dodgers bats made up for that anomaly, a .279 team batting average entering the game.5 In fact, six players with batting averages better than .300 were in the starting lineup on this day, including Erskine (.317).

The Giants got off to the early lead in the first inning. Erskine walked Alvin Dark. With two outs, Monte Irvin tripled off the right-field wall for a 1-0 lead. Over the first five innings, both teams had their scoring chances against the starting pitchers, but no other runs scored.

Hearn stranded two Dodgers runners in three of the first four innings to “snuff out”6 rallies. Billy Cox opened the first with a single to left, extending his hitting streak to 11 games. With one out, Snider doubled Cox to third. Hearn walked Hodges to load the bases, but induced Furillo to hit into an inning-ending double play. In the second inning, Robinson doubled and Rube Walker walked, but Hearn retired Erskine and Cox to end any threat. Hearn stranded two runners again in the fourth inning despite two Giants infield errors.

Meanwhile, Erskine contributed to Giant opportunities in the fourth and fifth innings with walks. Hank Thompson walked to lead off the fourth but was erased by a double play. Erskine then walked Bobby Thomson and yielded a single to Daryl Spencer before retiring Don Mueller to end the inning. In the fifth inning with one out, Erskine committed one of the cardinal sins of baseball, walking the opposing pitcher [Hearn].7 Whitey Lockman singled Hearn to second and both runners advanced when Erskine threw a wild pitch, but Thompson was retired on a fly ball to end any threat. Erskine’s luck ended on his first pitch in the sixth inning when Irvin hit his 15th home run of the season for a 2-0 lead. The Dodgers got that run back in their half of the inning when George Shuba, nicknamed “Shotgun,”8 hit one onto Bedford Avenue to cut the lead to 2-1.

Hearn’s walk to Reese in the seventh inning, after he retired pinch-hitter Wayne Belardi and Billy Cox, brought knuckleballer Hoyt Wilhelm in from the bullpen. Despite yet another infield error (Spencer’s second of the game) and a passed ball, Wilhelm retired the Dodgers without damage. The Giants added to their 2-1 lead in the eighth inning. Dark opened with an infield single off reliever Billy Loes and took third on Irvin’s line-drive single to right, his third hit of the game. Bobby Thomson’s fly to Snider at the center field wall easily scored Dark for the third Giants run.

Wilhelm retired the Dodgers in order in the eighth inning but faced some maneuvering by Dodgers manager Charlie Dressen in the ninth. Campanella pinch-hit for Rube Walker and doubled off the left-center-field wall to open the inning. Jim Gilliam pinch-hit for Loes and Campanella advanced to third on a groundout. That mattered little when Billy Cox, often the forgotten man in the star-studded Dodgers lineup, came to bat. Cox homered to left off Wilhelm, scoring Campanella and sending the game into the 10th inning. Cox was always better known for his glovework and mused over the praise he received. “They overrate my fielding and underrate my hitting,” he claimed.9

The Dodgers brought in Johnny Podres to pitch the 10th inning. Podres was being used as both a starter and reliever in his rookie season. He retired the Giants, but not before yielding Irvin’s fourth hit of the game, a single to right field. The Giants as a team had only three other hits all day.

For the Giants, Wilhelm was used to pitching long relief stints, and he pitched into the 10th inning. However, it was not a good omen. The last time he pitched on the Ebbets Field mound, May 28, it was also into the 10th inning when he yielded the winning run without a hit on a strikeout, a catcher’s error, a wild pitch, an intentional walk, and a passed ball.10

Furillo singled to center to open the Dodgers’ 10th. After Shuba struck out swinging, Robinson singled to right on a hit-and-run past the second baseman, advancing Furillo to third base. Campanella was intentionally walked to load the bases, bringing up Bobby Morgan, pinch-hitting for Podres. Morgan was a utility infielder on a star-studded team who had had only two plate appearances since June 19, both hitless. Wilhelm walked Morgan on a 3-and-1 count and Furillo crossed the plate as the winning run in the 4-3 Dodgers victory.

Now it was time for an All-Star Game in Cincinnati which would also include the Giants’ contingent – Davey Williams, Wes Westrum, and Wilhelm. Roscoe McGowen assured his readers in the New York Times that the Dodgers’ win would put their manager, Dressen, in a better mood to lead the National League team.11

When the regular season resumed, the Dodgers relentlessly pulled away to win the National League crown by 13 games over the Milwaukee Braves. A 13-game winning streak in August and Erskine’s outstanding pitching helped them achieve a 55-18 record after the All-Star break. Erskine won 13 of his last 15 decisions to become a 20-game winner (20-6, 3.54 ERA) for the first time.

The Dodgers led the major leagues with 208 home runs and the National League in many offensive categories, including batting average (.285). At season’s end, there was a stack of .300 hitters: Hodges (.302), Campanella (.312), Robinson (.329), Snider (.336), and Furillo (.344). Furillo won the NL batting crown, Campy was named National League MVP and Gilliam was named Rookie of the Year.

For the Giants, it was an offyear. They finished in fifth place in the National League, 35 games behind the Dodgers. Monte Irvin was the lone bright spot. Irvin broke his ankle in spring training the year before and saw limited action in 1952. His 1953 preseason ambition was to bat .330, hit 30 home runs, and drive in 130 runs.12 He didn’t reach his goal but nonetheless batted .329, seventh in the National League, and added 21 home runs and 97 RBIs.

There was now another shot at the New York Yankees. Biographer Arnold Rampersad called it “an almost bizarre mixture of confidence and resignation” when Jackie Robinson declared, “If we don’t win it this year, we’ll never win it.”13 In the end, the cry in Brooklyn would be “wait till next year,”14 a euphemism for a baseball season gone awry, as the Yankees won the World Series in six games.

During the 1952 season, my father took me to the Polo Grounds to see my first Dodgers vs. Giants game.15 This year, after a first visit to Ebbets Field in 1951, we returned for another installment of this intense rivalry. I have no record of which game we saw. I only recall the animated banter of two excited fans, one seated several seats away to my right and rooting for the Dodgers and the other seated several seats to my left, equally as loud and cheering for the Giants. I have picked this game to represent that most joyous experience. After all, the Dodgers won!

The author accessed Baseball-Reference.com for box scores/play-by-play information (baseball-reference.com/boxes/BRO/BRO195307120.shtml) and other data, as well as Retrosheet.org (retrosheet.org/boxesetc/1953/B07120BRO1953.htm).

2 Paul Dickson, The Dickson Baseball Dictionary, 3rd Edition (New York: W.W. Norton & Company, 2009), 166. “A position of control and mastery, often stated as sitting in the catbird seat.” The term was popularized in the 1940s by Brooklyn Dodgers announcer Red Barber, who would use it, for example, to describe a batter with a count of three balls and no strikes, or a pitcher with a big lead. The term is often used to describe a team’s first-place position in the standings.”

8 Roger Kahn, The Boys of Summer (New York: Harper and Row, 1972), 224. Roger Kahn observed that Shuba earned the nickname by “spraying line drives with a swing so compact that it appeared as natural as a smile.”

14 Dickson, 918. “A Willard Mullin cartoon (New York World-Telegram, August 9, 1939) depicted a character in a Dodgers uniform claiming that his theme song was ‘Wait Till Next Year: A Torch Ballad in One Flat’ with words and music by The Dodgers.”