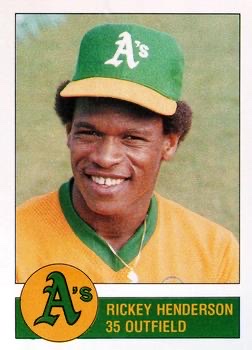 What a difference a year makes. In 1979 the California Angels were flying high, winning the AL West Division with an 88-74 record. The Oakland A’s had finished last in the AL West at 54-108.

Notwithstanding the records, in spring training Billy Martin declared that his A’s would beat the Angels and win the division. But looking at the records approaching the All-Star break, barring divine intervention, the 38-46 A’s were not winning the division. They were, however, beating the Angels (30-50) on a regular basis: The A’s had triumphed in eight of their 10 meetings so far in 1980.

Neither looked as if they’d make the postseason: The A’s were fifth in the division, 12 games behind the Kansas City Royals, and the Angels were bringing up the rear at 18 games back.1

Before the regularly scheduled game, the Angels hosted an Old Timer’s game including a number of the original players from the original 1961 team. Those included Jim Fregosi, the current Angels manager. Hopefully he realized that Gene Autry (the original Angels owner) was kidding when he suggested that the players should stick around after the regular game: “Because if Fregosi can’t win tonight, there may be a new manager.”2

Dave Lemanczyk (3-8, 5.06 ERA) took the hill for the Angels. He had been traded from the Toronto Blue Jays at the beginning of June and had finally gotten his first win in an Angels uniform in his previous outing. His average innings per start in 1980 were less than five, compared with over eight innings per start for the A’s Mike Norris (10-6, 2.54 ERA).

Lemanczyk’s outing did not start well: He walked Rickey Henderson, who immediately stole second. He was erased at third when Dwayne Murphy grounded into a 4-5-6-4-1 fielder’s choice. He stayed in the rundown long enough for Murphy to make it to second. Murphy advanced to third on Dave Revering’s groundout, but was left there when Wayne Gross grounded out as well.

After Larry Harlow lined out in the bottom of the first, Carney Lansford walked, then advanced to second on Rod Carew’s groundout. That set up the first score of the game: Don Baylor singled to left and Lansford scored, but Baylor was called out trying to take second. Fregosi came out to argue the call with umpire Dan Morrison, kicked Baylor’s batting helmet, and got tossed.3 Third-base coach Bobby Knoop was at his daughter’s wedding, so that left pitching coach Larry Sherry managing the game for the Angels.4

Lemanczyk’s second inning went more smoothly: He allowed a double to Jeff Newman and nothing else. Norris ran into some trouble in the bottom half of the frame: After Jason Thompson singled, he got two quick outs without allowing Thompson to advance. But then Freddie Patek doubled, putting runners on second and third. Norris escaped when Tom Donohue grounded out.

The A’s tied it up in the top of the third. After Jeff Cox grounded out, Henderson walked again and stole second again. He could have stayed put: Murphy walked as well. Revering singled, scoring Henderson and sending Murphy to third. Gross tried for a sacrifice fly to center but Larry Harlow threw out Murphy at the plate for the final out of the half-inning. Norris worked a 1-2-3 bottom of the third leaving the score tied, 1-1.

In the top of the fourth Lemanczyk allowed only a single to Mitchell Page. Norris was not so lucky in the home half. Thompson hit a one-out solo homer into the second deck to put the Angels ahead again. Bobby Grich hit a two-out double and advanced to third on Patek’s single. But he was left there when Donohue struck out.

Cox opened the fifth by reaching on an error by shortstop Patek, but no runner advanced beyond first: Two force outs at second and a fly out kept the score 2-1, Angels. In the bottom of the fifth, Norris also got two groundouts and a fly out for a 1-2-3 inning.

The A’s took the lead for good in the top of the sixth. Gross walked, then Tony Armas hit his 17th home run out to left, putting Oakland ahead 3-2. After that, Sherry replaced Lemanczyk with Dave LaRoche, who got the necessary three outs without putting a man on base. In the bottom of the sixth, Norris allowed two singles but got out of the inning on a 5-4-3 double play.

LaRoche continued pitching in the top of the seventh (he was frequently called on as a multiple-inning reliever). After Cox struck out, Henderson singled … and stole second. It was his third steal of the game and his league-leading 40th of the year.5 Murphy bunted,6 LaRoche got the ball – but no one covered first, so Murphy was safe and Henderson was on third.7 Revering grounded out to first, but Henderson scored and Murphy moved to second. Gross followed with a single to right, scoring Murphy. That was all for LaRoche: John Montague came in to face Armas and got a groundball to end the half-inning with the score 5-2, A’s. The Angels were unable to answer in the bottom of the frame: Donohue reached on an error, but that was all.

Page opened the eighth with a triple but the A’s were unable to capitalize. Two pop flies and a groundout left him stranded. Norris had a rocky bottom of the eighth. Carew grounded back to him, but first he had trouble getting a grip on the ball and then his throw was too low,8 so Carew ended up on second when first baseman Revering couldn’t quite corral the ball. Carew stayed put when Baylor grounded out to second but he was able to score on Thompson’s double to right field. Joe Rudi popped out to shortstop but Grich singled to right, scoring Thompson. That ended Norris’s day with the score 5-4, A’s. Norris was glad to be pulled, even though it broke his streak of six complete games.9 He admitted, “I was tired out there.”10 There was a good reason for that: The bullpen had recorded only six saves all year, and only two since May.11 Jeff Jones got Patek to fly out for the final out of the eighth.

Mark Clear pitched the ninth for the Angels. Henderson opened with a single – and did not steal second. He did get there on Revering’s single after Murphy flied out. But Clear struck out Dave McKay and induced a groundout from Armas to hold the deficit at one.

Jones continued pitching for the A’s in the bottom of the ninth. Pinch-hitter Dickie Thon grounded out, but Harlow singled to left. After Lansford grounded into a force play at second, Martin decided to bring in recently recalled Craig Minetto12 to face Carew, looking for the lefty-lefty matchup. Minetto caught Carew looking to end the game with the final score 5-4, A’s.

With the win, the Athletics were 11 games behind the Royals. That was as close as they’d get, despite their 47-34 second half. The Royals went 50-32 after the All-Star break, so the A’s finished second in the division, 14 games back. But they did beat the Angels frequently in 1980: 10 games to three, so Billy Martin was half-right.13

1 The A’s actually rallied to finish second in the AL West at 83-79, but that was 14 games back of the Royals. The Angels finished sixth at 65-95, despite All-Stars Rod Carew and Bobby Grich

5 This was only Henderson’s second year in the majors, and he was already on his way to the all-time record of 1,406 stolen bases over his 25-year career. He finished the 1980 season with 100 stolen bases, the major-league record. In 1980 he also made the first of his 10 All-Star Game appearances.

6 Murphy, in addition to his 1980 Gold Glove, ended up leading the league in sacrifice bunts with 22.

8 Fielding errors were not typical for Norris: He won a 1980 Gold Glove, as well as coming in second in the AL Cy Young Award vote.

9 That streak started on June 11 with a 14-inning complete game.

12 Hillyer. Minetto’s previous game was June 21 for the Ogden A’s of the Pacific Coast League. His 1980 stint in the majors was seven appearances over two months.

13 Under new ownership in 1981, Martin’s prognosticating was proven accurate: The A’s won their division. Due to his divorce, Charlie Finley agreed to sell the club to Walter A. Haas Jr. on August 23, 1980.