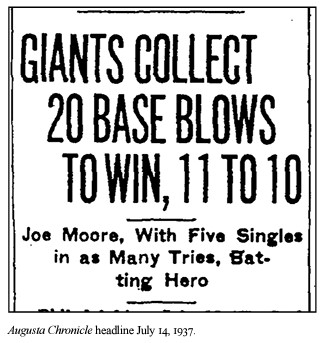 “Of course, it was ghastly. But it’s one in the old bankeroo – so wot tha heck.”2

As the temperature soared on a sultry midsummer day, the fans in Philadelphia’s Baker Bowl sat in their seats to watch the concluding inning of an apparent win against the New York Giants and a sweep of the two-game series. Their heroes had scored in each of the first four innings and had a 10-4 lead with only one inning left to play. However, the bats of the visitors got as hot as the temperature and the Giants came back with six ninth-inning runs to tie the game. An inning later, they punched across the game-winner, making their trip back home all the more pleasant. Those in attendance got to see 21 runs and 36 hits in 2 hours and 35 minutes.

New York had broken out on top in the first inning when Dick Bartell singled, advanced on a single by Jo-Jo Moore (who had five hits in the game), and came home on a single by Wally Berger. The Phillies countered in the bottom of the inning with a home run by Leo Norris off Giants starter Al Smith, a left-hander. This Al Smith, as writer Gordon Mackay noted, was not to be confused with the former governor of New York. This Smith, Mackay said, “comes not from the sidewalks of New York, but the cowpaths of Kerry Patch in St. Louis.” Mackay summarized Smith’s effort by saying “he was ripped, riddled, and hazooed in two innings for five hits and three runs.”3

Philadelphia scored a pair in the second inning. Dolph Camilli singled and took second on a bunt by Pinkey Whitney. Bill Atwood walked, and a single by George Scharein scored Camilli and moved Atwood to third. Smith struck out Claude Passeau, the Phillies’ starting pitcher, but it was downhill from there. Norris singled Atwood home for his second RBI of the game. A single by Hersh Martin loaded the bases, but Smith avoided further damage by inducing Johnny Moore to hit into a force play. The score was 3-1, Phillies, and Smith was finished for the day.

Smith was replaced by Dick Coffman in the third inning, and Coffman did not fare much better than Smith. Indeed, he did worse.

The Phillies extended their lead to 4-1 with a third-inning rally that commenced with a hit batsman (Morrie Arnovich) and a walk to Camilli. After Whitney forced Camilli at second, advancing Arnovich to third, a fly ball by Atwood brought Arnovich home with the fourth Philadelphia run.

In the top of the fourth inning, the Giants had five singles, including the third hit of the game by Jo-Jo Moore, to score three runs and tie the game. Johnny McCarthy started the rally with a single and was forced at second by Burgess Whitehead. Singles by Gus Mancuso and Coffman loaded the bases. Lou Chiozza of the Giants was given a second life when Phillies right fielder Johnny Moore dropped a foul ball. Chiozza then singled in Whitehead and the bases remained loaded. After Bartell flied out for the second out of the inning, Jo-Jo Moore singled to center field. Mancuso and Coffman scored on the play, but when Chiozza tried to score, his path to the plate was blocked by catcher Atwood, who applied the tag. In the collision at the plate, Chiozza spiked Atwood, and the players exchanged words. Chiozza was about to throw a punch but was pulled away by Passeau. Cooler heads prevailed, and the game continued.

Philadelphia regained the lead with a five-run fourth inning, all runs charged to Coffman. With two out, Martin singled past first baseman McCarthy and came home on a homer by Johnny Moore. The Philadelphia scoring continued as Arnovich singled and Camilli doubled him home. Camilli came home ahead of Whitney’s long home run to the bleachers in left field.

Tom Baker was the next Giants pitcher. He limited Philadelphia to one run over the next four innings, and that run, which came in the sixth inning, was somewhat tainted.

The Phillies in the fifth inning were frustrated in their attempt to extend their lead. Scharein singled and stole second base. But when he tried to steal third base, he was thrown out by Giants catcher Mancuso for the third out of the inning.

In the sixth inning with one out, Johnny Moore, who had homered two innings earlier, hit a ball to center field that eluded Berger and went for a triple. He came home on a single by Arnovich.

Moore’s triple was the fifth extra-base hit of the game for the Phillies, who had 16 hits in all. After the sixth inning, they had only three hits and two of those runners were eliminated on double plays. Martin’s third hit of the game, a double, came with two out in the eighth inning. He was left stranded.

Philadelphia’s Passeau took a 10-4 lead into the ninth inning. He had been in and out of trouble early in the game as the Giants stranded five batters in the first four innings. He got his act together over the next four innings, retiring the side in order twice and not allowing a runner past first base.

The ninth inning was a different story. The Giants scored six runs in their half of the ninth inning to tie Philadelphia and force extra innings. In the 10th inning, they scored a run to win.

“Jimmy Wilson has repeatedly said that his men are the greatest seven-inning ballclub in the National League, but the worst nine-inning aggregation.” – Stan Baumgartner 4

The Giants began the ninth with five consecutive singles. Jimmy Ripple, pinch-hitting for Baker, got the first one. In quick succession came singles by Chiozza, Bartell, Moore, and Berger. Passeau’s day was over and Philadelphia manager Jimmie Wilson went to his bullpen. Syl Johnson came in and the first batter he faced, Mel Ott, doubled. Out went Johnson and in came Hugh Mulcahy. Mulcahy got out of the inning, but not before allowing two inherited runners, including the tying run, to score. After retiring McCarthy on a fly ball to Johnny Moore, Mulcahy faced Sambo Leslie, pinch-hitting for Whitehead. Leslie singled across the fifth run of the inning. Then a fly ball by Harry Danning knotted the score at 10-10.

Cliff Melton pitched a scoreless bottom of the ninth for the Giants, and the game went into extra innings.

Mulcahy returned to the mound to pitch the 10th inning for Philadelphia, and Chiozza opened the inning with a double He moved to third on a bunt by Bartell. Jo-Jo Moore, with his fifth hit in six at-bats, drove in Chiozza with a single for his fourth RBI of the game. It was the last of the Giants’ 20 hits in the game.

Melton wrapped things up with a scoreless 10th and was the winning pitcher. He allowed only one hit in his two innings on the mound and gained his sixth straight win, ninth overall, against four losses. Melton, in his first season, went on to record a 20-9 record with a 2.61 ERA. Although the statistic was not kept at the time, he led the league with seven saves. He finished 11th in the MVP balloting. He never came close to matching his first-year numbers in any of his seven subsequent big-league seasons, all with the Giants. Mulcahy (3-8) took the loss. Pitching for some awful teams, Mulcahy did not win nearly as many games as he lost. In 1937 he finished with an 8-18 record. He lost 20 or more games twice in his career (1938, 1940), and gained the nickname “Losing Pitcher.”

A day after being ejected for the first time in his career after exchanging words in the ninth inning over balls and strikes with umpire Bill Klem, Giants manager Bill Terry was all smiles as his team escaped Philadelphia with a split in the two-game series. Their record was 46-29 and they had pulled to within a half-game of the league-leading Cubs, who did not play on July 13.

Terry was in his fifth full season as the Giants’ manager. In each of those seasons, beginning in 1933, the Giants won at least 90 games. In 1933 Terry’s Giants had won the World Series against Washington. In 1937 they went on to win the National League pennant but lost to the Yankees in the World Series for the second time in as many years.

The Phillies on the other hand had their escape from the cellar stalled. With a win, they could have been in a seventh-place tie with Cincinnati. They were 29-46 and on the way to their fifth consecutive season with a record below .500. They won enough games over the balance of the season to finish in seventh place with a 61-92 record, 5½ games ahead of Cincinnati.

In addition to Baseball-Reference.com, Retrosheet.org, and the sources cited in the Notes, the author used: