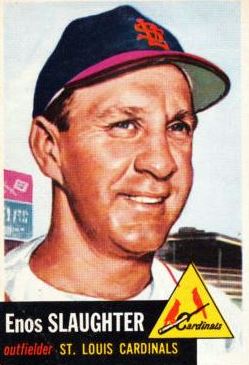 Manager Casey Stengel was back at the helm for the fourth consecutive season as the American League took on the National League in the 1953 All-Star Game at Cincinnati’s Crosley Field. Stengel’s Yankees had won their fourth consecutive World Series the prior October, and his star young center fielder, Mickey Mantle, was elected by the fans to start the game. Mantle had injured his left leg two weeks before the game, and was questionable up until game time. He did play, but could do no better than a walk in three plate appearances.

The announced crowd of 30,846 saw National League pitchers dominate the American League sluggers. The home folks had voted early and often and the Reds were represented in center field by Gus Bell and at first base by Ted Kluszewski. Big Klu, named to his first All-Star team, led all players with 1,652,803 votes. In all, 4,403,338 ballots were counted. The American League was without one of its foremost sluggers. Ted Williams was on the bench in street clothes. He was on leave from service with the US Marines in the Korean War (returning home to have an ear infection checked out), and threw out the ceremonial first pitch. (Williams’s ear ailment was such that he was discharged from the Marines on July 28 and returned to left field at Fenway shortly thereafter.)

Philadelphia Phillies ace Robin Roberts was named the National League starter by manager Chuck Dressen and allowed only one hit in three scoreless innings, a two-out single by Gus Zernial in the top of the second inning. The only other batter to reach off Roberts, Billy Goodman, was thrown out trying to steal after leading off the game with a walk. It was the fourth All-Star Game appearance for Roberts, who had led the National League in wins with 28 in 1952 and finished second in the MVP balloting.

Billy Pierce, in his first All-Star Game appearance, was the American League starter. He had been the only lefty hurler chosen by Stengel for his staff. The Chicago White Sox ace matched Roberts through his three innings, allowing only a two-out single by Stan Musial in the first inning. Musial, appearing in his 10th All-Star Game, would be one of three National League players with two hits in the contest.

The game’s scoring drought, the longest in All-Star history, continued into the fifth inning.

Allie Reynolds of the Yankees had replaced Piece in the fourth inning, and the Chief set the National League down in order in his first inning of work. With one out in the fifth inning, Reynolds, with the count at 2-and-2, threw a pitch inside to Eddie Matthews of the Braves that umpire Bill McKinley said struck the Milwaukee third baseman on the foot. Manager Stengel and his battery of Reynolds and catcher Yogi Berra argued, to no avail, that Matthews had not been hit by the pitch. Reynolds induced Gus Bell to pop out for the second out of the inning, but walked Enos Slaughter. Milwaukee’s Warren Spahn, who had pitched scoreless fourth and fifth innings, was due up, but Dressen called on Philadelphia’s Richie Ashburn to pinch-hit. Ashburn hit a ball up the middle with just enough power to clear the infield for a single that scored Matthews.

That brought up Brooklyn’s Pee Wee Reese. Reese had been the poster boy for All-Star Game futility. He had gone 0-for-13 in his first eight All-Star Games and had extended his hitless streak to 15 at-bats by going 0-for-2 in this game. He had been the first and last victim of Pierce, who got him to ground out in the first and third innings. Against Reynolds, and with his mother having come from Louisville to see Pee Wee for the first time in All-Star Game competition, Reese rifled a single to right field to score Slaughter.1

The two fifth-inning runs were all the National League needed. But then the game became a showcase for 37-year-old Enos “Country” Slaughter of the Cardinals, appearing in his 10th All-Star Game. One of three Cardinals elected to start the game (along with Musial and Red Schoendienst), he was stationed in right field. Starting the top of the sixth inning, Stengel inserted Detroit’s Harvey Kuenn as a pinch-hitter for Reynolds. Facing lefty Curt Simmons of the Phillies, the right-handed Kuenn sent a line drive to the opposite field between Slaughter and the foul line. Slaughter gave chase and extended his body, sliding along the green turf to make the catch and hold the ball aloft for umpire Bill Engeln to see. As San Francisco Examiner columnist Curley Grieve noted, “Engeln’s hand swept up in dramatic fashion and the crowd screamed in delight.”2

The National League threatened to score again in the sixth as reliever Mike Garcia gave up singles to Musial and Kluszewski but settled down to get the next three batters. Then in the seventh the NL extended its lead to 3-0, victimizing Garcia. Slaughter, off his fielding gem in the sixth inning, singled with one out, beating out a roller to shortstop. He raced his way into scoring position by stealing second base and once again was driven in by Reese. This time, the Dodgers captain doubled to the gap in left-center field.

Stengel called on the ageless Satchel Paige to pitch the eighth inning. Paige’s best years were behind him and he was named to the team despite a 1-6 record. By this point his strength was as a relief pitcher and he had recorded nine saves for the lowly St. Louis Browns. Paige gave up a single to Roy Campanella with one out and retired Matthews for the innings second out. Campanella’s hit was his first in All-Star competition. He had been 0-for-16 prior to coming through.

Then the proverbial roof fell in. Paige walked pinch-hitter Duke Snider, and Slaughter strode to the plate. In the battle of the ageless wonders, Slaughter emerged victorious, hitting his second single of the game. The hit to center field scored Campanella and sent Snider to third base. Murry Dickson, who had pitched a perfect eighth inning, came to bat and singled to center field, scoring Snider. Dickson was thrown out at second when the throw home was cut off by third baseman Al Rosen and relayed to second baseman Nelson Fox.

Through eight innings the National League pitching quartet of Roberts, Spahn, Simmons, and Dickson had held the opposition to two singles and had allowed only one runner beyond second base. In the seventh inning, Minnie Miñoso had singled with two outs, sending Billy Hunter to third, but the rally ended on a fly ball by Berra.

The American League finally broke through in the ninth inning. Reigning AL batting champion Ferris Fain led off the inning with a single and advanced to second on a single by the Yankees’ Johnny Mize, batting for Hank Bauer in one of manager Stengel’s fabled lefty/righty switches. That brought Cleveland’s Larry Doby to the plate and he stroked a Dickson offering to the deepest part of the ballpark, dead center field. “That ball should have been a home run,” said Stengel, “but the wind got hold of it and brought it back.”3 Fain advanced to third after the catch and, after Al Rosen popped to first base for the second out, scored on a single to center by Miñoso. That brought up Berra with two out. Dickson got Berra to pop out to second baseman Davey Williams for the game’s final out.

The 5-1 National League win was noticeable for its lack of fireworks; there were no All-Star Game homers for the first time since 1944. The only extra-base hit of the game was the seventh-inning double by Reese. The hardest-hit balls of the game, a seventh-inning clout by Brooklyn’s Gil Hodges and the ninth-inning smash by Doby, were loud outs.

Spahn was credited with the win and Reynolds took the loss as the National League with its fourth consecutive All-Star Game win cut the American League’s advantage in these contests to 12-8.

In addition to Baseball-Reference.com, and the sources cited in the Notes, the author used the following: