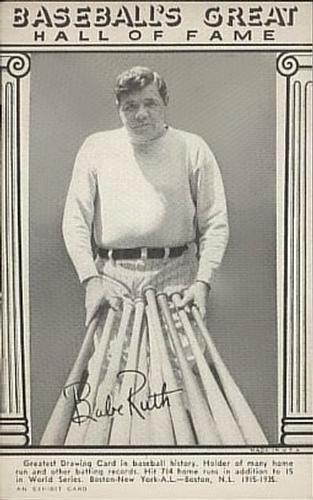 It was a “mastodonic thrust,” according to the New York Times.1 With his mighty stroke of the bat, the Yankees’ Babe Ruth smashed a towering shot that sailed over the right-center-field bleachers in Sportsman’s Park in St. Louis. It was the Sultan of Swat’s 35th home run of the 1921 season and newspapers from around the country excitedly compared his home-run pace to the previous season, when Ruth belted 54 round-trippers, more than each of the other seven AL teams, in his first season with the New York Yankees. Conspicuously absent from accounts of Ruth’s home run in the Gateway City was a more important milestone: It tied the major-league record for most career round-trippers in big-league history.

Babe Ruth’s assault on home-run records began in 1919 when the former two-time 20-game-winning southpaw pitcher reduced his pitching load (166⅓ innings) to start 106 games in the outfield for the Boston Red Sox. That season he belted 29 round-trippers to break the Chicago Cubs’ Ed Williamson’s 35-year old record of 27, set in 1884. Sold to the Yankees a day after Christmas in 1919, Ruth with his prodigious power redefined baseball and signaled the end of the Deadball Era. In the second game of a twin bill on September 24, 1920, the Bambino walloped the 100th home run in his career, becoming the 11th big leaguer to reach the century mark. The leader in home runs with 138 was Roger Connor, described by SABR’s Bill Lamb as “baseball’s first great slugger,” but who was also “[u]nderappreciated in his late-19th-century heyday and largely forgotten for decades thereafter.”2 For 25 years, beginning in 1895, Connor held the record, until the Babe’s ascent as the most transformative figure in baseball history.

The Yankees and Browns were well-rested as they headed to Sportsman’s Park on St. Louis’s north side to conclude a series on Friday, July 15, as rain had canceled the previous day’s game. Skipper Miller Huggins’s second-place Yankees (49-31), on the second stop of a 15-game, four-city road swing, had pennant aspirations and were trailing the Cleveland Indians by three games. Manager Lee Fohl’s sixth-place Brownies (35-47) were reeling, having lost nine of their last 13 contests and were in the middle of a 26-game homestand.

Toeing the rubber for each team was a young, relatively untried right-hander. The Browns’ 25-year-old Elam Vangilder, with a 7-11 career slate (3-3 thus far in 1921), faced off against Brooklyn native Waite Hoyt. The much-ballyhooed 21-year-old, known as the “School Boy,” had struggled since he debuted in 1918 and was playing for his third big-league team. His 9-7 slate in his first campaign for the Yankees evened his career record, 19-19.

On a gorgeous afternoon with temperatures rising to the high 80s, about 10,000 spectators, according to the St. Louis Star and Times, piled into Sportsman’s Park for a respite with the national pastime and a special celebration.3 Browns star and fan favorite Jack Tobin was honored in a pregame ceremony. The right fielder, who had collected 202 hits in 1920 (the first of four straight seasons with at least 200 safeties) and batted .341, was presented a luxurious Essex automobile and then driven around the park and along the outfield wall.4

The Browns got on the board first, aided by a fluke hit. Ken Williams led off the second with a double. According to the Star and Times, the next batter, Baby Doll Jacobson, tried to avoid a wild pitch by Hoyt, but the ball hit his bat and “trickled” down the right-field line, through first baseman Wally Pipp’s legs for an error.5 Williams scored easily and Jacobson reached second, where he was stranded.

Easily the major leagues’ highest-scoring team, the Yankees tied the game in the fourth and took the lead the following inning. Hoyt’s single drove in Pipp, who had led off with a double, for the Yankees first tally. In the fifth, Roger Peckinpaugh led off with a double followed by Ruth’s walk, which elicited a round of boos directed at their own hurler, noted the Star and Times.6 After Home Run Baker sacrificed both runners up a station, Bob Meusel slapped a Texas Leaguer into shallow right to drive in a run. Praised by the Times as the “altitudinous guardian of the primary corner,” Pipp followed with his second two-bagger, driving in both Ruth and Meusel, but he was cut down trying to stretch the hit into a triple.7

The Yankees’ juggernaut against Vangilder continued in the sixth. Peckinpaugh lined a two-out single to left to drive in Wally Schang, who had led off the frame with a walk. To the plate stepped hot-hitting Ruth, who entered the game with 10 home runs in his previous 62 at-bats in 17 games. For the season thus far, the Bambino’s stat line (.372/34/87) looked like something from a computer game almost a century later; his slugging (.860) and on-base-percentage (.508) were even more awe-inspiring. Ruth sent the crowd into a euphoric frenzy by clouting a deep blast, which was “still climbing when it went out of the park,” noted the Times, as it sailed over the wall and onto Grand Avenue.8 Ruth’s clout, continued the paper, was one of the longest he had ever hit in the park and it “crashed into a lamp post and demolished it.”9 Relievers Bill Bayne and Bugs Bennett hurled the final three frames for the Browns, permitting just one hit.

While the Yankees pounded the Browns, Hoyt set down the Brownies with ease. The brazen youngster “palmed fast ones that blinded them, curves that fooled them and slow ones that made fools of them,” gushed the Times.10 After holding the Browns hitless from the fourth through eighth innings, Hoyt yielded his sixth and last hit of the game, a leadoff single by Frank Ellerbe in the ninth. Baker’s wild throw on George Sisler’s grounder sailed over Pipp’s head, giving the Browns another run. It was the Yankees’ third error of the game. Sisler eventually scored on Jacobson’s sacrifice fly; all three Browns runs were unearned. Hoyt completed the game in 2 hours and 33 minutes by retiring Pat Collins to give the Yankees a 7-3 victory.

A few hours after the game, the Yankees were in a Pullman coach on their way to the Motor City for a quartet of games with the Detroit Tigers. In the third of those contests, on July 18, Ruth hit his 36th home run of the season and passed Connor to become the major-league leader in career home runs with 139. For the next 14 seasons, Ruth added to his home-run record, retiring with 714 after the 1935 season.

5 Ibid. The game account from the Star and Times provides a play-by-play account of the game. Neither BaseballReference.com nor Retrosheet has play-by-play information.