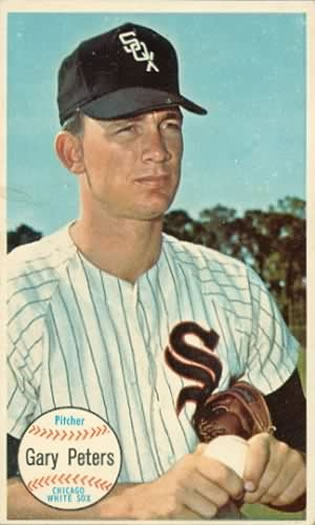 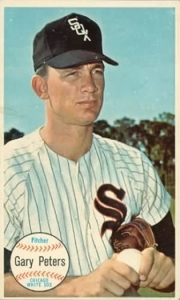 It took five major-league seasons for Gary Peters to have a breakout year in his career; but when he finally did, he made the most of it by winning Rookie of the Year honors in the American League. One of the first games that propelled him into the spotlight was a 13-strikeout one-hitter, a near-perfect game, against the Baltimore Orioles on July 15, 1963.

Peters was originally signed by the White Sox organization as a 19-year-old outfielder in 1956. By 1959 he made his major-league debut as a pitcher with the White Sox. He pitched well enough in the minors to earn a late-season call-up to the big-league club for the next two seasons, before he was able to land a spot on the major-league roster coming out of spring training in 1962. He didn’t stick with the White Sox that time, pitching in only five games before being sent back to Triple-A Indianapolis for the rest of the season.

The 26-year-old left-hander started the 1963 campaign with the White Sox in a relief role and finally got his first start of the season in an emergency situation on May 6. He was still making relief appearances between sporadic starts. A month later, though, Chicago manager Al Lopez had Peters taking regular turns in the starting rotation. He had a 6-5 record and 2.59 ERA before the game on July 15.

The White Sox, Minnesota Twins, Baltimore Orioles, and Boston Red Sox were locked in a tight race for second place behind the New York Yankees. Only three games in the loss column separated the four teams.

Orioles manager Billy Hitchcock started veteran Robin Roberts, the 36-year-old right-hander with 244 career wins under his belt before the 1963 season. Despite winning four consecutive decisions in May, Roberts had only a 6-8 record coming into the game.

In a night game before 17,764 spectators in Comiskey Park, both teams initially had trouble getting runners on base. Peters yielded a single to Roberts in the bottom of the third, while Roberts gave up three hits through four innings.

It wasn’t until the bottom of the fifth inning that any runs were put on the board. The White Sox scored twice on a walk to Ron Hansen followed by a home run into the lower right-field seats by J.C. Martin.

Going into the sixth inning, Peters was locked in on the mound, having struck out seven and yielded just Roberts’ hit. The score remained 2-0 until the bottom of the eighth inning, when rookie Tom McCraw hit his third homer of the season, into the right-center-field stands with rookie Pete Ward on base. McCraw had been brought up to the team about five weeks before to replace injured first baseman Joe Cunningham. Hansen and Martin singled, but George Brunet, who relieved Roberts, retired the side by getting Peters to fly out, leaving the score 4-0.

Peters continued to maintain his control and struck out two more Orioles in the ninth to claim the victory. He faced only one batter above the minimum, and struck out 13. He had a three-ball count on only three batters: Bob Johnson in the first inning, Al Smith in the seventh, and John Orsino in the eighth. Only two fly outs were made by White Sox outfielders.1

Roberts took his ninth loss of the season, giving up four earned runs on 10 hits and two walks in 7⅔ innings pitched. He pitched three more seasons before retiring in 1966 with 286 career wins and a 3.41 ERA. He was elected to the National Baseball Hall of Fame in 1976.

After the game, Peters remarked about Roberts’s hit, which came on a high fastball smacked up the middle that ruined his work of art. “I knew he was a good hitter. … I was trying to get ahead of him, but got the ball too high. Had I succeeded, I would have come in with breaking stuff,” Peters said.2 White Sox second baseman Nellie Fox joked with his teammate in the clubhouse, “I fouled up your no-hitter. I wasn’t playing Roberts right.”3

Lopez commented, “The kid hasn’t pitched a bad game all year. As I recall, he lost two of his five games in relief. What makes him good? His fastball tails off. He’s got a good slider. Ten of those 13 strikeouts were against right-handers.

Rival manager Hitchcock praised Peters’ performance as “terrific, the best-pitched game against us all season.” This compliment came after his team had previously defeated left-handed pitchers 20 times during the season.4

From July 11 to August 29, Peters had a streak of 11 consecutive winning decisions during which he posted an ERA of 1.15 and his opponents had a slash line of .181/.234/.228. He finished the season with a 19-8 record and a league-leading 2.23 ERA. In a retrospective application of advanced metrics, Peters led the league with 150 ERA+ and 2.34 Fielding Independent Pitching (FIP). Peters was voted the AL Rookie of the Year over teammate Pete Ward, who also had a fine season with 22 home runs, 84 RBIs, and a .295 batting average.

Peters’ 11-game winning streak set a new rookie record for AL pitchers. It broke the record set in 1926 by Philadelphia A’s pitcher Joe Pate and tied by Whitey Ford of the New York Yankees in 1950. The modern major-league record of 12 games was set by George “Hooks” Wiltse of the 1904 New York Giants.6

Peters’ outstanding pitching in the second half of the season helped the White Sox get separation in the AL standings from the Twins, Orioles, and Red Sox, but they still finished in second place behind the Yankees by 10½ games.