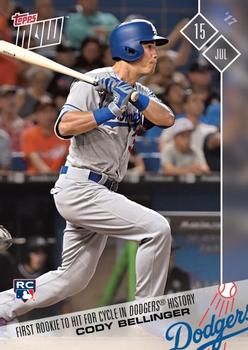 The second week of July must have seemed like a blur to LA Dodgers rookie Cody Bellinger. On Monday, July 10, the night before the All-Star Game, he was slugging his way through the Home Run Derby, reaching the semifinals after driving 27 dingers over the fence in the first two rounds. On Tuesday, July 11, he played in his first All Star Game, taking over for Bryce Harper in right field and getting three at-bats (where he was hitless with one strikeout). He became “the youngest position player to ever represent the L.A. Dodgers in an All-Star Game.”1 On Thursday, July 13, he celebrated his 22nd birthday. And on Saturday, July 15, Cody Bellinger hit for the cycle, becoming the 10th Dodgers player and the franchise’s first rookie to accomplish that rare feat.2 Bellinger capped a great week by going 4-for-5 with two runs scored and three driven in. (He would go on to be named the NL Rookie of the Year.)

On the 15th, the Dodgers were playing the Miami Marlins in the second game of the season’s second half. Los Angeles manager Dave Roberts sent Alex Wood to the mound, in search of his 11th win of the season. Wood was trying to become the first Dodgers pitcher in modern history to start a season with a record of 11-0.3 Miami countered with Jose Urena to break the streak. A crowd of 22,609 was on hand at Marlins Park.

Bellinger had been up and down the Dodgers lineup, batting in every position, until June 13, when Roberts penciled the lefty into the cleanup spot. With very few exceptions, he stayed there for the rest of the season.

In the top of the first, with two outs and Corey Seager on first after a walk, cleanup batter Bellinger grounded Urena’s first pitch up the middle for a single. However, he and Seager were stranded as Logan Forsythe flied out to deep center to end the inning.

Two innings later in the scoreless game, Chris Taylor and Seager reached on back-to-back singles. Urena was presented with a pitcher’s best friend, getting Justin Turner to ground into a 5-4-3 double play, with Taylor moving to third base. But then Urena threw a 1-and-1 slider to Bellinger, who launched a 406-foot home run,4 his 26th of the season. That mark tied him with Miami’s Giancarlo Stanton and Cincinnati’s Joey Votto for the league lead. It also seemed to rattle Urena, who walked the next batter, Forsythe, and then gave up a single to Joc Pederson. Yasmani Grandal took a pitch for a ball before depositing Urena’s next offering into the right-field seats. The Dodgers had scored five runs, all with two outs. Urena then walked Yasiel Puig, who moved to second on a wild pitch with Wood in the batter’s box. It was evident that Urena was struggling, as his mound opponent Wood had an eight-pitch at-bat, finally striking out looking.

In the bottom of the third, Wood needed only 11 pitches to retire the Marlins, and then the Dodgers pounced again in the top of the fourth. Drew Steckenrider was now on the hill for Miami, and he struck out Taylor and Seager, but Turner walked on five pitches, bringing Bellinger back to the plate. He drove a liner to the wall in right center for a double, bringing in Turner with LA’s sixth run of the game. Bellinger advanced to third base on the throw home. Forsythe struck out, but the Dodgers had increased their lead to 6-0.

Steckenrider and Junichi Tazawa kept the Dodgers scoreless in the next two innings. Leading off the Los Angeles seventh, Bellinger was a triple shy of the cycle. Nick Wittgren, Miami’s fourth hurler, threw only one pitch to Bellinger, who stroked “a gapper that got past Marlins right fielder Giancarlo Stanton and rolled to the wall.”5 Bellinger legged out the 270-foot three-bagger, and after the game told reporters, “I knew I hit it well. I looked up, thought he was going to catch it. Then I saw him overrun it, and that’s when I thought I had a chance for it.”6 Bellinger is considered the fastest man on the roster, and he slid into the bag, “even though it wasn’t necessary.”7 He had just become the first Dodgers rookie to hit for the cycle. Forsythe followed with a shot to right field that Stanton did catch, but it was deep enough for a sacrifice fly, bringing Bellinger home with run number seven.

Wood cruised through his six innings of work, never facing more than four Marlins hitters in any inning. Pedro Baez came on to pitch the seventh for Los Angeles, and after retiring Marcell Ozuna and Martin Prado, Baez gave up three straight hits — a double to Justin Bour, a single to J.T. Realmuto, and a two-RBI single to JT Riddle. That was all the scoring the fans would see. Brock Stewart pitched the last two innings for the Dodgers, and although he allowed three Miami hitters to reach base, none scored. Bellinger did get to bat in the top of the ninth, but he grounded out to the second baseman, Derek Dietrich. No matter; he had put together a 4-for-5 display for the fans in hitting for the cycle.

Los Angeles won for the eighth consecutive time, improving its record to 63-29. Wood’s performance put his team a league-best 34 games above .500, and he became just the third National League pitcher since expansion in 1961 to win his first 11 decisions of the season.8 (Wood was blasted by the Atlanta Braves in his next outing on July 21, yielding nine runs — seven earned — and was charged with his first loss of the season.) Urena took the loss, his record dropping to 7-4. Six Miami pitchers participated in the game, yielding 12 hits and giving up six bases on balls. The Dodgers left nine runners on base.

With the offensive outburst, Bellinger raised his batting average to .271. This was the first four-hit game of his young career. He told reporters, “I guess I just took advantage of hittable pitches. I’ve been missing them lately, so I’m glad I was able to put good swings on them today.”9

Roberts had nothing but praise for his rookie, saying, “Every time he steps on the field, something special can happen.”10 Bellinger summed it up best with, “This past week is probably the top of everything, with starting here in Miami at the Home Run Derby and the All-Star Game. It’s definitely something I’ll never forget.”11