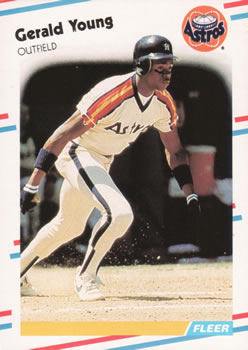 Rain, thunderstorms, and a blistering heat index of 102.9 degrees did not diminish the anticipation of Astros fans longing for the second half of the 1987 baseball campaign to get under way. On July 16, 1987, a hot and muggy night in Houston,1 an eager crowd of 19,614 made its way into the cool, climate-controlled environment of the Astrodome to watch the Astros face off against the Philadelphia Phillies. The series was important for both clubs because each had failed to play up to its potential during the first half of the season. Both teams hoped to jump out to a fast start after the All-Star break in order to gain momentum that might lead to a chance to play in the postseason.

The Philadelphia Phillies, who were 42-44, came to Houston looking for any type of boost to help salvage a disappointing season. Picked by some to overtake the New York Mets in the National League East, the Phillies had struggled to put wins together in the early part of the season2 and entered the All-Star break having lost three out of their last four games against the struggling Atlanta Braves. They entered the second half of the season in fifth place, 14 games behind the division-leading St. Louis Cardinals.

The Astros, with a record of 44-43, were 2½ games behind the division-leading Cincinnati Reds in the National League West. They sputtered into the series with the Phillies as losers of five of their previous six games, but they now hoped to repeat what they had done in the second half of the 1986 season when they went 49-25 won the division going away.3 Catcher Alan Ashby described the team’s problem for the first half of the 1987 season: “For some reason, we haven’t been doing the little things it takes to win a division. … Maybe it’s going to take something like [shortstop] Craig Reynolds going out on the mound and getting bombed [in the first game after the break in 1986]. … That game really seemed to get us going last year.”4

The Astros, looking for anything that might change their bad fortunes on the field, made some changes before the Phillies series even started. Slugger Glenn Davis and relief pitcher Charlie Kerfeld showed up with new hairstyles. Both players, according to Houston Chronicle writer Eddie Sefko, looked like members of a rock band.5

On June 19 the Astros had traded veteran third baseman Phil Garner to the Los Angeles Dodgers.6 Garner’s departure left a hole at third that the club filled by promoting Ken Caminiti, a powerful switch-hitting youngster, from its Double-A team at Columbus (Southern League). Caminiti led Columbus with 15 home runs and 69 RBIs at the time of his call-up but was surprised to make it to the big-league squad: “I thought I was going to Tucson. Then they asked me if I could get to Houston today and I told them I could leave right then.”7 The Astros inserted Caminiti into the starting lineup immediately in the hope that he could provide a spark. Caminiti did not let the club down.

The Astros’ hopes of getting the series off to a hot start took a slight hit on the day of the first game when scheduled starter Nolan Ryan injured his foot. “I was walking along the property when I stepped in a hole,” said Ryan, whose 4-10 record was misleading. (His ERA was 3.17 and he had struck out 143 in 110⅔ innings.) The veteran flamethrower made light of the injury: “I guess it goes right along with the type of year I’m having.”8

With the “Ryan Express” unavailable to start, the Astros turned to the “Bonham Bullet,” right-hander Danny Darwin, to face off against Kevin Gross for the Phillies. Darwin had come to the Astros in 1986 primarily as a starter. During the first half of the 1987 season, the Astros used him as a starter and occasional reliever. In 20 games he had amassed116 innings, a 5-6 record, and a 3.71 ERA.

Gross had spent his entire career with the Phillies since being drafted by the club in 1981 and made his major-league debut on June 25, 1983. Heading into the series with the Astros, Gross had a 6-8 record with a 4.41 ERA in 104 innings (17 starts). Although the numbers for both pitchers were unspectacular, each proved highly effective on this night.

Darwin and Gross made it through the first few innings unscathed. The Phillies’ first shot at getting on the scoreboard came in the top of the second when Darwin hit Chris James and walked Luis Aguayo. The rally quickly ended when Gross grounded to third. The Astros did not fare much better off Gross during the first few innings. They loaded the bases with two outs in the first but came up empty. Their other serious threat came in the bottom of the fifth when Caminiti barely missed a home run in his second major-league at-bat. The ball bounced off the right-field wall and by the time Phillies right fielder Glenn Wilson got the ball back into the infield, Caminiti stood at third with his first major-league hit. The Astros failed to capitalize, though, as Craig Reynolds grounded out to first and, after a walk to Darwin, rookie Gerald Young lined into a double play.

The first run of the game came off Darwin in the top of the sixth when Juan Samuel singled and scored from third on a double-play ball hit by Von Hayes. After Samuel’s hit, Darwin dominated the Phillies hitters the rest of the night, allowing only a single by Lance Parrish and a walk to Hayes.9

Though Darwin pitched nine innings and gave up just one run on four hits, the night belonged to the two Astros rookies, Young and Caminiti. Caminiti quickly won the crowd over with his defensive prowess when he made an off-balance throw to retire Hayes in the first, and an acrobatic catch on a line drive off the bat of Parrish in the second. “He saved a couple of runs right there,” Astros manager Hal Lanier said.10 By the time Caminiti came to the plate in the seventh inning, he was already a fan favorite. The rookie responded to the crowd by launching a long home run to center off Gross to tie the game, 1-1. The Astros faithful demanded a curtain call from the young slugger after he circled the bases, and his teammates forced him to comply. “They pushed me out of the dugout,” said Caminiti. “They don’t give curtain calls in Columbus. There’s usually only about 100 to 150 people there.”11

The coup de grâce for the two rookies came in the ninth inning. Young made two game-saving catches in center field in the top of the inning to keep the game tied. Caminiti walked with one out, went to third on a single by Craig Reynolds, and scored the game-winning run when Young delivered a single off Phillies reliever Michael Jackson. “You Gotta Like These Kids,” proclaimed the Astrodome scoreboard throughout the night.12 Certainly Young and Caminiti gave Astros fans reason to feel optimistic about the future.