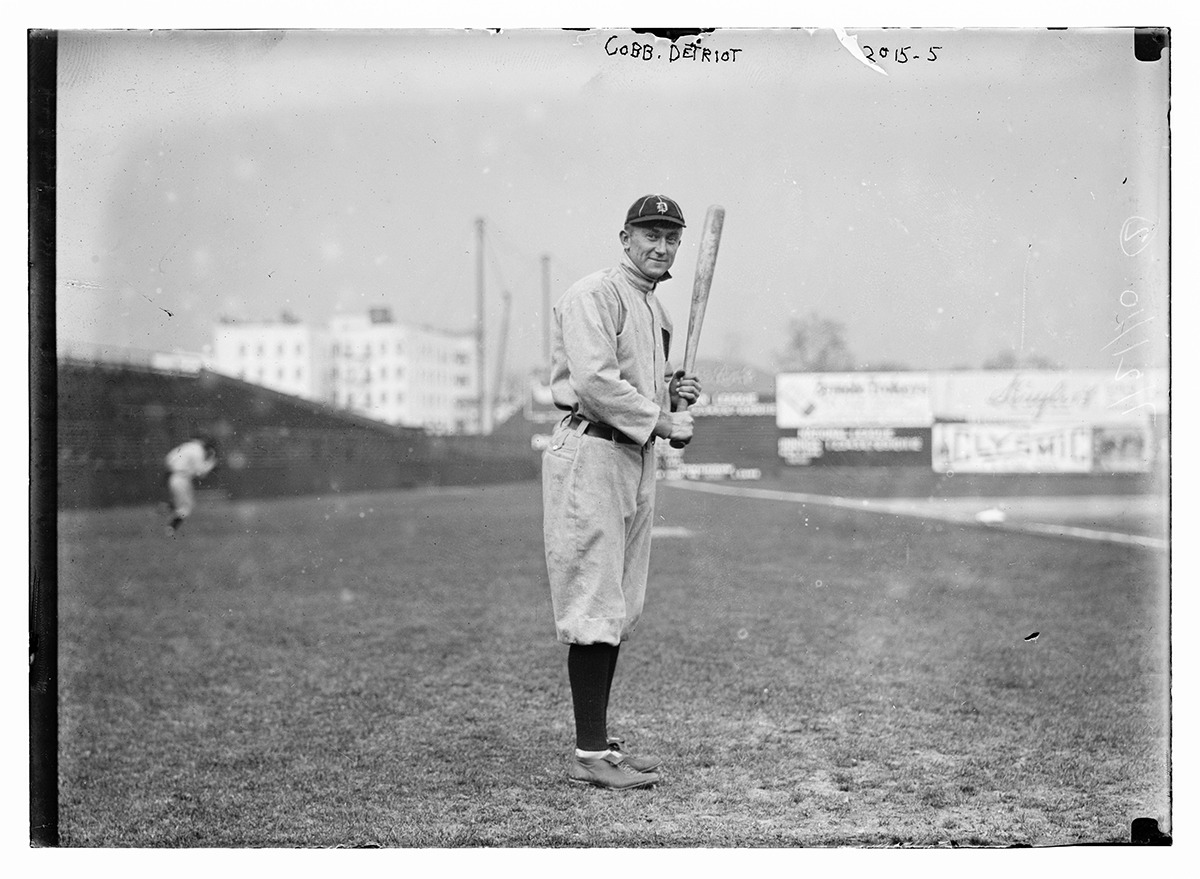 The year 1908 in baseball gave us the invention of the electric scoreboard, the introduction to the public of Take Me Out to the Ball Game and Fred Merkle’s infamous “boner.”

And on Friday, July 17, the game between the Detroit Tigers and Philadelphia Athletics provided four American League record-setting performances. In 2¼ hours’ work, the Tigers registered top team performances of 1908 in hits (27), doubles (9), RBIs (18), and runs (21).

Managed by Hughie Jennings, Detroit entered its 81st contest of the season with a 47-33 record, in first place in the American League. The Athletics, meanwhile, were 39-38 at the start of the game, in fifth place.

“Not since 1899 has a big league baseball club scored a holocaust like that,” wrote Paul H. Bruske for the Detroit Times, calling the Tigers’ 21-2 win over the A’s “a spanking such as has never before been chronicled in the American League archives.”1

The hometown Philadelphia Inquirer likewise labeled the contest a “one-sided swatfest,” and “hades on toast” for the Athletics and their well-wishers. “The Detroiters would have collided with the ball if it had been hurled from the mouth of a Gatling gun,” was another Inquirer description of the Tigers success at the plate.2

Sitting in a half-full Columbia Park in Philly’s Brewerytown section, the 6,185 spectators witnessed an intense show of offensive power by the Tigers on an 84-degree afternoon. “Biff, bang, boom, likewise bingo, also kerplunk, crack and swish! Anything, everything, that occurs to your memory to suggest the sound of the impact of the ball against the bat,” was how the Inquirer portrayed Detroit’s performance.3

The Times’s Bruske ventured a bold prediction derived from the lopsided victory by the Tigers, writing, “It is hardly likely that the baseball world will see its like again, in this day of pitcher ascendancy.”4

Indeed, 1908 was the biggest year for pitching in a decade. “Both leagues batted .239, both record lows. Only one of the 16 major league pitching staffs, the Yankees’, had an ERA over 3.00. Seven pitchers threw no-hitters and seven of the all-time 50 lowest season ERAs came in 1908,” according to The Baseball Chronicle.5 It was the year of individual milestones by pitchers Ed Walsh, Christy Mathewson, Addie Joss, and Cy Young.

Perhaps, then, this midsummer batting display by Detroit was out of character for its time. Bruske, however, suggested that the Tigers’ offensive roar this particular day may have resulted from another motive — an unfulfilled itch to settle a score.

One month earlier, on June 14, Philadelphia had snapped a four-game Detroit win streak by the strong relief pitching of Rube Vickers, who held the Tigers to three hits in 7⅔ innings and “made them look rather bad,” he wrote. Vickers was not used further in that series. “Mr. (Connie) Mack (Philadelphia manager) … left Mr. Vickers in the barn … with “the Tigers frothing at the mouth in their strenuous desire to get at him,” Bruske suggested.6

On July 17 the Tigers clashed with Vickers for the second time of the season, and it didn’t go as well for the Michigan righty. He faced but seven batters in his one-third of an inning on the mound, giving up six hits and four runs to the Tigers before being yanked by A’s manager Connie Mack.

Right-hander Biff Schlitzer replaced Vickers to finish the first inning with no further damage and to pitch the second inning, in which he gave up two more runs to the Tigers on four hits.

Philadelphia, meanwhile, plated one run in the first inning off Detroit hurler Ed Summers but scored no more off him during the remainder of his six innings on the mound.

The Tigers faced the third A’s pitcher of the game in the top of the third inning. Bert Maxwell twirled the final seven innings for Philadelphia, during which Detroit batters crossed home plate 15 more times on 17 hits and seven walks.

The dynamic display of Tigers offense was fueled by the ferocious outfield duo who several weeks later would become the American League batting leaders for 1908, Ty Cobb and Sam Crawford. Cobb wore the batting crown with a .324 mark; Crawford finished second at .311.

“As in 1907, Ty Cobb and Sam Crawford (in 1908) led the AL in nearly everything. Cobb won the batting title at .324 and was No. 1 in hits, doubles, triples, total bases, RBIs, and slugging. Crawford led in home runs and was second in runs, RBIs, hits, total bases, batting, and slugging,” states The Baseball Chronicle.7

In this game Cobb secured five hits in six at-bats, including two doubles and a triple, for nine total bases. He crossed the plate three times and knocked in five runs. Crawford also scored three runs and drove in two on four hits, including a double and a triple. Shortstop Germany Schaefer also performed exceptionally for the Tigers, scoring five times and batting in two runs on four hits. Schaefer started as a Detroit infielder in all 153 games of the regular season.

As a team the Tigers hit nine doubles and three triples for 42 total bases. Fifty-nine Detroit batters went to the plate.

Philadelphia’s two runs were scored by left fielder Topsy Hartsel and second baseman Eddie Collins. Each notched three hits, including a triple by Hartsel and a double by Collins. Tigers pitchers Summers and Suggs gave up a total of nine hits to the Athletics. Summers picked up the win for his six innings of work.

Detroit’s fireworks would be the final extravaganza at Columbia Park. In 11 weeks, on October 3, the final big-league game at the park was played, and then stillness settled in. Almost entirely abandoned after the 1908 season, the park was demolished several years later, the only lasting remnant being its sod, which was transplanted to its successor, Shibe Park, after the 1908 season.

Columbia Park, with its tiny, single-deck wooden grandstand, had been built specifically for the Athletics when they joined the newly formed American League in 1901.8 The highlight of its short lifespan came in 1905 when two games of the third World Series were played there in a losing effort to the New York Giants.

The Tigers clawed their way through 72 remaining games and claimed the 1908 American League pennant by a razor-thin margin over Cleveland. Detroit’s record of 90-63 and one tie was a half-game and only four one-thousandths of a point better than the Naps’ performance of 90-64 and three ties. It was the smallest margin of victory in American League or National League history.

Detroit lost the World Series to the Chicago Cubs, however, for a second straight year, this time four games to one.

In addition to the sources cited in the Notes, the author also consulted Baseball-Reference.com, Retrosheet.org, SABR.org, and Phillyclimate.blogspot.com.

3 “Those Detroiters Play Hob With Us.”