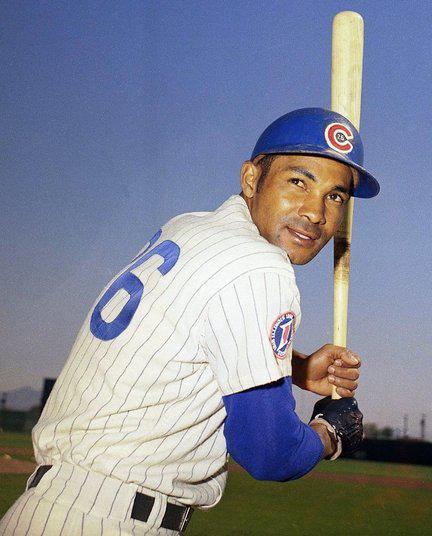 Buried midway down the front page in most of the country’s sports sections was the fact that Chicago right fielder Billy Williams hit for the cycle, propelling the Cubs to a 7-2 victory over the St. Louis Cardinals in the second game of a Sunday doubleheader. The bigger news of the day involved Jim Ryun, a 19-year-old Kansas teenager, who “returned the world record in the mile to the U.S. after a 29-year absence when he was clocked in 3 minutes 51.3 seconds.”1 This broke the current record by 2.3 seconds, which had been set by Frenchman Michel Jazy. Huge headlines and several news columns were devoted to Ryun’s feat. Oh, and by the way, Williams managed a rare feat of his own.

A crowd of 32,590 was on hand at the newly opened Busch Memorial Stadium2 to witness the performance. According to the Chicago Tribune, the Cubs “let one victory slip away today, but Billy Williams saw to it that there would be no such foolishness against the St. Louis Cardinals in the second game.”3 The Cardinals defeated the Cubs in a walk-off, extra-inning affair in the first game. With the score tied at 2-2, each team scored once in the 10th inning, but only St. Louis tallied in the 11th, winning 4-3. Williams drove in two runs in the first-game loss, including the go-ahead run in the top of the 10th with a single.

Ken Holtzman took to the mound for the Cubs in the second game. Chicago’s rookie left-hander hailed from St. Louis, so this must have been a special start for him. He had appeared in three games in September 1965, pitching just four innings. He was making his 16th start of the 1966 season, bringing a record of 3-9 and an ERA of 4.12 into the contest. Holtzman faced veteran Art Mahaffey, who was making his first start since May 27. Mahaffey had appeared in six games since that start, all in relief. Coming into this game, he had struck out 19 batters in 34⅔ innings pitched, but he had also walked 19. Mahaffey had spent the previous six seasons with the Philadelphia Phillies.

Mahaffey started the game by getting Glenn Beckert on a fly ball to center. Lee Thomas and Williams followed with singles to right, placing runners at the corners. Mahaffey uncorked a wild pitch, and Thomas scored. Ron Santo walked, and Mahaffey bounced another wild pitch, advancing Williams to third and Santo to second. Byron Browne drew a walk, loading the bases. John Boccabella laced a single to center, driving in two runs, and St. Louis manager Red Schoendienst had seen enough. He called to the bullpen, bringing in Don Dennis to replace Mahaffey. Dennis retired the next two batters, but Chicago had batted eight men and scored three runs.

Chicago added a run in the top of the third, manufacturing a run. Williams led off with a double to center. He moved to third on a Santo groundout and came home on a fly to center by Browne. The Cubs led, 4-0.

Holtzman was cruising through the early part of the game. Curt Flood singled in the first for St. Louis, making him the only Cardinals batter to reach base through three innings. In the bottom of the fourth, Holtzman retired Julian Javier and Flood, making it nine in a row, until Orlando Cepeda stepped into the batter’s box. Cepeda launched a bomb that “cleared the exit gate in left center.”4Holtzman told reporters after the game that “Cepeda didn’t have to supply any power because I threw the heck out of the ball. He hit a good pitch, a fastball below the knees.”5

Chicago answered in the top of the fifth. Thomas led off with a single and Williams tripled to right field. Williams scored on another sacrifice fly, this one by Santo, and the Cubs had increased their lead to 6-1.

Just before Williams settled into the batter’s box to start the seventh inning, his manager, Leo Durocher, gave him some advice: “Go out there and hit one out.”6 Hal Woodeschick, who had started the sixth inning as the third St. Louis pitcher on the day, “missed the plate on his first two serves.”7 Williams swung at the next offering and parked the pitch in the bleachers beyond the fence in center field, underneath Chicago’s scoreboard. He had just become the seventh player in Cubs franchise history to hit for the cycle. It had been nine seasons since the last performance (by Lee Walls, on July 2, 1957).8

In the Cardinals’ half of the seventh, Mike Shannon doubled and moved to third on an infield single by Tim McCarver. Charley Smith grounded into a double play, but Shannon scored St. Louis’s second and final run. Holtzman walked Dal Maxvill but escaped further damage by striking out pinch-hitter Jerry Buchek, who was batting for Woodeschick.

Williams had one more opportunity to add to his incredible performance. With one out in the eighth, Beckert stroked a ball into left field for a double. Thomas was hit by a pitch, bringing Williams to the plate. The Alabama-born slugger, though, popped out to third baseman Smith in foul territory. Fergie Jenkins came on in the eighth to save the victory for Holtzman, striking out four of the six batters he faced. The Cubs defeated the Cardinals, 7-2.

Williams hit a single, double, triple, and home run in the nightcap, and his “mauling montage came precisely in that order.”9 He became just the eighth player in history to hit for a natural cycle10 and was the first batter to hit for the cycle in St. Louis’s new ballpark. The last batter in the big leagues to hit for the cycle before Williams was Boston’s Carl Yastrzemski, on May 14, 1965.11

Besides the 4-for-5 hitting display, Williams scored all four times he was on base, and he drove in two runs. Williams liked hitting in the new Busch Stadium, telling reporters, “I really got started here the last time when I hit a couple of balls good.”12 Williams went 8-for-14 in the three-game series with St. Louis, raising his batting average to .301, the first time he batted better than .300 all season. Seven different Cubs batters had hits in the win, giving Chicago 15 safeties. Bryant was 3-for-5, and Thomas, Browne, and Boccabella each added two hits.

The outcome didn’t change the standings. Chicago had been in last place for all but nine days in the season, and the Cubs remained there after this doubleheader split. Holtzman picked up his fourth victory of the season, ending a three-game losing streak. Mahaffey, who didn’t make it out of the first inning, took the loss, and this turned out to be his last appearance in the major leagues.13 For his career, Mahaffey had thrown 37 wild pitches in seven seasons.

In addition to the sources mentioned in the notes, the author consulted Baseball-Reference.com, MLB.com, and Retrosheet.org.

2 Sportsman’s Park, also known as Busch Stadium I, was replaced early in the 1966 season by Busch Memorial Stadium (referred to as Busch Stadium II by Retrosheet.org and Baseball-Reference.com). The new ballpark opened on May 12, 1966. The current (2017) park for the Cardinals, Busch Stadium III, opened in April 2006.

11 Both Williams and Yastrzemski are members of the Baseball Hall of Fame.

13 According to retrosheet.org, Mahaffey was traded with Buchek and Tony Martinez to the New York Mets on April 1, 1967, in exchange for Eddie Bressoud, Danny Napoleon, and cash. However, Mahaffey never pitched for the Mets in the big leagues.