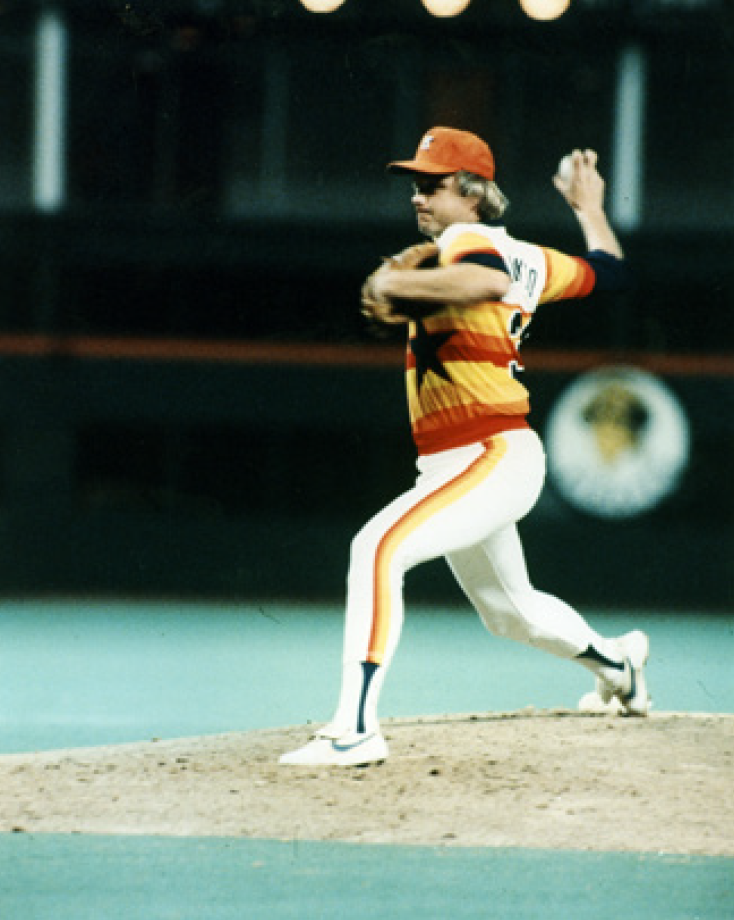 The Philadelphia Phillies were leading the National League East by 4½ games over the Chicago Cubs when they arrived in Houston to play the Astros for the first of a two-game series at the Astrodome. The 48-36 Phillies had their sights set on their third consecutive NL East title, led by future Hall of Famers Mike Schmidt and Steve Carlton, who were complemented by 1978 All-Stars Larry Bowa, Greg Luzinski, and Bob Boone. The Phillies’ pitching staff, anchored by Carlton, Dick Ruthven, and Larry Christenson, had allowed 312 runs to date, the least in the major leagues. The Phillies were finishing their first road trip after the All-Star Game after losing two of three to the Atlanta Braves. Philadelphia sent a rested Christenson to the mound; he was only 6-8 so far and had struggled against the Astros both times he faced them. On May 9 in Philadelphia, Christenson had given up five runs in 6⅔ innings to take the loss, and nine days later in Houston, he had allowed four runs in 5⅓ innings in a no-decision.

Meanwhile, the Astros were lingering in the basement of the NL West. With a 38-49 record and 15 games behind the division-leading San Francisco Giants, the Astros struggled at the plate. Houston had scored 324 runs so far, the second lowest in the NL and the third lowest in the majors. Featuring Jose Cruz, Terry Puhl (the Astros’ only All-Star that season), and Bob Watson at the plate and J.R. Richard, Ken Forsch, and Mark Lemongello on the mound, the Astros were attempting to improve upon their .500 record of the previous season.

Just before the All-Star break, the Astros had traded catcher Joe Ferguson to the Los Angeles Dodgers for two minor leaguers, shortstop Rafael Landestoy and outfielder Jeffrey Leonard, who arrived on September 11 as a player to be named later. Inserted as the starting shortstop and frequent leadoff hitter, Landestoy provided decent defense but little offensive firepower. Immediately after the All-Star break, Houston lost three of five games to the Montreal Expos. During that series, the Astros dropped into last place, where they remained for the next two weeks. Their notable lack of offense, exemplified by 8-0 and 6-1 losses in the final two games of the Montreal series, was not helping the pitching staff.

In the series opener against the Phillies, the Astros sent veteran knuckleballer Joe Niekro to the hill. Niekro, who had lost three of his last four starts, entered the game with a 5-7 record and a 5.69 ERA. In his only previous appearance against the Phillies that season, on May 18, Niekro had given up four runs on four hits without recording an out as his ERA swelled to 7.97. As a result, manager Bill Virdon dropped him from the rotation. He remained in the bullpen until late June, a stretch of five games that ended when Niekro threw 6⅔ relief innings against the Cubs, helping the Astros win a 5-4 squeaker.

Bake McBride, the Phillies’ right fielder and leadoff hitter, doubled to center field to start the game, but Niekro picked him off second base for the first out. Bowa lined out and Garry Maddox flied out. For the Astros, Landestoy flied to left, Puhl grounded out to the pitcher, and Enos Cabell reached first on an error by second baseman Ted Sizemore. But Cruz grounded out to second base to end a scoreless first inning.

Both Niekro and Christenson pitched effectively during the early innings. After Luzinski reached base on catcher’s interference to begin the second inning, no Phillies player reached base until the fifth inning, when Barry Foote struck out but reached first on a passed ball. Sizemore then singled to right field, but Niekro nabbed another baserunner when he picked Foote off second base to squelch the threat.

Christenson had allowed baserunners on two hits, two walks, and two errors though four innings. Niekro started the Houston fifth with a single to left field, moved to second on a bunt by Landestoy, and scored when Puhl singled to center field, giving Houston a 1-0 lead. Cabell grounded out and Cruz hit a fly ball to right field that ended the inning. In the sixth and seventh the teams traded baserunners, but no one scored and the Astros maintained their one-run lead.

Sizemore started the Phillies’ eighth inning with a single to center. Bud Harrelson ran for Sizemore and Tim McCarver pinch-hit for Christenson, who had pitched a solid game by allowing only one run on five hits in seven innings while striking out three and walking three. Harrelson stole second base, but McCarver struck out. McBride followed with a single to center field, plating Harrelson and tying the game, 1-1, before Bowa grounded out into a fielder’s choice and Maddox flied out to left field to end the inning.

In the bottom of the eighth, Tug McGraw replaced Christenson on the mound. Cruz opened the frame with a single to left field but was erased when Watson grounded into a 4-6-3 double play. Art Howe popped out to second for the third out. Niekro retired the Phillies in order in the top of the ninth inning, and McGraw matched Niekro by setting down the Astros in the bottom of the ninth, sending the game into extra innings tied, 1-1.

In the Phillies’ 10th, Harrelson walked with one out. With Schmidt pinch-hitting for McGraw, Harrelson stole second base again, but he advanced no further as Schmidt flied out to left field and McBride struck out. Rawly Eastwick, the former Cincinnati closer acquired from the New York Yankees in exchange for Bobby Brown and Jay Johnstone about a month earlier, succeeded McGraw on the mound and responded with a 1-2-3 inning for Philadelphia.

Niekro had already faced 37 batters and was now pitching in the 11th inning. He had last pitched 10 full innings in a six-hit shutout of the San Diego Padres nearly nine years earlier, on August 21, 1969. Niekro started the 11th by inducing groundouts from Bowa and Maddox. Luzinski walked and was replaced by pinch-runner Jerry Martin, who was stranded when Richie Hebner flied out to right field.

In the bottom of the 11th inning, Cruz led off against Eastwick and belted his fifth home run of the season – his eighth game-winning hit in 19781 — to give the Astros an exciting 2-1 win over the first-place Phillies. Niekro gave up only one run on five hits while striking out eight hitters in his marathon complete game, his fourth of the season. Afterward, Niekro said, “I didn’t get tired, I felt I could have gone two or three more innings.”2 Niekro also was happy to turn around his luck against a team that battered him two months earlier. “The last start against [the] Phillies I felt great in the bullpen but didn’t have great stuff in the game. Tonight was the opposite.”3

Eastwick suffered his first loss as a Phil, dropping to 4-2. “The pitch to Cruz was out of the strike zone,” he said. “He swings at a lot of bad pitches.”4

It was a disappointing 1978 season for the Astros but thanks to victories like this one, they at least escaped the basement, finishing fifth in the NL West, 21 games behind the Dodgers. Although they finished near the bottom of many team offensive categories that season, they did finish second in the NL with 178 stolen bases, with three players exceeding 30 steals: Cruz (37), Cabell (33), and Puhl (32). Cesar Cedeno topped the NL in stolen-base percentage, converting 23 of 25 steal attempts for a 92 percent success rate. Niekro ended the season with a 14-14 record and a 3.86 ERA; the following two years he finished as a 20-game winner as the Astros emerged as a force in the NL West.