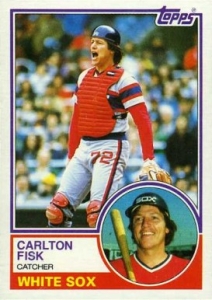 On July 17, 1989, the New York Yankees and Chicago White Sox opened a scheduled three-game series at Comiskey Park.1 The Yankees entered the game with a 46-45 record, six games behind the AL East-leading Baltimore Orioles. The White Sox had won four straight but were 36-56, buried deep in the AL West Division cellar, 18½ games behind the front-running California Angels. The game carried no greater implications than any of the other 161 games on the schedule. What made this game special was the milestone achievement of one of the game’s greatest catchers, Carlton “Pudge” Fisk.

An announced crowd of 18,070 was on hand to watch the nondescript Monday evening pitching matchup that featured a pair of struggling left-handers. The Yankees started journeyman Dave LaPoint, who was pitching for the first time since June 29 because of tendinitis in his left shoulder. 2 LaPoint entered the game with a record of 6-6 and a 5.48 ERA. The White Sox countered with southpaw Steve Rosenberg, who was 2-5 with a 4.69 ERA. Rosenberg, who was making his 11th start of the season, had been inserted into the White Sox rotation after veterans Jerry Reuss and Shawn Hillegas struggled in starting roles.

The game-time temperature was a warm 81 degrees and there was little more than a hint of a breeze as Rosenberg delivered the first pitch at 7:37 P.M. Three pitches later, Steve Sax singled to left. Rosenberg then retired Luis Polonia, Don Mattingly, and Steve Balboni in order, all on fly balls to left fielder Dan Pasqua.

LaPoint also yielded a single to the first batter he faced. Dave Gallagher dropped a single into short right-center and advanced to third when second baseman Fred Manrique sent a liner down the left-field line that skipped into the seats for a ground-rule double. Harold Baines followed with a line-drive single to left-center, scoring Gallagher and Manrique. After Ivan Calderon flied out to center, Fisk came to the plate stuck on 1,999 career hits.

Despite missing more than six weeks with a broken right hand (the same hand he broke in 1988 that caused him to miss 10 weeks), the 41-year-old backstop was enjoying a solid year. 3 Entering the game, he was hitting .299 (his highest average since joining the White Sox in 1981) with 5 home runs and 25 RBIs. The right-handed hitting Fisk banged a two-hopper off the mound and through the infield as Baines advanced to third. Play was halted for a brief salute to the newest member of the 2,000-hit club as Fisk simultaneously acknowledged his family and fans.4

After the standing ovation, the game resumed with Carlos Martinez sending a line-drive single to short left field to score Baines. Fisk stopped at second base. Pasqua followed with an infield single to third to load the bases with one out, and for a moment it looked as though LaPoint might not make it through the first inning. However, first baseman Russ Morman ended the inning by grounding into a 6-4-3 double play. While the White Sox had scored three runs on six hits, LaPoint and the Yankees were fortunate the damage was not worse.

Jesse Barfield trimmed the White Sox lead to 3-1 when he led off the top of the second with a home run to center field. In the bottom of the inning, LaPoint recovered from his shaky first and retired the White Sox in order.

The Yankees cut into the White Sox’ lead again in the top of the third. With one out Luis Polonia doubled to left-center and scored when Calderon erred on Mattingly’s liner to right-center. Balboni followed by hitting into a 5-4-3 inning-ending double play.

With the White Sox ahead 3-2, the two starting pitchers settled in a bit. LaPoint tossed perfect innings in the third, fourth, and fifth, as Rosenberg also kept the Yankees in check.

LaPoint retired the first two White Sox hitters to start the sixth, his 14th and 15th consecutive batters retired. Fisk ended the streak with a double to left-center. LaPoint intentionally walked Martinez to pitch to the left-handed-hitting Pasqua, who singled to right to plate Fisk with the White Sox’ fourth run of the game. Martinez and Pasqua both advanced on the throw. After Morman was intentionally walked, Ozzie Guillen lined out to right to end the inning.

Right-hander Eric Plunk replaced LaPoint in the bottom of the seventh and immediately ran into trouble. Gallagher drew a leadoff walk and moved to second when Plunk balked. With one out and the right-handed-hitting Calderon on deck, Baines was intentionally walked to set up a force or possible double play. Calderon nixed the Yankees’ plan when he hit a groundball single up the middle to score Gallagher. Next up was the man of the evening, Carlton Fisk. Fisk collected his third hit of the night when he singled to left to drive in Baines and increase the White Sox’ lead to 6-2. An aggressive Calderon was thrown out trying to advance to third on the play. Martinez advanced Fisk to second with a single but Pasqua struck out looking to end the inning.

The Yankees mounted a threat in the eighth when Polonia singled with one out and advanced to third on a two-out single to left by Balboni. With runners on first and third, White Sox manager Jeff Torborg lifted Rosenberg and called on Hillegas to face Barfield, who was 2-for-2 with a home run and walk off Rosenberg. Hillegas uncorked a wild pitch on his first offering to the Yankees’ right fielder, and Polonia scored to cut the White Sox lead to 6-3. Barfield eventually walked but Hillegas retired Mel Hall, who was pinch-hitting for Tom Brookens, on a foul pop that White Sox third baseman Martinez squeezed for the final out of the inning.

Yankees manager Dallas Green summoned left-hander Dave Righetti from the bullpen to pitch the bottom of the eighth. Guillen reached on a one-out infield single, stole second, and advanced to third when catcher Don Slaught’s throw sailed into center field. Guillen and Gallagher executed a squeeze play and Guillen scored. Hillegas worked a 1-2-3 ninth and the White Sox won, 7-3. Fisk finished his special night 3-for-4 with a double, one run scored and one RBI.

After the game Fisk described the pitch he hit for number 2,000. “He locked it right in there, right next to me,” Fisk said of the pitch he hit off LaPoint, a former teammate in Chicago. “I’m just glad he didn’t start laughing.”5

At the time Fisk became the 173rd player and the 12th active player to reach 2,000 hits.6 The single was his 1,878th hit as a catcher, the most ever.7 Speaking to reporters, Fisk put his achievement into a broader context. “It wasn’t the one hit,” Fisk said. “It was the culmination of 17 years of hard work.”8 Jim Fregosi, who managed Fisk from 1986 to 1988, substantiated the catcher’s approach to the game. “Pudge works harder than anyone I know because he sets goals for himself and then follows through. I think he’s the ultimate professional,” Fregosi said.9

1 The teams played only two games. The Tuesday, July 18, game and the second game of the Wednesday, July 20, doubleheader were rained out. Because this was the Yankees’ final trip to Comiskey Park in 1989, the game was not replayed and both teams played 161 games that season.