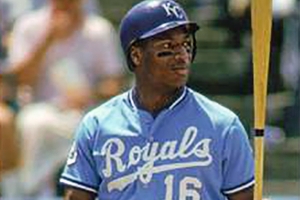 One year after the debut of the “Bo Knows” Nike ad campaign,1 Bo Jackson, the first modern athlete to play both professional baseball and football in the same year, led his Kansas City Royals team with three home runs and seven RBIs in a 10-7 win over the New York Yankees.

The Royals were playing the second of a three-game series against the New Yorkers, in front of 26,777 fans at Yankee Stadium on July 17, 1990. K.C.’s Storm Davis was seeking his third win of the season, opposed by New York’s Andy Hawkins, who was in pursuit of just his second victory (Hawkins had not won since May 6). The two teams were struggling, each sitting in seventh place in their respective American League divisions. The Royals entered the contest with a record of 39-48, while New York had a 31-54 mark.

With two outs in the opening inning, George Brett drew a walk. On a 2-and-2 count, Jackson bashed the ball “well beyond the reach of a leaping [Deion] Sanders”2 in straightaway center field and out of the park. The ball landed an estimated 412 feet from home plate. Sanders later said, “He swings the bat so hard that if the ball touches it, it’s bound to go somewhere.”3

In the third inning, Bill Pecota crushed a Hawkins pitch well beyond the left-center-field fence for a solo home run, getting Kansas City back its two-run lead. Two outs later, Brett walked for the second time, again bringing up Jackson. Hawkins grooved the first pitch to Bo and he crushed it. According to the New York Times’s Michael Martinez, “This one was clearly awesome, landing more than halfway up the bleacher section in right-center field”4 and traveling 464 feet. Even Brett was impressed, saying, “The second home run was an eye-popper. I had to stop and watch that one, it got so small so fast.”5

In the fifth, Kevin Seitzer led off for the Royals with a single to right. Kurt Stillwell popped out. Brett laced a ground-rule double, sending Seitzer to third. Jackson settled into the batter’s box. Hawkins decided to face Jackson, rather than walk him with first base open. After taking ball one, Jackson hit something “that looked like a popup but sailed majestically over the fence in right.”6 This third round-tripper went a mere 328 feet. Jackson’s 19th home run of the season was the 100th of his career. It also meant the showers for Hawkins. Yankees manager Stump Merrill made the call to the bullpen, and Greg Cadaret retired the next two batters. In three at-bats through five innings, Jackson had driven in seven runs, and the Royals led, 8-1.

As Bo trotted out to center field with the Yankees coming to bat in the bottom half of the inning, the New York fans gave him a standing ovation. The home team then gave the fans something else to cheer for. Roberto Kelly led off by doubling into deep left-center. Sanders’ bunt rolled to second baseman Pecota and Sanders reached, with Kelly moving to third. Steve Sax swung at Davis’s first offering and deposited the ball into the left-field bleachers, making the score 8-4.

An inning later, to start the bottom of the sixth, the Royals made a pitching change, with Mel Stottlemyre Jr. on in relief of Davis. Maas drew a one-out walk. Alvaro Espinoza lined a double to left, bringing up Sanders, who worked a full count before driving the ball into right-center. Jackson raced over and dove horizontally for the ball but missed, and the ball rolled to the wall. Sanders tore around the bases and was waved home by third-base coach Buck Showalter. Sanders tried to leap over Royals catcher Mike Macfarlane, who was trying to catch the relay throw, but the two players collided, and the ball got past the catcher. Stottlemyre, who was backing up the play, caught the ball and tossed it back to the plate, but Sanders reached out and touched home for the run before he could be tagged. Safe! The Yankees had now trimmed the lead to just one run. This was the first inside-the-park home run by a Yankee at home since Don Baylor accomplished the feat in 1984.7

Sanders, understandably pumped, said, “I can’t wait to get home and watch that play on TV. It was exciting; it was mean. The adrenaline was flowing.”8 As for Jackson, he felt his shoulder pop on the play and was taken to Columbia-Presbyterian Medical Center for x-rays. The diagnosis was a partial dislocation in which the bone popped out of the joint and then popped back in. Willie Wilson replaced Jackson in center field.

The injury cost Jackson an opportunity to tie the major-league record of four home runs in a game. Even Sanders remarked, “I’m hoping he wasn’t hurt. I wanted to see him come up and hit again.”9

In the top of the seventh, Seitzer doubled and two outs later, Brett walked (for the third time in the game). Jackson’s position in the lineup was still magical, because Cadaret uncorked a wild pitch with Wilson at the plate, and both runners moved 90 feet closer to home plate. Wilson then grounded a single up the middle, driving them in and giving the Royals two insurance runs. The final score was 10-7 in favor of Kansas City.

Speaking of Jackson, Royals manager John Wathan said, “That’s the best performance I’ve seen by an individual in a major-league game.”10 He added, “I think he would have electrified Yankee Stadium just coming up to the plate a fourth time.” New York skipper Merrill also had praise for Jackson: “You give him the ball out over the plate and that’s going to happen. He was a one-man wrecking crew tonight.”11

Sanders, like Jackson a two-sport star (football and baseball), said Jackson was “one of the best athletes who ever put on a uniform.”12 Sanders had a productive night as well, with two hits, including the inside-the-park home run, and raised his batting average to .158.

The two teams combined for 17 runs and 25 hits. There were eight walks and eight strikeouts. Hawkins suffered his fourth defeat in four starts, lasting only 4⅓ innings and yielding four home runs. This game was the season’s seventh in which a batter hit three home runs.13 Wilson added a single in the ninth inning, giving the K.C. center fielders five hits and nine runs batted in. Brett was 2-for-2, but with the three walks, he scored four runs. Storm Davis improved his record to 3-6, and Jeff Montgomery earned his 11th save.

After the game and back at the ballpark, Jackson commented, “I certainly didn’t expect a night like I had, especially getting hurt. But the x-rays came back negative and I should be all right in a few days. I felt great until the ball I tried to dive for. I didn’t try to hit three home runs, but all three pitches were in my strike zone.”14 Jackson’s slugging percentage jumped 36 points to .507. The Royals slugger was not all right in a few days; he did not return to the lineup until August 26. When he did return, he went 3-for-4 with a home run, two runs scored, and two runs batted in against the Seattle Mariners. But on this July night in the House That Ruth Built, Bo Jackson showed that he knew something about hitting the baseball, too.

1 The first commercial spot for “Bo Knows” aired during the 1989 All-Star Game, just after the top of the first inning, when Jackson led off the midsummer classic with a home run.