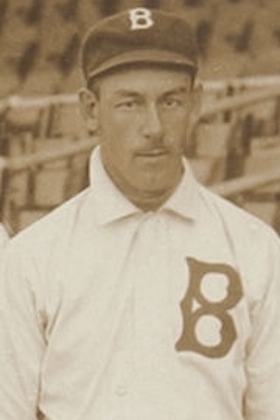 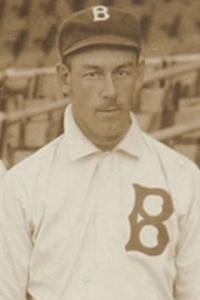 Between games of the doubleheader at Buffalo’s Federal League Park, those in the grandstands enjoyed “old songs from the days of ’61 and modern ragtime jingles”1 played by the 74th Regiment Band. Hopefully the music soothed some spirits. After they watched the battered Buf-Feds lose 8-0 in the first game, it only got worse.

Buffalo manager Larry Schlafly selected right-hander Earl Moore to start in the nightcap, while Baltimore’s player-manager Otto Knabe tapped Irvin “Kaiser” Wilhelm, who’d been handled roughly by Buffalo five days earlier in a 10-6 defeat. From the outset, it was apparent that Wilhelm had recovered just fine and Moore, who’d shut out Baltimore three days before but was otherwise struggling in his 14th and final major-league season, would fare no better than first-game starter Gene Krapp.

“The Terrapins had a regular parade around the bases”2 as they tore into Moore with successive singles by right fielder Benny Meyer, center fielder Vern Duncan, left fielder Hack Simmons,, first baseman Henry Swacina, and third baseman Jimmy “Runt” Walsh. Meyer and Simmons scored, but Duncan was cut down at the plate trying to take an additional base on Swacina’s hit. Shortstop Mickey Doolin then fouled to first for the second out. Second baseman Knabe followed with a single to center, scoring Swacina. Catcher Fred Jacklitsch walked, and pitcher Wilhelm singled past second baseman Tom Downey to score Walsh. Meyer, batting for the second time, popped to Downey for the final out and, just as in the first game, the Terrapins were on top after one inning, 5-0.

Baltimore put another runner across the plate in the fourth when Meyer walked and scored on singles by Duncan and Simmons. They struck again in the fifth. Doolin reached on an error by Everett Booe, a reserve outfielder filling in at shortstop for the injured Bill “Baldy” Louden, the club’s regular shortstop and leading hitter. Doolin advanced to third on Jacklitsch’s single to center. The Terrapins then executed a double steal, Jacklitsch taking second, and the speedy Doolin streaking home. For Doolin, it was his 18th stolen base of the season.

Moore was finally driven from the box in the sixth when, with one out, Duncan walked and Simmons singled to right field. A base hit by Swacina scored Duncan, and a double by Walsh down the right-field line drove in Simmons and Swacina. Doolin followed with another double, scoring Walsh, and the beleaguered Moore was finished for the afternoon. Harry Moran was sent in to relieve, but the rookie left-hander uncorked a wild pitch that allowed Walsh, who’d stolen third, to scamper home with Baltimore’s fifth run of the inning. Knabe and Jacklitsch were then retired in order.

Baltimore made it 13-0 in the seventh when Wilhelm smacked a leadoff single to right and Meyer beat out an infield hit to put runners on first and third. Duncan sacrificed to third, Fred Smith to Joe Agler, to push Meyer up to second as Wilhelm held third. Moran was wild again, hitting the next two batters, Simmons and Swacina, to force in Wilhelm. Meyer appeared to score another run when Walsh flied out to left field but was called out for having left the base before the catch was made.

“Fred Smith was accorded the noisiest ovation of the season when he romped home”3 with the first run of the day for Buffalo in the seventh. Smith had tripled and scored on a base hit by Walter Blair. Light-hitting Bill Collins emulated Smith by tripling in the eighth and scoring on center fielder Charlie Hanford’s single. But it was too little too late for the Buf-Feds. Baltimore had run the score to 15-1 in the top of the eighth when Knabe singled and sprinted home on a double by Jacklitsch, who then scored on a single by Wilhelm.

Wilhelm allowed seven hits and struck out six in winning his ninth game of the season against 13 losses. Except for Duncan, who walked twice and singled, every Terrapin in the lineup had at least two hits, with Wilhelm and Simmons collecting three. Moore, battered for 14 hits and 12 runs in 5⅓ innings, was the loser, dropping his won-lost record to 7-11. Moran gave up five hits and three runs in 3⅔ innings of relief. The Buf-Feds contributed four errors, two by the out-of-position Booe.

In addition to the sources listed in the notes, the author also consulted The Sporting News and a number of local newspapers including the Buffalo Commercial, Buffalo Evening News, Buffalo Sunday Morning News, Pittsburgh Daily Post, and Rochester Democrat and Chronicle.