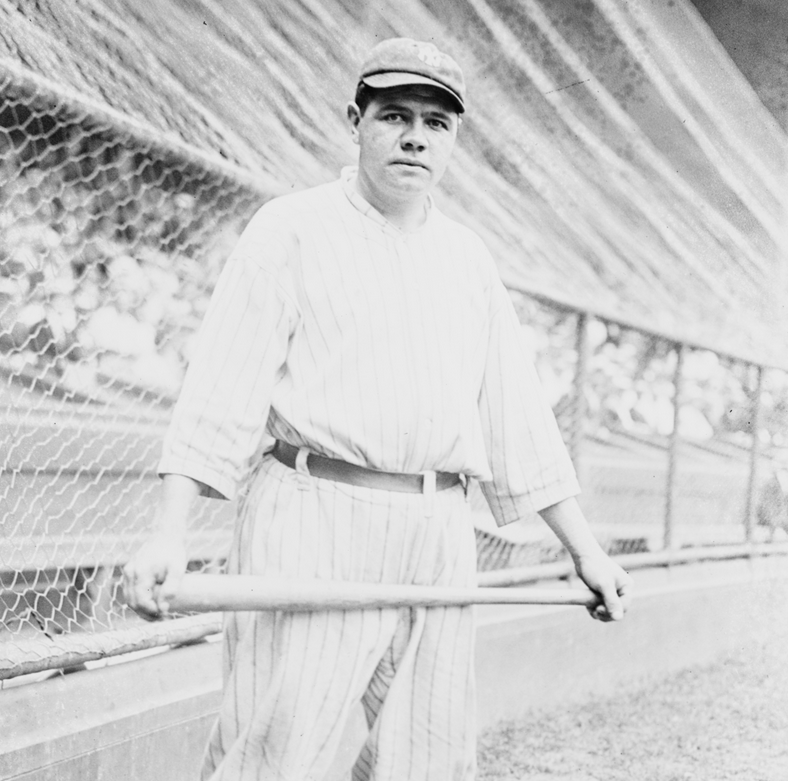 It was the bottom of the eighth inning in a summer contest at Detroit’s Navin Field when Babe Ruth sent a Bert Cole pitch over the fence at the deepest part of the ballpark. The historic shot officially measured a distance of 560 feet, giving Ruth his 36th home run of the season and the 139th of his career.1 The herculean blast broke the major-league record for career home runs, in a career, surpassing Roger Connor, whose total of 138 had stood since 1897.2 It also was Ruth’s longest home run so far. The Yankees defeated the Tigers 10-1, but the score was not relevant; Ruth’s clobbering of a baseball, sending it farther than anyone had in the past, provided the 3,000 or so spectators with “something to talk about in front of the family hearth.”3

At game time the Yankees were riding a six-game winning streak and had won 14 of their last 17, but still were one game behind the first-place Cleveland Indians. Detroit was sliding, having lost four in a row, and stood 13 games behind Cleveland. Carl Mays, New York’s “blond U-boat artist”4 (so named because of his submarine-style pitching), started for the Yankees. For the Tigers, “Manager Ty Cobb entrusted Howard Ehmke with the task of checking the march of the visitors.”5

The Yankees scored early and often. In the top of the first, the first two batters, Chick Fewster and Roger Peckinpaugh, singled to left field and Ehmke walked Ruth intentionally. Frank Baker flied to left, bringing in Fewster. Wally Pipp followed with a single to left, and Peckinpaugh scored. In the second, Wally Schang walked, moved to second on a groundout, to third on a passed ball, and home on Fewster’s single.

The Tigers pegged their lone run in the second. Bobby Veach got a double when his led fly dropped into short right field between second baseman Aaron Ward, right fielder Bob Meusel, and first baseman Pipp. Veach scored on a single to center by Lu Blue.

The Yankees answered quickly. In the third, Pipp launched a one-out homer to the bleachers in right-center field.6 Then the Yankees manufactured a run on a single by Ward, a fielder’s choice, a fly ball, and an RBI single by Fewster. The visitors added three more tallies in the sixth. Fewster singled and was bunted to second by Peckinpaugh. Ruth walked again. Baker lined an RBI single into center field. Meusel then smacked a triple to center field, driving in Peckinpaugh and Ruth. The Yankees led 8-1.

Entering the eighth inning, Cobb brought Bert Cole on to face the Yankees bats. Ehmke had allowed eight runs (five earned) on 10 hits and 6 walks. Peckinpaugh reached on an error by shortstop Ira Flagstead, bringing the historic moment to bear. Ruth had walked in all four previous at-bats. With the count 1-and-1, Ruth “found one to his liking”7 and put such force into the ball that it “disappeared from view at the spot where the wooden fence at the far end of the center field bleachers connect with the concrete walls at the corner of Cherry and Trumbull avenues.”8 According to the New York Times, “the Detroit statisticians aver that it is 560 feet from the plate to the point where the ball soared out of sight over the centre field barrier, and they brought out the old surveying rod and sextant to prove the contention.”9 That could mean that ball actually traveled fartherthan 560 feet before landing. Before this, Ruth’s longest home run was one he hit at the Polo Grounds that was officially measured at 460 feet.10

Ruth came to bat once more, in the top of the ninth inning, and this time, Cole struck out the Bambino to end the inning. The final score was New York 10, Detroit 1.

Fewster led the Yankees with a 4-for-6 day at the plate, and Pipp was 3-for-5 with a home run and two RBIs. He also anchored three double plays at first base for the Yankees. Ruth’s line was a mere 1-for-2 with two runs scored and two driven in, but he also had four walks, which helped his on-base percentage. The home run increased his slugging percentage to a whopping .849.

Mays encountered little difficulty in the game and was only “solved for six safeties”11 by the Tigers (five singles and the double by Veach). He allowed only four hits after the second inning, cruised to a complete-game victory, and improved his record to 15-5. The Yankees had 13 hits. In addition, “the Tigers introduced a quartet of ‘boots,’”12 which accounted for four unearned runs. Coincidentally, the final score of 10-1 matched the outcome of the Yankees-Tigers season series to this point.13

Ruth, of course, continued to add to his home-run total. He hit 23 more round-trippers in 1921, setting a new season high of 59, breaking his own record of 54 set the season before. His career total continued to increase over the next 14 seasons, finally settling on 714 in 1935. That record stood until 1974, when Hank Aaron hit his 715th. Ruth owned the career home-run record for 53 seasons.

1 See https://www.baseball-reference.com/players/event_hr.fcgi?id=ruthba01&t=b for a log of Ruth’s 714 career home runs.

8 Bullion. According to the New York Times, the homer landed in the right-field bleachers. The Detroit Free Press said it landed in the bleachers in center.