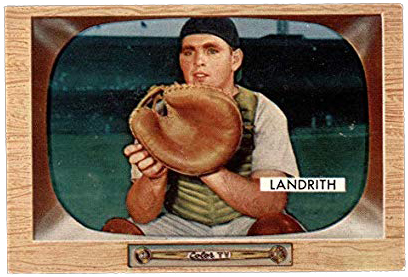 It was a Monday evening well into a season in which the Cincinnati Redlegs would fall short in their ambition to win their first pennant since 1940. The crowd that came to Crosley Field was smallish (13,477), as was the catcher pressed into service by the Redlegs in the late innings. Hobie Landrith had been quite the phenom growing up in Detroit and in 1946 had appeared in the prestigious Esquire’s All-American Boys Baseball Game in Chicago. Two years later, he appeared in the Hearst Classic in New York. He had signed with the Reds (the change to Redlegs took place in 1954) in 1949 and worked his way through their farm system only to become the third-string catcher behind Andy Seminick and Ed Bailey. When he replaced Seminick behind the plate in the 11th inning, his batting average for the season stood at .190 (8-for-42), and it had taken him parts of five major-league seasons to reach the 100-game plateau.

“Perkowski … Perkowski. He walks everyone in sight when he faces the other clubs. I don’t know what he does to us.”1 – Giants manager Leo Durocher on his team having lost to Harry Perkowski for the second time in 1954.

And when one thinks of scoreless duels that went late into the night, the names of Spahn and Marichal and Perry and Haddix come to mind. But Harry Perkowski? Yes, the Redlegs pitcher would be Perkowski as they took on the first-place New York Giants in the bandbox by the Ohio River. Perkowski, a lefty who had won 12 games in each of the prior two seasons, brought a 1-7 record into the game.

The Redlegs players had a slightly bigger cheering section than usual on this July evening; it was Family Night at Crosley Field. Before the game the players, along with their wives and children, were introduced to the spectators.

Perkowski dominated the league leaders, allowing only three hits and striking out Willie Mays twice. The hits, by Al Dark, Monte Irvin, and Whitey Lockman, were scattered, but the Redlegs themselves weren’t able to manage much in the way of an offense against Giants starter Don Liddle, who pitched into the ninth inning, and Marv Grissom, who put out a ninth-inning fire. Al Corwin was in his third inning of work when Landrith struck his ninth hit of the season, a home run that gave the Redlegs a 1-0 win.

Lockman doubled with two out in the second inning, and after Wes Westrum walked, Billy Gardner came to the plate. He launched a fly ball into the no-man’s land in short right field, but second baseman Johnny Temple gave chase and caught the ball with his back to home plate to end the threat, stranding two runners. In the seventh inning Monte Irvin, the leadoff batter, launched a long fly ball to center field. The flight of the ball was interrupted by the clock above the scoreboard and Irvin had to settle for a double. Had the ball sailed to the right or the left of the timepiece, the Giants would have taken the lead. Mays then was called out on strikes and Monte was picked off second when pitcher Perkowski grabbed a comebacker off the bat of Whitey Lockman. Harry fired the ball to Temple before Irvin could return to second base.

In the ninth inning the Giants were hoping to get something going when Mays popped a ball back toward the screen behind home plate. Seminick gave chase and recorded the out, juggling the ball as he ran into the screen. Giants manager Durocher took exception to the call by home-plate umpire Larry Goetz, arguing, as he told sportswriters later, “Seminick ran back. The ball hit in his glove and he hit the screen full tilt. The crash knocked him down, the ball popped up, bounced off the screen and he caught it as he fell. That’s no catch.”2 Goetz listened to Durocher, but when Leo took a kick at Seminick’s mask, which was lying near home plate, Goetz’s patience was exhausted and Leo was invited to make haste to the clubhouse. Lippy was out of the game. It was his first ejection of the season. And Mays was, through the game’s first nine innings, hitless in four at-bats.

Dark’s 11th-inning one-out infield hit proved harmless, as had a one-out walk to Giants catcher Westrum the prior inning.

Giants starting pitcher Don Liddle matched Perkowski, leaving the game when the Redlegs mounted a threat in the ninth inning. With one out, Ted Kluszewski and Jim Greengrass singled. At that juncture, Giants coach Herman Franks, subbing for Durocher, made the call to the bullpen. Of course, Durocher actually made the call, as he was relaying orders from his post underneath the stands. Marv Grissom entered the game in relief for the Giants. The first batter to face Grissom was Wally Post, who hit a fly ball to center field for the second out. The threat ended when Grissom induced Johnny Temple to ground out to Giants second baseman Davey Williams. Liddle’s streak without surrendering an earned run increased to 18⅓ innings. Liddle had been helped early in the game by a defensive gem when Don Mueller gunned down Chuck Harmon, who was trying to score from third on a fly ball.

Al Corwin entered the game for New York when Grissom was lifted for pinch-hitter Bobby Hoffman, who popped out to Redlegs second baseman Temple to end the top of the 10th inning. In the bottom of the inning, manager Birdie Tebbetts inserted pinch-hitter Lloyd Merriman for Seminick and Merriman struck out. Corwin put down the next two batters in the bottom of the inning, but in the 11th he ran into trouble. Roy McMillan led off with a double and Gus Bell was issued an intentional pass. The runners were left stranded as each of the next three batters, Nino Escalera, Greengrass, and Post, hit harmless fly balls to the outfield.

Meanwhile, Perkowski was rolling along. He struck out Mays and Wes Westrum around a Lockman fly ball in the 12th and took a seat in the dugout for the bottom half of the inning. Temple flied to Mays, leading off for Cincinnati. That brought up Landrith, who was looking for his ninth hit of the season.  His ninth hit was his fifth homer of the season and although his batting average stood at only .209, more than half of his hits were homers and his slugging percentage stood at .558. The homer was no cheapie. After taking the first pitch for a ball, Landrith slammed the second offering into the 28th row of the right-field bleachers.

With the loss, the Giants’ first-place lead stood at six games over Brooklyn; the Dodgers had also lost that evening. New York would go on to win the pennant and sweep Cleveland in the World Series. The Giants’ top hitters, Mays and Don Mueller, each went 0-for-5 in this game and saw their batting averages drop to .351 (Mueller) and .326 (Mays). The two would take command of the batting race with Mays finishing the season at .345, three points ahead of Mueller. Mays was named his league’s Most Valuable Player.

Don Liddle, who started the game on the mound for the Giants, would go 9-4 in 1954 and win the fourth game of the World Series.

Nino Escalera, who ran for Kluszewski in the ninth inning, is not known to most baseball fans, but that does not diminish the fact that he was the first player of color to play for Cincinnati, making his debut on April 17, 1954. He would play in only one major-league season, but his role in history is secure.

As for Harry Perkowski, his win in this game was his second and last victory in 1954. Both were at the expense of the Giants. He would play one more season, going 3-4 for the Cubs in 1955.

Although Landrith was in only his 101st game, his best years lay ahead. He moved on to the Cubs and was their first-string catcher in 1956 when he had a career-high 32 RBIs. In 1959 he was with the Giants in San Francisco, batting .251 with a career-high 14 doubles in 109 games as the first-string catcher. He was with the Giants through 1961, serving as a mentor to a young Tom Haller. The two became lifelong friends. And prior to the 1962 season, Landrith was the first expansion-draft pick of the New York Mets.

In addition to Baseball-Reference.com, the author used the following: