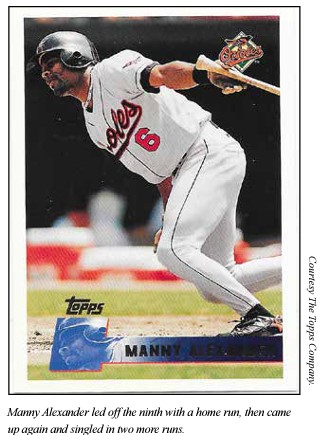 “Jays Turn Victory into Defeat” read the headline in the Ottawa Citizen the morning after the Baltimore Orioles beat the Toronto Blue Jays, 9-7, in a Sunday afternoon game at Toronto’s SkyDome.1 The home-team Blue Jays were three outs away from a 7-2 victory over the visiting Orioles when a terrible finish erased their terrific start.

The Blue Jays had suffered a devastating defeat on June 21, when a ninth-inning grand slam gave Milwaukee a 10-9 win. Toronto went into an eight-game losing streak and had dropped from third place in the American League East to fifth. Despite winning three of their last four games, the Blue Jays (23-35) were 10 games out of first place. The Orioles (27-33) had won four of six games on their most recent road trip, which wrapped up with this game in Toronto.

A Sunday crowd of 42,226 came out to root for the Jays. Manager Cito Gaston gave the start to third-year right-hander Woody Williams, making his first start in the big leagues after 88 appearances out of the Blue Jays’ bullpen. Baltimore skipper Phil Regan countered with John DeSilva, a righty making just the second start of his career.2 DeSilva had been called up from the minors to pitch on June 27, earning his first victory after pitching 5⅓ innings in a game against the Milwaukee Brewers.

Williams dominated from the umpire’s “Play Ball!,” striking out the side in the first. In the home half, Paul Molitor singled with one out and went to second on a passed ball. DeSilva walked Roberto Alomar, and Joe Carter hit the pitcher’s first offering deep into the seats in left, giving Toronto a 3-0 lead.

Ed Sprague led off the Blue Jays’ fourth with a homer to left. DeSilva retired Shawn Green but then walked Candy Maldonado, his fourth free pass of the game, prompting Regan to make a change. Mike Oquist relieved DeSilva and got out of the inning. However, an inning later Oquist was in trouble. He walked leadoff batter Alomar, who stole second on the first pitch to Carter. Carter popped out and then Oquist intentionally walked John Olerud, who was riding a five-game hitting streak. This move backfired when Sprague lined a double into left field, driving Alomar and Olerud home.

In the bottom of the seventh, with Mark Lee now pitching for Baltimore, Domingo Cedeno tripled and scored on Molitor’s sacrifice fly. The Blue Jays led, 7-0. Their pitcher Woody Williams turned in a “gutsy, seven-inning effort”3 for his first start, a sportswriter observed. Harold Baines had doubled with one out in the second, and then Williams held the Orioles hitless through the seventh.

As the eighth inning opened, though, it all changed. Kevin Bass singled to lead off. After Jeff Huson fouled out, rookie catcher Gregg Zaun hit his first major-league home run, cutting the score to 7-2. After Curtis Goodwin grounded out to first, unassisted, Gaston decided to pull his starter. Williams had thrown 103 pitches. He walked off the field to a standing ovation. Reliever Danny Cox finished the inning, striking out Brady Anderson. Armando Benitez pitched the eighth for the Orioles, striking out the side on 16 pitches.

As the top of the ninth got under way, Toronto rookie Tomas Perez jogged out to play shortstop and Cedeno moved from his position at shortstop to second base, replacing Alomar. In a bizarre development, Alomar was taken off the field due to a death threat against him. The Toronto Star reported that “Metro Police arrested a 31-year-old Port Hope woman after she was held by [the SkyDome] hotel staff. A stolen, loaded .22-calibre handgun was found in her possession,”4 and she had allegedly threatened to kill Alomar.5 Taking no chances, Gaston changed his infield.

Manny Alexander led off and lifted a fly ball over the left-field wall to start the Orioles’ offense. Rafael Palmeiro singled, as did Cal Ripken. (Palmeiro motored to third on the hit.) Ricardo Jordan replaced Cox on the mound. Jeffrey Hammonds batted for Baines and drove a fly ball into left, deep enough for Palmeiro to score Baltimore’s fourth run. Jordan then struck out Bass for the second out. Again, Gaston made a move to the bullpen, bringing on rookie right-hander Tim Crabtree to face Bret Barberie, now pinch-hitting for Huson. Crabtree had been called up to Toronto from Triple-A Syracuse on June 23, bringing a 5.40 earned-run average with him. He had pitched to one Baltimore batter the day before. Barberie lined “a low fastball up the middle, past Crabtree”6 to keep Baltimore’s hopes alive. Ripken stopped at second base.

Chris Hoiles became the third pinch-hitter of the inning, batting for Zaun. Hoiles sent Crabtree’s offering to right field for the potential final out, but it bounced off Shawn Green’s glove for an error. (Green admitted, “I just took my eye off it.”7) Both Ripken and Barberie scored, and Hoiles ended up on second base. Goodwin then grounded a ball to Perez, who glanced at third (Hoiles was running on the play) but threw to first. His throw was high, pulling Olerud off the bag, and Goodwin was safe on the throwing error. With runners at first and third, Gaston called for Crabtree to walk Anderson, loading the bases. Manny Alexander dug in a the batter’s box for the second time in the inning. The Orioles had batted around.

Alexander said he realized that “Crabtree was a rookie who was struggling and couldn’t afford to walk in the tying run.”8 So, figured Alexander, he was going to get a steady dose of fastballs. He reckoned correctly and lashed a 1-and-1 fastball up the middle for a single, driving in Hoiles and Goodwin. The Orioles had completed a miraculous comeback. Crabtree, surely frazzled by his team’s shoddy defense, uncorked a wild pitch to Palmeiro, allowing Anderson to score Baltimore’s ninth and final run. Crabtree retired Palmeiro on a fly ball to center for the only out he was credited with. He had faced six batters, allowing four runs, all unearned. Baltimore had scored seven runs (five unearned) in the final inning and now led, 9-7.

Doug Jones came on for the Orioles to close out the ninth. The Jays went quietly, three up and three down, with Jones fanning Carter for the final out. Several Orioles came running out of the dugout onto the field, “as if a bench-clearing brawl had broken out. Except there were handshakes all around, instead of punches.”9 Hoiles commented, “Any time you can come up with seven runs in the ninth inning and win, that’s pretty impressive.”10

This was the first time the Blue Jays had given up seven runs in the ninth inning. After the game, Sprague lamented, “It looked like it was in the bag, then the baseball gods took over.”11

Baltimore sent 11 batters to the plate in the ninth inning. Two errors and a wild pitch kept the inning going, after Toronto had gotten two outs. Palmeiro said, “That’s what’s so good about baseball. If it was basketball or football, and there was a minute to go, it would’ve been over.”

With the comeback, “a solid 4-3 road trip turned into a great 5-2 road trip and was a bit of a payback.”13 In the last six seasons, the Blue Jays had beaten the Orioles in the final at-bat 14 times, including 12 times at SkyDome. Toronto were 4-4 leading up to the 1995 All-Star Game. Afterward, they went 29-48, falling to last place in the division. Meanwhile, Baltimore won nine of its next 13 games and finished the 1995 campaign in third place, two games below .500.

2 This game was DeSilva’s last one in the majors. He was granted free agency by the Orioles at the end of the season but never made it back to the big leagues.

5 Alomar lived in the SkyDome Hotel during the regular season.