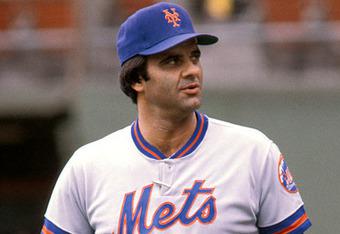 The New York Mets surpassed the million-mark in home attendance for the 1975 season on July 21.1 But there was nothing to celebrate at Shea Stadium as the home team lost to the Astros 6-2. Fans did cheer for home runs by Dave Kingman and Rusty Staub. But they also witnessed George Stone’s poor mound performance. Stone gave up five runs and eight hits in fewer than three innings of work.

The most notable “achievement” of the night came from Joe Torre. Torre had joined the Mets that season after playing 15 years with the Milwaukee – later, Atlanta — Braves and the St. Louis Cardinals. At the time, he was hitting .270 and had become one of the Mets’ leaders. In a few years, Torre would become their manager.2 But this night, the 1971 National League MVP entered the record books with an especially inept series of at-bats.

Torre hit into a record four double plays during the game. All night long, he hit groundballs that found their way into the gloves of Astros’ defenders with first base occupied and was doubled up after force plays at second. Torre became the first National League player in history to hit into four double plays in one game. Mike Kreevich of the 1939 Chicago White Sox and Goose Goslin of the 1934 Detroit Tigers had done it in the American League. After the game, Torre gave his thoughts about the record: “When I retire, I’m gonna buy a shortstop and put him in my den. At night when I’m lonely, I’m going to go down there and hit grounders to him.”3

Houston jumped out to a first-inning lead off Stone and never looked back. Consecutive singles by Wilbur Howard and Greg Gross left runners on second and third after a throwing error by Mets shortstop Mike Phillips. Howard then scored on a grounder to the second baseman and Gross moved to third. Gross scored when Bob Watson hit another grounder back to the mound that Stone deflected to Phillips. The shortstop’s only play was to first and Watson was thrown out. Houston finished their half of the first inning with a 2-0 lead.

In the bottom of the first, Felix Millan, batting second, singled for the Mets’ first hit of the game. Torre came to the plate and promptly hit a ground ball back to Houston pitcher Ken Forsch, who threw to second baseman Larry Milbourne for the first out; the relay to first completed the first double play of the game and ended the inning.

The Astros added to their lead in the second. Milbourne singled to right field and moved to second on a bunt by Forsch, who reached first safely. Stone picked off Forsch off, but Howard then doubled to score Milbourne. By the time Stone got the third out, the Astros were up 3-0.

The Mets got one run back in the bottom of the second. Staub hit a leadoff home run to make it 3-1 in favor of Houston. It was Staub’s 12th homer and 64th RBI of the season.

Stone continued to struggle in the third inning. After getting Enos Cabell to ground out to shortstop, he gave up consecutive singles to Watson and Cliff Johnson. A ground ball out by Doug Rader left runners at first and third. But Roger Metzger drilled a triple to right field, scoring both runners. That finished Stone’s night. Manager Yogi Berra4 replaced him with Ken Sanders, who got the third out. The Astros now led 5-1.

In the bottom of the third inning, consecutive singles by Del Unser and Millan put the Mets in position to get closer. Their chances disappeared when Torre hit another ground ball. This one was right to shortstop Metzger, who threw to second to start the second double play of the game and end the Mets’ chances of scoring.

Houston added a run in the fourth against Sanders. Howard singled for the second time in the game. He reached third when Gross hit another single to right field and scored after Cabell hit a ground ball to shortstop. The Astros were ahead 6-1.

The Mets continued to get runners on base but failed to score in the fourth and sixth innings.5 Millan led off the sixth with his third single of the day. Torre once again hit a ground ball, this time to the right side of the infield. Milbourne tossed to Metzger covering second to start the third double play of the game.

Leading off the seventh, Kingman nicked Forsch for his 19th home run of the year. With the score 6-2 in the bottom of the eighth, Unser bunted his way on base. Millan followed with his fourth single of the day. Torre stepped up to the plate. He had a chance to continue the rally. Instead, he rapped — you guessed it — a ground ball to Metzger at shortstop. Millan was once again forced at second and Torre was out at first. Torre had hit into four twin killings on the day and was responsible for eight outs.

Torre now held a dubious record that no player would envy. Mets broadcaster Ralph Kiner said afterward, “I can remember the day when they would’ve given him a standing ovation. When Billy Cowan struck out six times in a row in a doubleheader in Chicago once, he was cheered by 40,000 people. It’s the instinct for the underdog, I guess.”6

Even after Torre’s record double play, it looked like the Mets still might score in that inning. Unser had reached third, and Forsch then walked Staub to bring up Kingman, who hit the ball deep to center field. The fans hoped for another home run. But Howard tracked down the ball at the warning track; any Mets comeback hopes were gone.

Forsch retired the Mets in order in the ninth for his fourth win of the year. His effort was overshadowed by Torre’s frustration. A thoughtful Torre told reporters after the game that “I couldn’t have set a record without Millan. He ought to get an assist.”7

Torre reflected later that “[i]t would’ve been fun if we had won. I’ll just tell the kids [I] hit four bullets. Tom Seaver said he’d hide me in his trunk to get me out of here.”8

5 Forsch retired the Mets without a baserunner in the fifth inning.