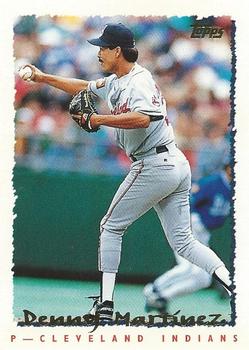 Someone forgot to tell Dennis Martinez that he should be winding down his major-league career at his age of 41. Instead, it was as if he had found a fountain of youth and become invincible since the start of the 1995 season, as he remained undefeated in nine decisions after his complete-game win against Oakland on July 21. Martinez was a key contributor with the Cleveland Indians, who were the runaway leader in the American League Central Division in July and eventually captured the AL pennant.

Going into the first game of a three-game series at Oakland, Cleveland had a 53-22 record and a 14½-game lead over the Milwaukee Brewers. The Indians had been in sole possession of first place in their division since May 12, while the A’s were currently in last place in the West Division.

The right-handed Martinez, who had pitched two innings in the All-Star Game on July 11, was making his 16th start of the season. To date, he had a 2.47 ERA and had walked only 17 batters in 102 innings pitched.

The A’s countered with Todd Stottlemyre as their starter. He was the leader of the A’s staff, having posted an 8-2 record and an ERA of 3.72. The righty had pitched five games with double-digit strikeouts in his 16 starts, including 15 in a game on June 16 against the Kansas City Royals. The A’s lineup was without first baseman Mark McGwire and outfielder Rickey Henderson, who were nursing nagging injuries, while outfielder Ruben Sierra was on the disabled list.1

The Indians’ Belle got the scoring started in the top of the second inning when he hit a solo home run at the 400-foot mark in center field. It was his 17th of the season and fifth in the last 20 games.

Retiring seven of the next eight batters, Stottlemyre held the Indians in check until he faced Belle again in the fourth inning. Belle and Thome both singled before the 23-year-old Ramirez cleared the bases with his 22nd home run of the season. Ramirez picked up where he left off the week before, when he homered three times in the Indians’ four-game sweep of the A’s.

Meanwhile, Martinez held the A’s scoreless until the fourth. That’s when Geronimo Berroa singled to lead off the home half of the inning and Mike Aldrete doubled off the fence in right. Brent Gates then hit a fly to deep right-center field which Ramirez caught, but it scored Berroa from third to make the score 4-1. After walking Mike Bordick, Martinez retired Stan Javier, who represented the tying run at the plate, on a groundout.

In the top of the fifth inning, Cleveland extended its lead when Stottlemyre served up his third homer, to Peña, making the score 5-1.

The Indians scored their final run in the sixth on Herbert Perry’s single that scored Thome, who had singled and advanced on a wild pitch.

Don Wengert replaced Stottlemyre in the top of the seventh and threw three perfect innings. Martinez retired 13 of the last 14 batters he faced, yielding only a double to Scott Brosius.

Martinez picked up his ninth win while hurling his third complete game of the season. He yielded six hits, struck out six and walked three. He had not lost a game since July 31, 1994. Indians GM John Hart commented, “For two years he’s been the anchor of our staff. He’s been as good as anybody in the league since May of last year.”2

Stottlemyre was tagged with his third loss, giving up all six runs on six hits and two walks.

The Indians’ three homers put them at 118 for the season in 76 games played. The Plain Dealer noted that the Indians were on pace to belt 224 in the 144-game strike-shortened season, which would easily surpass their club record of 187 in 1987.3 The Indians wound up breaking their record with 207 home runs.

Martinez was the first Indians pitcher since Barry Latman in 1961 to start a season 9-0. Johnny Allen held the franchise record by starting the 1937 season with a 15-0 record.5 Martinez’s streak was broken when he took the loss in his next outing, on July 26, against the California Angels. In his 12 games from July 26 to the end of the season, Martinez wasn’t nearly as effective as he was in his earlier nine-game winning streak: He posted a 3-5 record and 4.14 ERA. However, he had an excellent outing in the deciding sixth game of the ALCS against the Seattle Mariners.

Martinez, the first Nicaraguan to play in the major leagues, played three more seasons in the majors. In his 23 seasons, he compiled a 245-193 record and a 3.70 ERA, and was selected to four All-Star teams.

The Indians maintained their winning ways for the remainder of the year to win the Central Division by 30 games and beat Seattle to end a 41-year drought for an AL pennant, only to lose in the World Series to Atlanta.