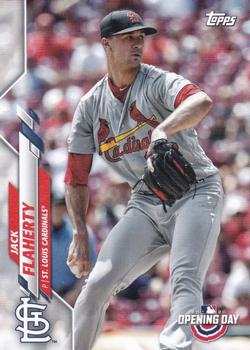 The St. Louis Cardinals treat Opening Day with more than traditional pomp and circumstance. Sure, red, white, and blue bunting flutters throughout Busch Stadium, signaling the start of another season. The Cardinals, though, make it a day to remember — introducing the team via motorcade, recognizing their Hall of Famers, and parading the world-famous Budweiser Clydesdales around the ballpark, all in front of an energized red-clad crowd.

Those cherished moments were absent from the 2020 season opener — and so were fans — when the Cardinals finally played ball for the first time, on July 24 against the Pittsburgh Pirates. The start of the season was delayed nearly four months — some 120 days — because of the coronavirus pandemic that pierced the country.1

On March 12 Major League Baseball announced that spring training would be stopped and the start of the season delayed by at least two weeks. Four days later, the start of the season was postponed indefinitely. It was not until June 23 that plans for the season finally were announced — featuring a 60-game schedule to be played in slightly more than two months against regional opponents only from both the National and American Leagues (to mitigate travel), with no fans in the stands. Teams resumed spring training, dubbed “summer camp,” in major-league cities on July 1; they had just over three weeks to prepare for the condensed campaign.

For the Friday night opener, the Cardinals started the burgeoning ace of their pitching staff, 24-year-old Jack Flaherty,2 who was coming off a 2019 season in which he posted a microscopic 0.91 ERA over 15 starts after the All-Star Game and finished fourth in the NL Cy Young Award voting.3 The hard-throwing right-hander delivered, working seven strong innings to lead the Cardinals to a 5-4 victory. He allowed two runs on six hits (all singles) with no walks and six strikeouts. In acknowledgment of the social-justice issues enveloping the United States, Flaherty wore his “Black Lives Matter” batting practice T-shirt for the national anthem while his teammates donned their home white jerseys.4 The jerseys had a “Black Lives Matter” patch on the left sleeve; a “BLM” stencil accompanied MLB’s logo on the back of the pitcher’s mound.5

The Cardinals grabbed a 1-0 lead in the third inning when Tyler O’Neill homered to left-center leading off against Pirates starting pitcher Joe Musgrove. Dexler Fowler’s leadoff homer to right off Musgrove made it 2-0 in the fifth. An inning later, a two-out RBI single by Yadier Molina off Clay Holmes scored Paul Goldschmidt, who had singled and advanced to second on a wild pitch and to third on a groundout, extending the lead to 3-0.

Meanwhile, Flaherty was cruising. He retired the first nine Pirates he faced before allowing singles to Kevin Newman and Kevin Frazier in the fourth. When Flaherty struck out Colin Moran on three pitches to end the inning and there were no cheers from the stands, he realized things were not the same in 2020.

Hundreds of fans milled about outside Busch Stadium and at adjacent Ballpark Village on a toasty evening with a first-pitch temperature of 90 degrees. “There’s plenty of fresh air,” Cardinals fan George Littlefield said. “I just need to hear the crack of the bat. It’s still baseball season.”7

Flaherty worked perfect innings in the fifth and sixth — extending his streak of consecutive regular-season scoreless frames to 25 — before the Pirates parlayed four singles into two runs in the seventh, with Jacob Stallings driving in Josh Bell and Moran to trim the Cardinals’ advantage to 3-2.

“I saw a guy that was super-efficient,” Cardinals manager Mike Shildt said of Flaherty, who threw 62 of his 89 pitches for strikes. “He was in control of everything he was doing. In the seventh, he was still making quality pitches.”8

The Cardinals added two necessary insurance runs in the eighth when Goldschmidt reached on an infield single leading off against Richard Rodriguez and Paul DeJong followed with a two-run homer to left. It marked the second straight Opening Day in which the Cardinals socked three round-trippers.

Ryan Helsley worked a perfect eighth inning, and the Cardinals turned to newcomer Kwang Hyun Kim in the ninth. Kim signed with St. Louis as a free agent in December 2019 after pitching 13 seasons in the Korea Baseball Organization. He surrendered a pair of runs on a single by Jose Osuna after Bell reached on an error by third baseman Tommy Edman, and Moran doubled. Kim subsequently induced a double-play groundball off the bat of Stallings to secure the save in his major-league debut.9

“We’re 1-0 right now,” O’Neill said. “(With a 60-game season), the emphasis is definitely there for these early wins, so we’re going to try to take advantage of that.”10

Goldschmidt and Kolten Wong each had two of the Cardinals’ nine hits, while Moran and Osuna had two apiece of the Pirates’ eight hits. MLB instituted a universal designated hitter in 2020, and Matt Carpenter filled that role for St. Louis in the opener, becoming the first Cardinal ever to do so in a NL game. The last time the Cardinals had utilized a designated hitter in a home game was during the 1982 World Series.

On July 30 — just six days after the Opening Day — the Cardinals learned that two of their players had tested positive for COVID-19. Ten of St. Louis’s players and eight staff members ultimately were positive for the virus. For the Cardinals, who had a 2-3 record at the time, the outbreak resulted in their next 14 games being postponed beginning July 31 — the longest nonstrike shutdown for a team in major-league history. It also set up a daunting schedule of 53 games in 44 days when their season resumed August 15.11 They had only two offdays and played 11 doubleheaders consisting of two seven-inning games.12 Even at that pace, the tight calendar left St. Louis as one of only two teams — Detroit was the other — to play fewer than 60 regular-season games in 2020. They played 58 games; it was decided not to make up the other two.

Nevertheless, the Cardinals overcame the challenges and wound up with a 30-28 record, good for a second-place tie in the NL Central Division with the Cincinnati Reds, three games behind the Chicago Cubs.13 St. Louis won the tiebreaker with Cincinnati by virtue of its 6-4 record in head-to-head games to earn the fifth seed in the eight-team NL playoff. The Cardinals lost a best-of-three wild-card series to the fourth-seeded San Diego Padres, two games to one.

Pittsburgh finished with the worst record in the majors at 19-41.

The Cardinals had 44 players appear for them in 2020 — 25 pitchers and 19 position players — with 21 players spending time on the injured list. The team made a whopping 151 transactions over the course of the season from July 24 to September 27. Thirteen Cardinals made their big-league debuts.14

Flaherty compiled a 4-3 record with a 4.91 ERA, while striking out 49 batters in 40⅓ innings. He held opponents to three or fewer runs in eight of his nine starts. Take away the nine runs he allowed in three innings at Milwaukee on September 15 and his ERA drops to 3.13.

Two of the Cardinals Hall of Famers who would have taken part in Opening Day festivities under normal circumstances died in 2020 — outfielder Lou Brock on September 6 and pitcher Bob Gibson on October 2.

In addition to the sources cited in the Notes, the author used the Baseball-Reference.com website for player, team and season information, as well pitching game logs and the box score for this game:

1 The Cardinals originally were scheduled to open the 2020 season on March 26 at Cincinnati.

6 Goold, “Back in Business: Cards Hang On to Win Long-Delayed Opener”: B1.

9 According to the Cardinals, Kim at age 32.002 was the fifth oldest pitcher to earn a save in his major-league debut.

10 Goold, “Back in Business: Cards Hang On to Win Long-Delayed Opener”: B4.

11 The Cardinals resumed play with a doubleheader against the Chicago White Sox at Guaranteed Rate Field. Out of an abundance of caution, the traveling party drove individually in 45 rental cars to Chicago on August 14.

12 The Cardinals were 13-9 in their doubleheaders, including three sweeps.

13 The Cardinals played only 58 games because games 59 and 60 (in Detroit) did not have had an impact on which teams made the postseason.