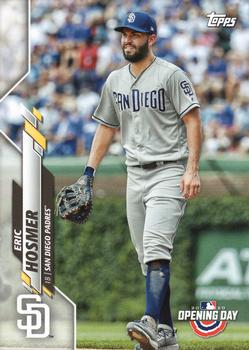 Like almost every game played in San Diego during summer evenings, this Friday was no different: a comfortable 73 degrees Fahrenheit and “mostly clear.” But on this particular game night in July 2020, some things were different … wildly different.

Every new year, baseball fans await Opening Day. It coincides with the arrival of springtime. It means that games are played, legends are created, and memories are made. Traditionally, the first game is played in early April, but the 2020 schedule had the Padres opening on March 26 at home in San Diego.1

In January 2020 news of a deathly virus in China emerged. Within a month, a worldwide coronavirus pandemic had taken over life in the United States and throughout the world. Major League Baseball, in response to the pandemic, announced on March 12 that the start of the season was to be delayed at least two weeks. That proved to be wishful thinking. The delay soon extended into May, then June.

Finally, in early July MLB announced a plan to move forward. The reconfigured schedule set Opening Day for the Padres on Friday, July 24, at Petco Park.

In the Padres’ original 2020 season schedule, July 24 was to be game number 104 of the regular season’s 162 games. In the new reality caused by the pandemic, the July 24 game was instead game number one of a shortened 60-game “championship season.” The season was to be completed within two months. Playoffs were scheduled to follow the end of season, with three more teams from each league added to the mix, leading to the crowning of a 2020 World Series champion in the last week of October.

The shorter pandemic-constrained season introduced new challenges for each of the teams:

Delayed by 119 days, San Diego’s 2020 Opening Day game finally got underway at 6:10 P.M. with a called strike thrown by Padres starting pitcher Chris Paddack to Diamondbacks leadoff batter Ketel Marte. On Paddack’s fifth pitch, Marte opened his season with a single to left field. Any rally was quickly doused with an infield groundball that was turned into a double play.

For the first time in each team’s history, the two National League rivals had designated hitters in their starting lineups: Christian Walker for Arizona and Ty France for the Padres. Both hit singles, Walker in the second inning and France in his fourth at bat in the eighth inning.

The first five innings went by with little excitement and no runs scored. The absence of fans was evident in the televised production. Other than some stationary cutouts of fans placed in rows behind home plate, the empty seats were evident in the background, especially as foul balls were traced into the stands. Instead of fan noise, viewers could hear the ball hit the empty seats. In the third inning one of the Padres’ television broadcasters, former player Mark Grant, summed up what was missing this way: “Fans are the heartbeat of the game.”3

The Diamondbacks starting pitcher was Madison Bumgarner, pitching in his first game for his new team after 11 seasons and 119 wins with the San Francisco Giants. Through five innings, he allowed the Padres just two hits.

The game was scoreless as the Padres came to bat in the bottom of the sixth. With one out, shortstop Fernando Tatis Jr. hit Bumgarner’s first pitch to right field and reached second base with a double. Two walks sandwiched a groundout, bringing up first baseman Eric Hosmer with the bases loaded and two outs.

Bumgarner went after Hosmer and got two quick strikes. With the count 0-and-2, Hosmer hit a double to deep right-center field, clearing the bases. The Padres were ahead, 3-0.

Hosmer’s double was on Bumgarner’s last pitch of the game; Diamondbacks manager Torey Lovullo brought in reliever Junior Guerra, who was able to get the final out in the inning.

To start the seventh inning, 39-year-old Padres manager Jayce Tingler, at the helm for his first major-league game, summoned reliever Emilio Pagan to face the middle of the Diamondbacks’ batting order. Pagan got two quick outs, but right fielder Kole Calhoun spoiled the shutout with a home run, cutting the Padres’ lead to 3-1. On his next pitch, Pagan got Diamondbacks catcher Carson Kelly to ground out, ending the inning.

As the Padres came up to bat in the bottom of the seventh inning, they faced a new pitcher, Kevin Ginkel. He got two outs with strikeouts, but also allowed a single to Trent Grisham and a walk to Tatis, giving the Padres runners at first and second with left fielder Tommy Pham at bat.

Pham hit a single on the first pitch, scoring Grisham and increasing the lead to 4-1. Jurickson Profar followed with a walk; for the second time in two innings, Hosmer was at bat with the bases loaded.

The result was the same as in the sixth. Hosmer hit a double — this time to left field — and three runs scored. The Padres’ lead was extended to 7-1.

That was it for Ginkel; Stefan Crichton was called on to pitch. He recorded the inning’s final out with a strikeout of Wil Myers.

No runs were scored by either team in the eighth inning. In the ninth inning, Tingler brought in Javy Guerra to close out the game. He gave up a single to Starling Marte, playing his first game for Arizona after an offseason trade with the Pittsburgh Pirates. Marte eventually scored on a single by Walker, making the score 7-2. The next batter, Calhoun, grounded out for the third out.

With six shutout innings, Paddack received credit for the win and demonstrated why the Padres expected him to be the team’s number-one starter. Bumgarner, who took the loss, was also expected to be a number-one starter by the Diamondbacks, and he pitched well enough until that one pitch to Hosmer in the sixth inning.4

For this unique 2020 Opening Day game, played in late July during a raging pandemic with no fans in attendance, the main story line had to be that major-league baseball was “back.” The season’s start was delayed by four months, new safety protocols were in place, and there were some unique rule changes. But games were finally being played again, fans could follow them on television and radio, and box scores were back in the morning newspapers.

As for the game itself, the story line was headlined in the next day’s newspaper: “Hosmer Comes Through.”5 The article went on to report, “It was Eric Hosmer who assured Friday night will be remembered fondly, as he tied a career high with six RBIs on a pair of doubles to help the Padres to a 7-2 victory.” His unusual summary line in the final box score was: “4 0 3 6,” with no home runs and no runs scored, but three hits and six RBIs.6

I watched the entire 2020 Opening Day game, but it was from our family room, about 11 miles from Petco Park. I had my unused March 26 Opening Day game ticket nearby and kept score on my trusty self-made scorecard, modeled on the one in my 1952 Cubs scorecard. Even though I was not at Petco Park that evening in July, for me, baseball was back.

The basis for this game report was a project completed by the San Diego Ted Williams SABR Chapter in August 2020 entitled Padres 2020 Opening Day: 9 Viewpoints. In addition to that report and sources cited in the Notes, the author consulted Baseball-Reference.com.

2 According to baseball-reference.com, the Padres’ lowest home-game attendance in their prior 51 seasons was 1,413 on September 11, 1973.

6 Hosmer finished the season with 36 RBIs in 38 games played.