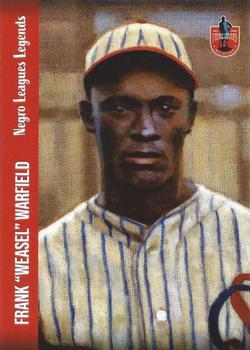 “Night baseball will never happen in Washington,” said Clark Griffith, the president of the Washington Senators and owner of the team’s ballpark. In 1930, Des Moines, Iowa, had hosted the first professional night baseball game. This failed to impress Griffith, who said, “You can make it as strong as you want that I’m opposed to night baseball.”1

Two years after the Senators president went on record, Washington hosted its first night game, at 8:30 P.M. on July 25, 1932. The game would not involve the Senators, but would be played at their ballpark, Griffith Stadium, with the Washington Pilots hosting the Pittsburgh Crawfords in an East-West Negro League game. Although opposed to night baseball and unfamiliar with the Negro Leagues, Griffith planned to attend the game.

In 1931 a “high-powered”2 sports promoter named Doug Smith sought to demonstrate that black major-league baseball would be a success in Washington. He asked Baltimore Black Sox owner George Rossiter to shift a Sunday game from Baltimore’s Maryland Park to Griffith Stadium. Rossiter agreed, and the Black Sox played the Hilldale Daisies before a crowd of 6,000, more than enough fans to convince officials of the East-West Negro League that black baseball would draw in Washington.

“Washington D.C. will be represented in the East-West Colored League!” sportswriter Lloyd P. Thompson wrote in the Pittsburgh Courier in February 1932.3 John Dykes, owner of Washington’s popular Club Prudham, and some associates set about forming a team, which they named the Washington Pilots. They secured a lease at Griffith Stadium for 1932, and demanded that Baltimore owner Rossiter let them hire 35-year-old Negro Leaguer Frank Warfield, highly respected by league officials, players and fans, to manage their team. This request did not sit well with the Black Sox; Warfield was a fan favorite, was a member of Baltimore’s 1929 championship team, and currently served as the team’s business manager. Dykes insisted that his Pilots must have Warfield, and although Rossiter was reluctant, he bitterly honored the request.4

The Pilots owners announced that they hoped to start their home season with a series May 19-21 at Griffith Stadium,5 when the Senators would be making their first of three extended trips through the Midwest. They also had a vision of drawing more fans by experimenting with night games. As the first half of the season progressed, the talk about night baseball in Washington gained momentum, and before the end of the first half it became official. Night games would begin with a game between the Crawfords and Pilots at Griffith Stadium on Monday night, July 25.

After being awarded a franchise, the Pilots had begun to put a team together. Warfield would manage and playing second base. Among others, the owners obtained Mule Suttles, a power-hitting first baseman who hit 21 home runs for the 1928 St. Louis Stars; pitcher Ted Trent, a 21-game winner for the 1928 Stars; and outfielders Willie O’Bryant and Bill Evans. With time needed to blend into a team, the Pilots started slowly and were in last place for much of the season’s first half. Then the team began to jell, and finished the first half in third place. The first half ended on a sour note, though: They were swept by the Pittsburgh Crawfords at Pittsburgh’s Greenlee Field.6

The two teams then prepared to go to Washington to open the season’s second half with a four-game series. On Monday and Wednesday, July 25 and 27, they were to play under temporarily installed klieg lights at Griffith Stadium. On Thursday, July 28, the series would move to Richmond, Virginia, for a day game, and then the series would conclude with a Friday night game at Griffith Stadium. After getting swept by the Crawfords and before leaving Pittsburgh, the Pilots were stunned when their 35-year-old manager Warfield was found dead in his hotel room. The cause of death was not mentioned but was said to be after a brief illness.

As the shocked Pilots team headed to Washington, word of Warfield’s death began to spread. “Negro baseball lost one of its outstanding characters and most skilled players,” wrote W. Rollo Wilson of the Pittsburgh Courier. “His end was sudden and the shock of his going was great, not only to his players, but to fans everywhere.”7

On July 25 a crowd of nearly 4,0008 filed into Griffith Stadium. The left-field bleachers were occupied by 1,000 spectators, delighted that this section was minus the usual exposure to the scorching sun.9 The lights were said to be efficient and bright enough for every play to be clearly viewed from every section in the ballpark.10

The newspapers had projected Ted Trent to be the Pilots’ starting pitcher. But when the home team took the field in the top of the first, it was 30-year-old right-hander Webster McDonald on the mound. McDonald, who had been named the Pilots’ manager to succeed Warfield, had an underhand pitching style, comparable to that of former American League standout Carl Mays and former Senators’ pitcher Ad Liska.

The Crawfords had no problems in solving McDonald’s unorthodox technique. Ted Page, Chester Williams, and Rap Dixon all reached base to lead off the first, and first baseman Jud Wilson’s hit drove in two runs. In the second inning the Crawfords added another run to send McDonald to the showers. Left-hander Leroy Matlock came on in relief, and the 25-year-old rookie held the Crawfords in check through the sixth inning.

Pitching for the Crawfords was veteran William Bell. A black major leaguer for 10 years, Bell was a smart hurler and possessed a wicked curveball. In the bottom of the fourth, the Pilots broke through when center fielder Bill Evans singled to right and stole second and third. Two batters later, Pilots slugger Mule Suttles disappointed the home crowd by striking out. Second baseman Sammy Hughes followed with a walk, but then got trapped between first and second. During the rundown, Evans took off from third and crossed the plate to make the score 3-1.

With the score still 3-1 in the top of the seventh, Rap Dixon of the Crawfords connected with a Matlock pitch. The ball was said to be visible to everyone11 as it sailed into deep center field before disappearing over the fence for a two-run homer to give Pittsburgh a 5-1 lead. In the bottom of the seventh, Suttles, having his difficulties in measuring Bell’s curves, finally timed his swing perfectly and sent a drive to deep center. Crawfords center fielder Ted Page backed up to the fence to make the catch for a long out. An inning later, Suttles batted again. Bell, pitching carefully to the Pilots slugger, struck him out for the second time. And in the ninth the Crawfords hurler capped the win and an eight-strikeout effort by whiffing Pilots catcher Effie Hamilton for the Crawfords’ 17th consecutive win.

Watching the entire game from a front row seat was Clark Griffith. He admitted to a Washington Times sportswriter that he was surprised by the caliber of talent of the East-West Negro League.12 He added that he was now impressed with night baseball.13 However, it wasn’t until 1941, nine years later, that the Senators played their first night game at Griffith Stadium.

Besides the sources cited in the Notes, the author consulted Baseball-Reference.com and Retrosheet.org.

6 The Pilots had the misfortune of running into a red-hot team and the league’s best pitching. The Crawfords entered the series riding a 13-game winning streak. They made it 16 straight by holding the Pilots to six runs in the three-game sweep. The Pilots were manhandled by hurlers Satchel Paige and Double Duty Radcliffe in the first two games, then the least known of the Crawfords pitching trio, Willie Gisentaner, allowed the Pilots only four hits to cap the series.